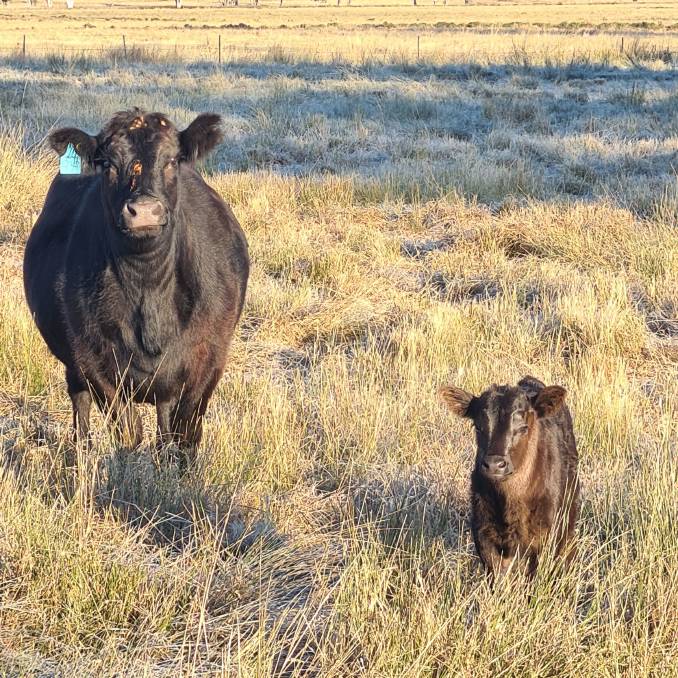 FEED MATCH: The Southwell family calves in June-August and weaner progeny are sold at seven to 11-months-old weighing 240-340kg.

Building-up female inventory and increasing herd fertility is a firm focus at Southwell Grazing Co, based on the north west slopes of New South Wales in the Horton River Valley.

Peter and David Southwell, wives Carmen and Leonie and parents John and Sandra, rely on sourcing high performance bulls that consistently improve female progeny to be able to conceive, rear and turn off well-weighted weaners at seven to 11-months-old.

"This allows us to concentrate on expanding our breeding and calf numbers, without sacrificing feed availability during the cooler months," Peter said.

"Our calves are testament to the sires bred by Sinclair and Hugh Munro's Booroomooka Angus stud being quiet, easy to work with and able to hit the ground running."

The Southwells have been using predominantly Booramooka bloodlines for 18 years.

Mr Southwell said during this period, their female progeny had developed to have a moderate-to-large frame and were highly fertile.

"Fertility is a big priority for us, and our average calving rate sits at about 97 per cent," he said.

"Even in the depth of 2.5 years of recent drought, our herd fertility did not wane.

"We did invest in buying quality hay because we knew the drought would eventually end, and - given today's market conditions - that has paid off.

"Mentally, it was also always a pleasure to look at our cattle in the paddock - even during the tougher times that we had in the past few years."

The Southwells have a three-month joining period from September and calve from June to August.

Weaner progeny not being retained for breeding are sold at seven to 11-months-old at weights of 240-340 kilograms.

These are marketed through Davidson Cameron & Co Livestock agents and AuctionsPlus and there are many repeat buyers for their quality stock, which mostly end-up with backgrounders and finishers.

About 60 to 100 heifer weaners are retained for breeding.

Mr Southwell said carcases from the steer portion were highly marbled and had good muscle.

"In the better seasons we are now having, our commercial herd has really come into its own," he said.

"Essentially we aim to provide quality weaners to the market in March and April and we find this works well with our feed availability."

Being in a medium to high rainfall area allows the Southwells to "dabble" in a range of improved pasture species and grow oaten hay for supplementary feed.

The family's property typically has an abundance of natural grasses, which are value-added to by sowing a range of sub-tropical and perennial species.

Their motto is "a paddock that grows nothing is worth nothing".

"We trucked-in hay during the drought and having water in our paddocks was a life-saver in being able to continue to carry the bulk of our stock through that period," he said.

"Luckily, 2021 is proving to be an exceptional year and in the past 18 months we have experienced some of the best growing conditions ever."

Future plans for the Southwells are to continue to build breeder numbers and increase the productivity of each paddock with improved pastures and water infrastructure investments.

When it comes to genetics, Mr Southwell said they had every confidence the Booroomooka stud was making rapid gains in key profit-driving Angus traits using a range of performance and breeding technologies.

"We rely on the work and research the stud carries out in providing the best bulls for our system and it does not disappoint," he said.

"Due to our stock numbers and calving period in June to August, we need quality, sturdy bulls and are lucky to be able to access these in our immediate area."