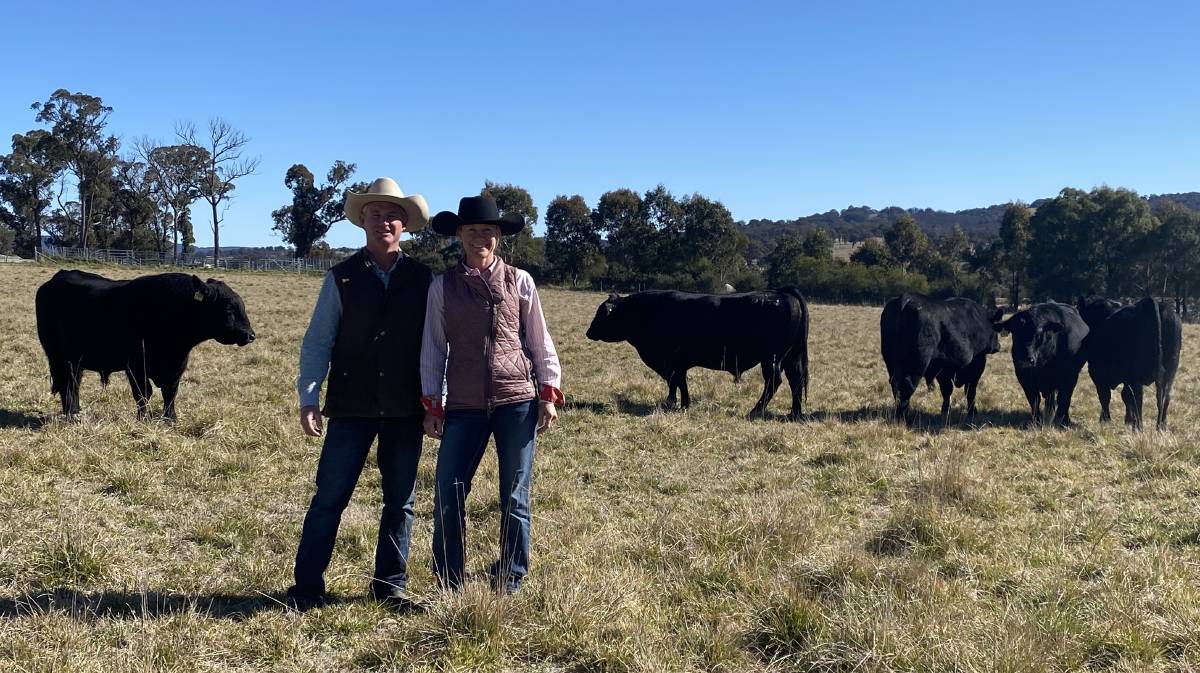 Great genetics: Mark and Camilla Tonkin on their property Wyndella, in Armidale, with a selection of rising three-year-old bulls from Bald Blair Angus.

Mark and Camilla Tonkin's choice to form a pure Angus herd came down to the breed's temperament, proven performance in their New England country, and ease of marketability.

Mark and Camilla Tonkin started their Angus program when they moved back to Armidale, with the purchase of Wyndella, in July 2015.

The Tonkins trade as Tarrawonga Pastoral - named after Mark's father Barry Tonkins' well-known Poll Hereford stud that was established in 1960 and fully dispersed in 1990. They run their breeding and backgrounding business across a small aggregation of three properties from Wyndella, 20km north-east of Armidale.

In December, 2017, they bought nearby Gatcombe at auction and, in November, 2019, they acquired adjoining block Spearmont. The combined aggregation totals 984ha and has a carrying capacity of 500 breeding cows. The business is EUCAS-accredited and is run HGP-free.

Their country comprises highly variable topography and land classification, ranging from gently undulating, improved ,cleared and recently pasture-improved land in the west - where the farm structural improvements are - to undulating, unimproved, green timbered, basalt and granite country in the north. Soil types vary from good quality, loamy, fine granite in the west to good quality, basalt soils on Gatcombe in the north.

Mr Tonkin said with 426mm in the gauge so far this year, they were faring much better now relative to 2019, when they received 243mm.

"Our country is looking fairly fresh, which is unseasonal for this time of year."

With the purchase of Wyndella, the family's strategy was to create and maintain a sustainable farming operation supported by an established off-farm business. This has helped them with an aggressive development program and cash flow in tough years.

"When we came back to the New England region we fortunately had complete flexibility to choose our own farm business enterprise mix and/or breeding pathway," Mr Tonkin said.

Their choice to form a pure Angus herd came down to the breed's temperament, proven performance in their New England country, and ease of marketability.

"The consumer is king, and Angus has done a top job in marketing Angus beef domestically and abroad," Mr Tonkin said.

In the Tonkins' program, bulls are joined with the cows from October 15 to December 24, and with the heifers from two weeks earlier.

"For our heifers, we use a six-week joining cycle, season dependent," Mr Tonkin said.

"This year, we're going to AI 200 heifers with Peter Brown, of Bovine Breeders, to Bald Blair heifer bulls that have indices in the top 5 per cent for growth, good eye muscle area and intramuscular fat greater than +2.2.

"These heifers are currently in herd at Bald Blair, with semen provided by stud principals Sam and Kirsty White.

"We will use two bulls to spread the genetics."

Mr Tonkin said in a typical season they are quite strict on culling.

"At present we've eased off on the pressure we place on our breeders, while we rebuild our numbers post-drought," he said.

"We have still achieved an 80pc PTIC rate in the drought. This year our cows and heifers, respectively, reached 95pc and 94pc PTIC.

"We left the bulls in with heifers for 10 weeks to maximise calves to accelerate our herd rebuild."

Steers are sold into the feedlot market at 12 to 16 months old, weighing 450kg or more, and cull heifers - marketed as carrying Bald Blair genetics - are sold through AuctionsPlus.

"Two years ago we moved towards having just one stud provide our stud bulls for our self-replacing commercial herd," he said.

"We chose Bald Blair due to its excellent genetics and our relationship with the Whites. We also have Sam Newsome, Newsome Agriculture, as our agribusiness consultant and we're part of his benchmarking group.

"Bald Blair's focus on using modern breeding technology, EBVs and genomics - combined with how tough Sam is on culling his sale bulls - greatly helped in leading us to this decision.

"Sam has a very high standard on bulls he offers for sale and a rigorous process he abides by. You know every individual bull has gone through that process, which also uses several external providers. The bulls have a superior genetic base, with a focus on broad genetics within their herd."

Mr Tonkin said every calf born in their Tarrawonga herd in the past two years was by Bald Blair stud bulls.

"Sam recently went through our cow herd, looked at our bulls and took a copy of their EBVs."

Barry Tonkin had been buying Bald Blair bulls since the early 2000s, which is what led to Mark and Camilla purchasing their first Bald Blair bulls - from Barry - when he sold his property in 2016.