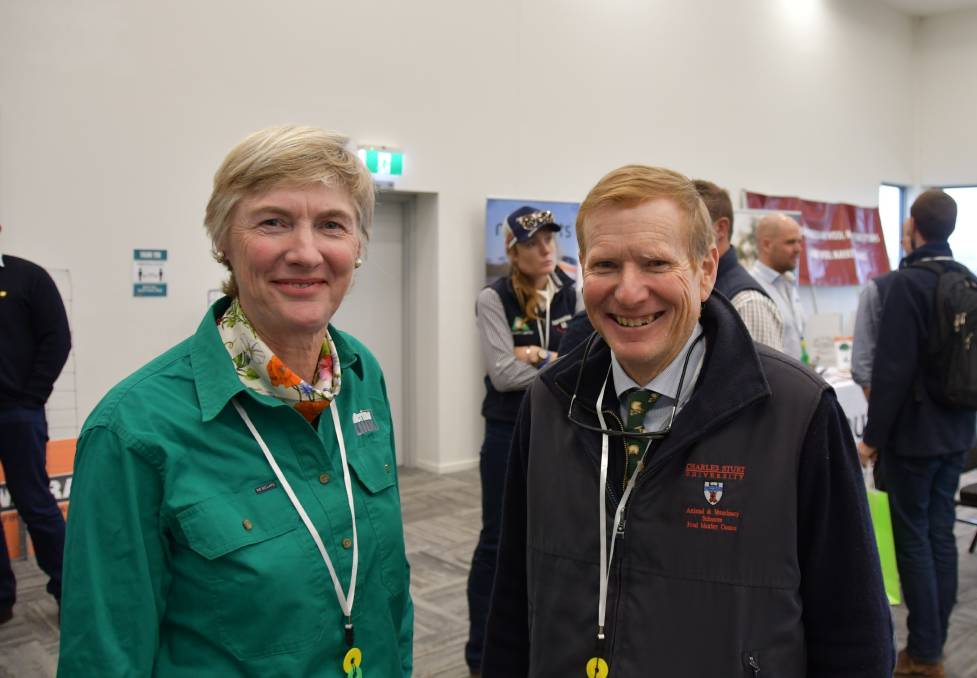 AWI director Michelle Humphries with Professor Bruce Allworth during a break in proceedings at the 2021 MerinoLink conference in Wagga Wagga.

Sheep producers should not be complacent about international issues concerning the farmers methods of production.

The current positive state of agriculture is encouraging but sheep producers should not be complacent about international issues concerning the farmers methods of production.

That was the message coming out of the MerinoLink 2021 conference held in Wagga Wagga, where Professor Bruce Allworth, director of the Fred Morley Centre, School of Animal and Veterinary Sciences, Charles Sturt University, Wagga Wagga focused on the perception of consumers abroad for Australian products.

"Everyone can tell you that animal welfare is becoming increasingly important, both from a producer perspective and clearly from a consumer perspective, " Prof Allworth told the crowd.

One of those expectations is centred on animal welfare and how well the animals are looked after during their lifetimes.

"And irrespective of legislation, international demand for ethically produced products is increasing."

Many producers are concerned about the impact of legislation on the farming operations, but Professor Allworth noted in terms of of animal welfare it is almost past legislation because of the input from consumers and the manner in which global brands are now requiring certain activities to occur in terms of animal welfare so they can register there association with ethical production.

"As producers we will be under increasing pressure over how we handle our animals and whether that is legislated or not is largely irrelevant," he said.

"The major food and fibre producing countries in the world are under pressure to show where they sit in their response to animal welfare.

"You may well say we run things differently here in Australia, it doesn't really matter what happens in Europe."

But, Professor Allworth pointed out, they are our customers and they have certain expectations, often closely aligned with their domestic animal welfare standards.

A recent meeting with senior health staff from a European country and organised through the Department of Foreign Affairs and Trade highlighted the European perception.

"There issue is that they have regulations which require their producers to operate under certain animal welfare requirements which are much higher than ours and they are wondering why they are allowed to import products that have come from animals of a lower welfare standard," Prof Allworth said.

"Whether we like it or not, that is the sort of influence we are going under so we must make sure we are ahead of the game."