JR McDonald, founder of Bindaree Beef, was a champion of the beef industry and a vocal advocate of the producer. An industry mourns his passing. 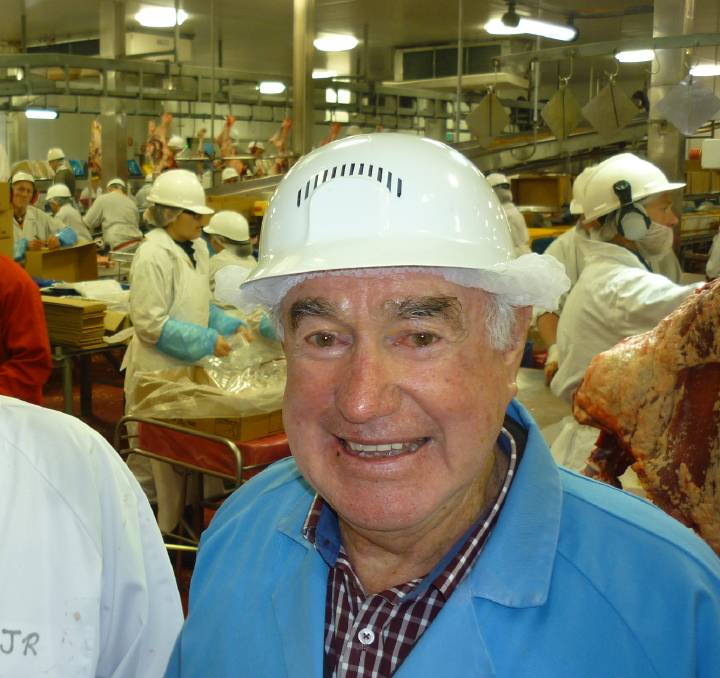 JR McDonald in his working clothes at Bindaree Beef. The industry advocate passed quietly at home on Tuesday after battling a long illness.

JR McDonald, founder of Bindaree Beef at Inverell and long-time advocate of the cattle producer - having come from humble stock in the first instance - passed away quietly on Tuesday at his Byron Bay home after battling a long illness.

Aged 86, he leaves behind his wife of more than 60 years Norma, son Andrew, who continues to manage the business, and four daughters Tarnya, Leigh, Kerri and Tracey.

Mr McDonald was born at Doon Doon in the shadow of Mount Warning, in the Tweed Valley, the son of a bullocky and beef producer who struggled to make ends meet at times, given the nature of the industry.

His mother once told the young boy, "when poverty comes in the door, love goes out the window" and he vowed to make good in his life, which he did.

"I learned a lesson back then," he recalled. "Make sure you have a market before you sell your produce."

When he left home aged 13 he rode a pony to the headwaters of the Wilsons River catchment and caught a calf truck to Casino where he began a career drafting cattle for slaughter.

He continued in that vein when he moved to Sydney, creating niche export markets for processed product and at the same time kept up operations at Casino with a loyal and hardworking staff, his father among them.

Always one to stay a step ahead of the pack, he bought into an old state-owned abattoir at Dubbo and went hard in the game, with buyers recalling that he had only one fault; he never knew when to pull up.

But outside events conspired against him at Dubbo and he, like many entrepreneurs before him, went to the wall financially.

During the long struggle for success he never lost sight of his producer roots and his defence of the breeding and backgrounding industry often led to ostracism from main players in the processing game.

In the meantime processing competition is diminishing along with opportunity for regional employment while consumption of red meat continues to fall.

"Since 1998 when the average Australian consumed 43kg of red meat per person every year we are down to 24kg per person translating to 480,000 tonnes of product lost to the domestic consumer," he was quoted as saying. "Since 1980 more than 100 abattoirs have closed their doors."

Mr McDonald blamed Meat Standards Australia for failing to stem the decline, making its grading system too complex for the consumer, with too many animals of dubious quality included in its grid.

"We need practical solutions, not rhetoric," Mr McDonald said at that time - just before the last Federal election - and he took aim at Barnaby Joyce's lack of direction for rural and regional prosperity. JR's three point plan started with accountancy and transparency of levy funds directed at peak industry bodies. Another key step in his list of actions was the immediate freeze on fees and charges to the producer.

He was quick to lay blame for the lack of action on complicit politicians.

"For producers to continue to vote National at every election year in and year out and to expect change is a sign of insanity," he said.