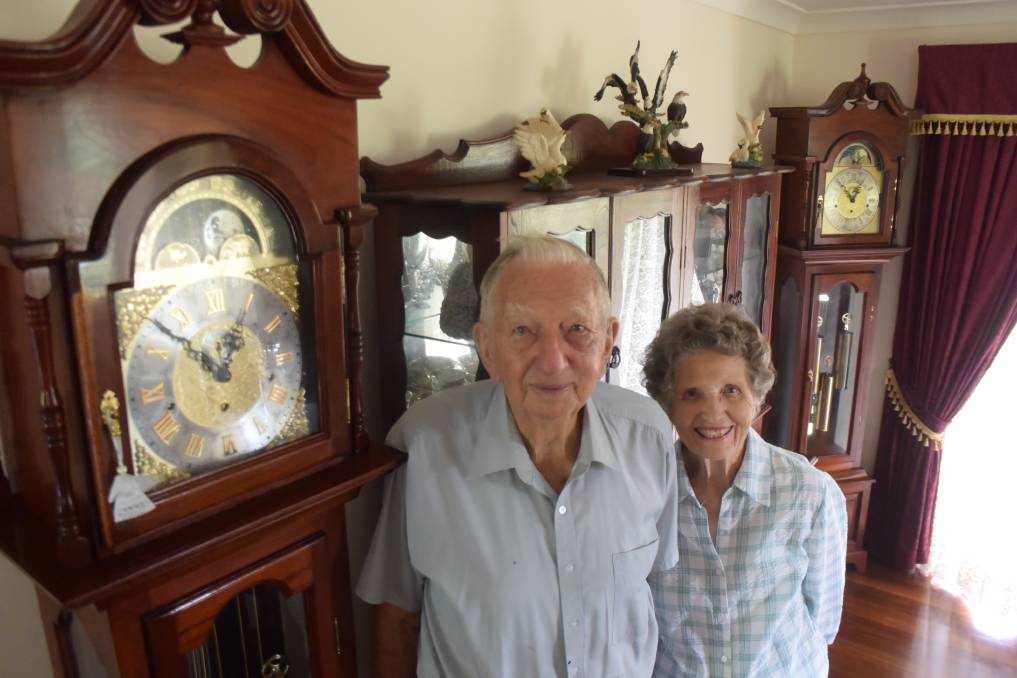 Clocks, cabinetry and curtains resonate in the finished living room of Eric and Lois Muller at Rukenvale via Kyogle.

A lifetime's practice at skill and patience

Eric and Lois Muller have always loved timber and lace and the proof is in their home, which they completed themselves and which looks out on paddocks of tropical pasture. Here grows Santa Gertrudis/Hereford cross cattle, along the southern slopes of the Border Ranges at Rukenvale near Kyogle.

The interior glows with timber hues contrasted by velvet curtains backed by fine white lace and all up the presentation shows devotion to craft.

"As a kid I was self taught," recalled 92 year Eric. "As a 12 year old I did woodwork one day a fortnight at the rural technology school at Boonah, Qld.

I went to lots of different schools in the depression. My father was a share farmer and worked wherever he could."

"My interest in woodwork got me away from school and that was good. With mitts the size of shovels I knew I was not cut out for academia."

Lois grew up on a dairy farm at Mount Crosby, near Ipswich, Qld, and was taught to sew and wield a crochet needle by her mother. "It was something you did in those days," she recalled.

The couple met at a dance at Ipswich, Qld in 1953 when Lois, 16, worked in a factory sewing mens' suits and Eric, 20, milked cows and delivered milk. They built their first home at nearby Raceview, levelling the site with a pick and shovel before carting the spoil away in a wheelbarrow. Two years later, after they were married, they moved into their new home to raise three children - Lois, Denise and Ian.

Those were full days, with Eric starting at 1am delivering milk to shops in the outskirts of Brisbane before travelling to the dairy farm at Minden, half an hour's drive west from Ipswich.

"When Eric got home he would lie on the floor while I was mashing the vegetables and I would say: Don't close your eyes! But by the time I served dinner he would be sound asleep," recalled Lois.

In 1972, after their children had been educated, the couple bought an affordable farm at Roseberry Creek near Kyogle and made the switch to beef.

"I was sick of milking cows," said Eric. "So was Lois. As a child she used to help milk 30 cows by hand. 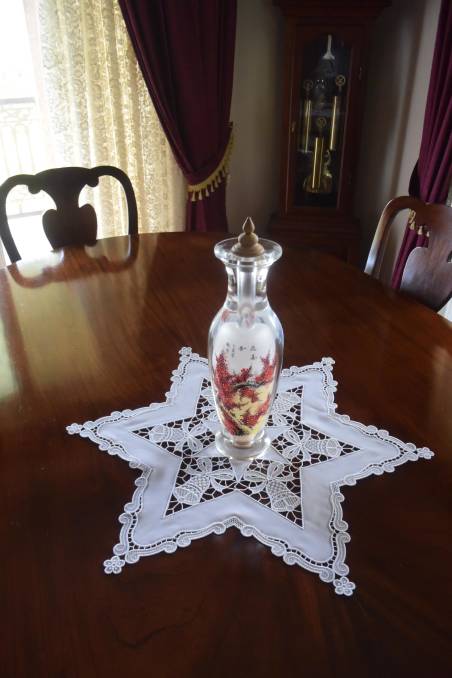 A finely embroidered doily made by Lois graces a red cedar table carved by Errol. The curtains and the clock are their creations.

"This was Hereford country when we came and we eventually topped the market at Kyogle with our Santa Gertrudis/Hereford calves that were able to produce more weight at an earlier age."

The couple spent a lot of time cleaning up that farm, re-stringing fences and removing lantana and Crofton weed and rebuilding the old home.

When the couple sold up and retired to nearby Rukenvale they were able to finish off another new home to their liking, again using local timber.

Timbers milled from trees harvested on the property and nearby were set up right using a water level. Eric helped in the construction of that house.

"It was like building a big box," he recalled.

To finish the design he used silky oak with its lovely lattice pattern when quarter-sawn, along with red cedar - with a lustre to lust for - combined with the working ease of straight-grained, soft wood. All the timber he felled and milled, so when he rubs a hand over the veneer the act ignites a fair share of memory, and emotion.

The banister that leads upstairs was created from a length of clear myall, common enough in the swamps around Myrtle Creek via Whiporie, but not very well known outside that locality. The colour is deceivingly peachy. Eric carved the three-piece sculpture at night and Lois sanded it by day before many coats of varnish.

After dinner was a quiet time with Eric tinkering with increasingly intricate woodwork projects. "You had to be precise and careful. Everything had to fit," he recalled.

Grandfather clocks were assembled from turned pieces of red cedar milled from old paddocks trees off their own property and are a testament to his patience and focus with a total of nine pieces completed. Six of those remain in their house, all chiming on the hour, while there is one in each of the homes belonging to their children. The intention is that all nine grandchildren will one day inherit their own work of art.

"I got the idea for making the clocks from a picture in a woodworking magazine," Eric recalled. "There were no plans.

"In the article it said this was not a project for amateurs, but we proved them wrong!

"I did a little bit at night time. You start with a hand saw and a chisel. You had to be precise and careful. Everything has got to fit.

Neither did Lois, because she spent the evening hours sitting at the cedar table and working her fine needles to create the most detailed knotted works of art, commonly called embroidery.

"Eric would start his project with a hand chisel," she said. "I would begin with a ball of cotton and a crochet hook."

How did you meet the love of your life?