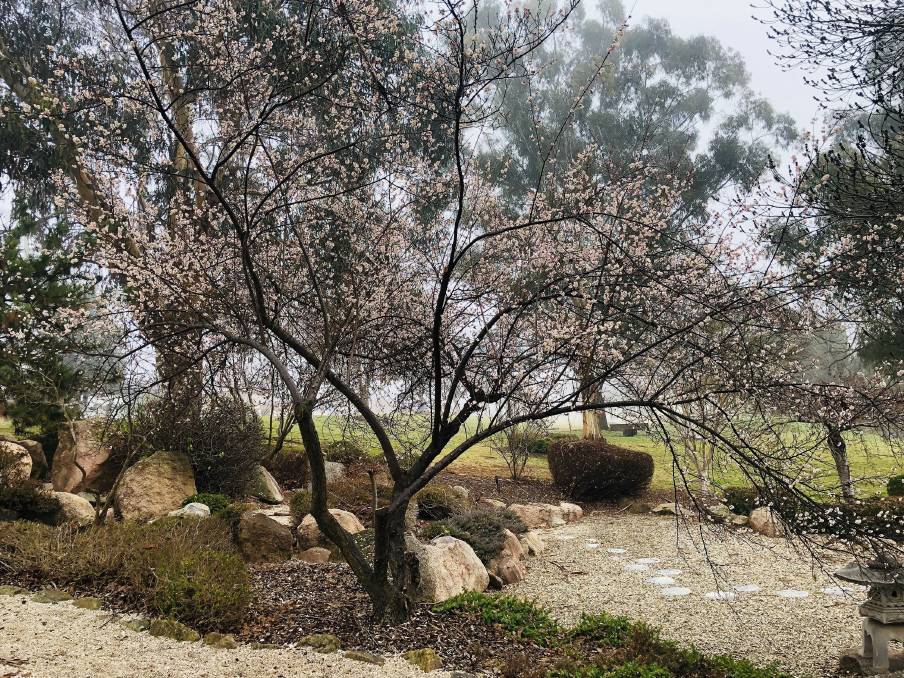 The Japanese apricot tree originally came from China where it is known somewhat misleadingly as Chinese plum.

OF ALL the plants that bloom in the depths of winter, the Japanese apricot (Prunus mume) is my total favourite.

I saw one this week on an early morning walk after a bitter frost, its pale pink blossom shining through thick fog, lightening my heart and reminding me that the shortest day has come and gone, and spring will soon be here.

Flowering apricots generally grow from three to five metres tall and develop a graceful, spreading crown at an early age.

The five-petalled flowers vary from single to fully double, from pure white to dark pink, and are sweetly scented. They emerge on the bare branches and if cut while in bud, will open in the warmth of indoors. They like an open, sunny position and are reliably frost-hardy.

They tolerate most soils but if your soil is acid, they love some extra lime. Although reasonably drought hardy, they appreciate extra water in hot weather.

The Japanese apricot tree originally came from China where it has been grown and loved for centuries and is known somewhat misleadingly as Chinese plum.

Numerous varieties were grown as ornamentals from the fourth century AD, but Chinese gardeners have cultivated the wild tree for several thousand years for its small hairy fruit. These are the basis of plum sauce, an essential component of Chinese cuisine, and were used by cooks for their sour flavour until the invention of vinegar.

Peter Valder in The Garden Plants of China (1999) describes the taste of the fruit from a cultivar of P. 'Geisha', that grew in his family garden during his youth, as having an acidity and astringency so strong that he wondered if his mouth would ever recover.

The apricot tree came to Europe via Japan, where it was as much loved as it was in China and where it had also been cultivated for centuries. It was introduced by the doctor, botanist and traveller Philipp von Siebold (1796-1866), resident physician to the Dutch trading post at Deshima, near Nagasaki from 1823.

Siebold had enormous success collecting plants previously unknown outside Japan: the Japanese allowed him special privileges because he was an eye specialist and many of them suffered from poor eyesight.

His botanical name for his introduction, P. mume, is a copy of the Japanese pronunciation of the plant's Chinese name.

Together with the mighty pine and the straight bamboo, the winter flowering 'plum' is known in Chinese culture as one of the 'three friends in frostiness'.

Thriving in harsh conditions, they appear together regularly in gardens, paintings and poetry, where they represent the human characteristic of mutual support in adversity. The flowering apricot has another, slightly more sinister meaning, as a metaphor for a young wife having an affair, unsuspected by her husband.

If you prefer to avoid a plant open to any questionable interpretations, however symbolic, the glorious Japanese cherry P. x subhirtella 'Autumnalis' also flowers in winter and thrives in highland and inland NSW.