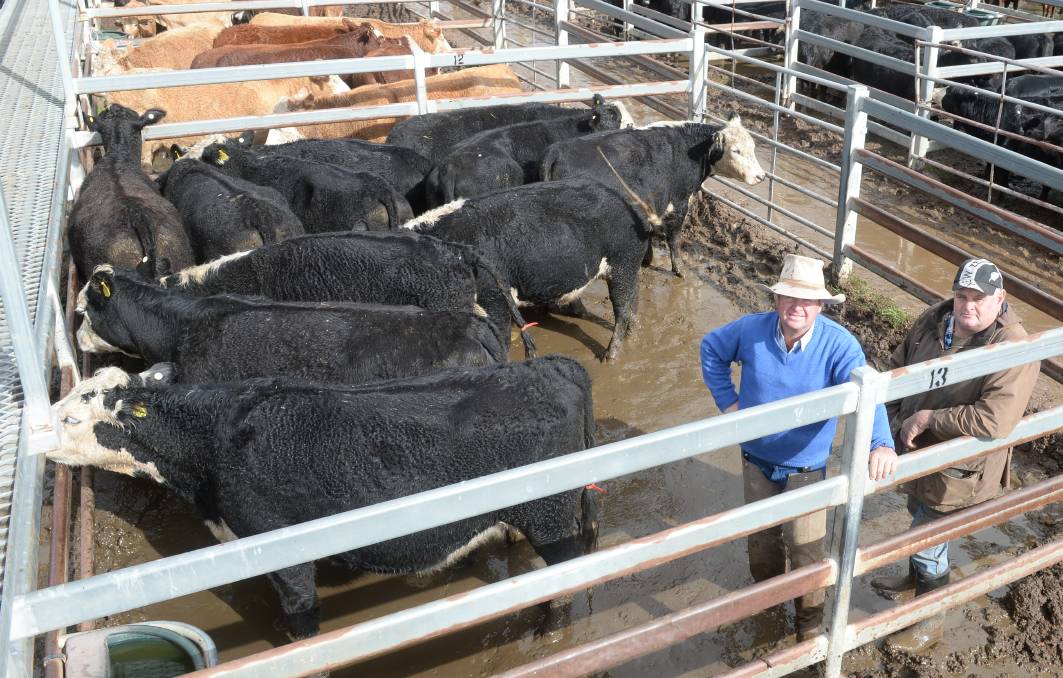 These 11 black baldy heifers PTIC for their first calf sold at $2525 a head for Wayne Schneider, Wollombi, Geurie, (pictured at right) with agent Mark Garland of PT Lord Dakin, Dubbo.

Females were popular, according to local agent Jamie Stuart of Milling Stuart Pty Ltd, who conducted the sale in association with PT Lord Dakin and Associates, Dubbo.

"Overall, it was a very good quality yarding of 1200 head with buyers coming from Wellington, Coonamble, Warren, Orange, Bathurst plus strong local support.

"We didn't have too may steers today with much weight on them, but they still sold extremely well. 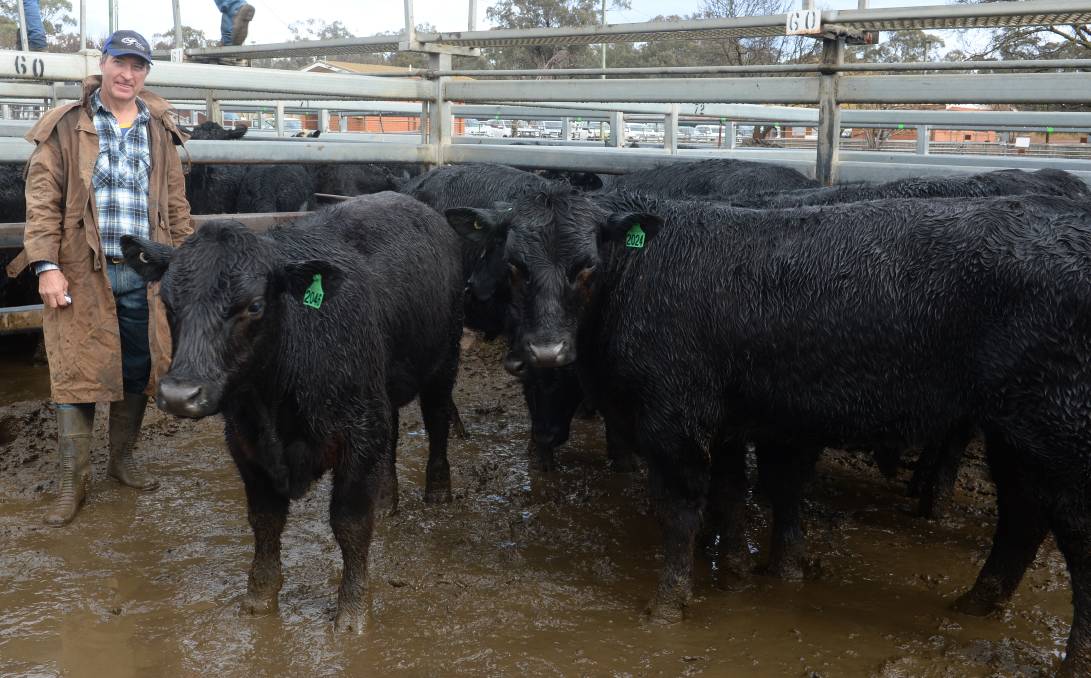 Wellington livestock carrier Paul Evison with the six Angus yearling steers which topped the steer section at $1910 a head. These will go to a Wellington feedlot for 10 to 12 weeks before marketing in the prime cattle pens.

"We didn't have the heavier run of cattle of previous sales where there were plenty of steers weighing nothing under 300 kilograms, so people may say the sale was cheaper, but there were young cattle today," Mr Garland said.

"Cows with calves were firm to dearer to what we've seen recently with mainly three-in-one units offered. However the highlight of the day were preg-tested heifers and cows, and the heifer weaners."

"That's what it comes down to. The herd rebuild is still on."

The top-priced pen of steers at $1910 a head were six Angus yearlings offered by Mick Sheldon, Wollar, and purchased by a Wellington restocker for feedlotting for 10 to 12 weeks before reselling in the prime pens.

Mr Sheldon also topped the PTIC heifer section with his pen of 20 Angus weaner heifers of Rennylee blood making $1840 each.

Molly and Maisy Jones, Mendooran, offered a pen of Charolais heifers PTIC to Angus bulls which sold at the top joined heifer price of $2575 a head.

David Thorne, Summer Vale, Gulgong, offered a pen of Angus/Santa Gertrudis-cross steers 12 to 13 months which made $1830 a head.

Mr Thorne said he had also sold some weaner heifers that made $1430 /hd which were out of older cows he bought PTIC six months ago for $1250/hd.

"I thought I might have been paying too much for the cows then, but the gamble paid off," he said.

"These were milk-tooth heifers about 18 to 20 months," Jamie said.

David and Robyn Croft, Dunedoo, sold middle-aged Angus-cross cows with Hereford calves at foot of one-to-two months of age. These made $2925 a unit.