It's the best planting period Sam Heagney has seen in his nine years in the region. 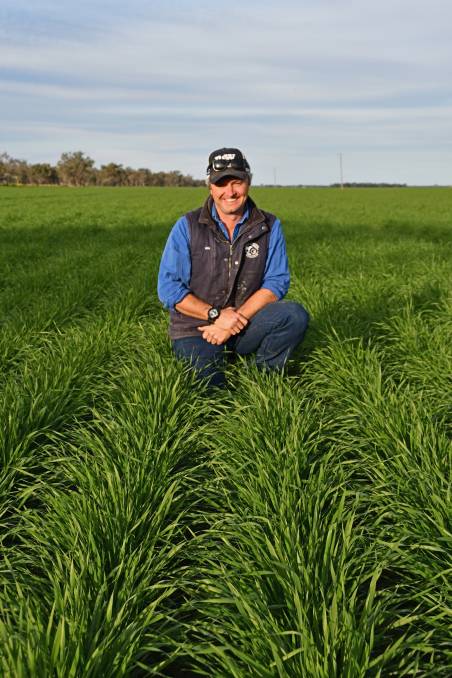 The 2021 winter cropping season is shaping up to be one to remember for Mungindi grower Sam Heagney. Photo: Billy Jupp

YEARS of drought have been washed away by one of the best starts in a decade for one Mungindi grower.

Sam Heagney has been among the growers across the district that endured lean years from 2017-2019 and returned a positive result last year.

However, unlike some growers in the region, Mr Heagney missed out on bumper yields last year but that looks like changing this time around.

"I've been here nine years and this is the best planting period we've had since I've been here," Mr Heagney said.

"We don't want to get too excited, but it is shaping up nicely and our soil has a full moisture profile.

"We've not had to use the moisture probe because every where we went it went all the way in, which made a change from those dry years."

As part of his cropping rotation, Mr Heagney planted PBR Commander variety barley in mid-May, which received it's first in-crop spray last week, as well as wheat and chickpeas.

"We had a flood over the area the barley is going into in March and then it dried out nicely in April and May.

"That was perfect because it allowed us to get it in on time and since then we've had fairly consistent rainfall, which has kept it pretty wet.

"Fortunately, mice haven't been a real problem for us in terms of planting, we are conscious of them but it certainly hasn't been a problem, which is good."

Several paddocks have also been set aside for dryland sorghum and dryland cotton.

"The sorghum paddock is one we couldn't plant because it's too wet to get to," Mr Heagney said.

"The profile is still really wet, so we're confident we will have a full profile to plant into come later in the year, and from there it should only take some regular small showers to keep it going."

Mr Heagney said he put down last year's results down to inconsistent rainfall across the region. "We had a good year in 2016 but then 17',18' and 19' were all terrible.

"To go from three disasters to a good year last year was nice, but last year was a bit drier than other nearby areas, which lead to a bang-on average year for us.

"It was quite interesting really because to the east and west of us there was a four tonne change in wheat yields.

"I put that down to just having less rain but if you went 10 kilometres west it was much better but in saying that, last year was still a magnificent year but this year looks as though this season is full of promise as well."

Mr Heagney said it was crucial for producers recovering from drought to record two strong years in a row.

"We only had an average year last year and that certainly doesn't fix up three disasters," he said.

"You've got to put a few good years together to make up for those disasters."

Scheduled to be harvested in late October, Mr Heagney said late-spring rain would provide the ideal finish to the season.

"If anything, our biggest worry might be that it could be too wet for us to get into it, if you can believe that," he said.

"However, there isn't much we can do about that, we just have to make the best of whatever comes.

"The barley will take whatever gets thrown at it now, just as long as it doesn't get another flood on it should be pretty right."

As for plans after harvest, Mr Heagney said his operation would be utilising grain storage options.

"We avoid forward-selling our crop here because it can be a bit marginal so we will be looking to store it and sell it off-farm."