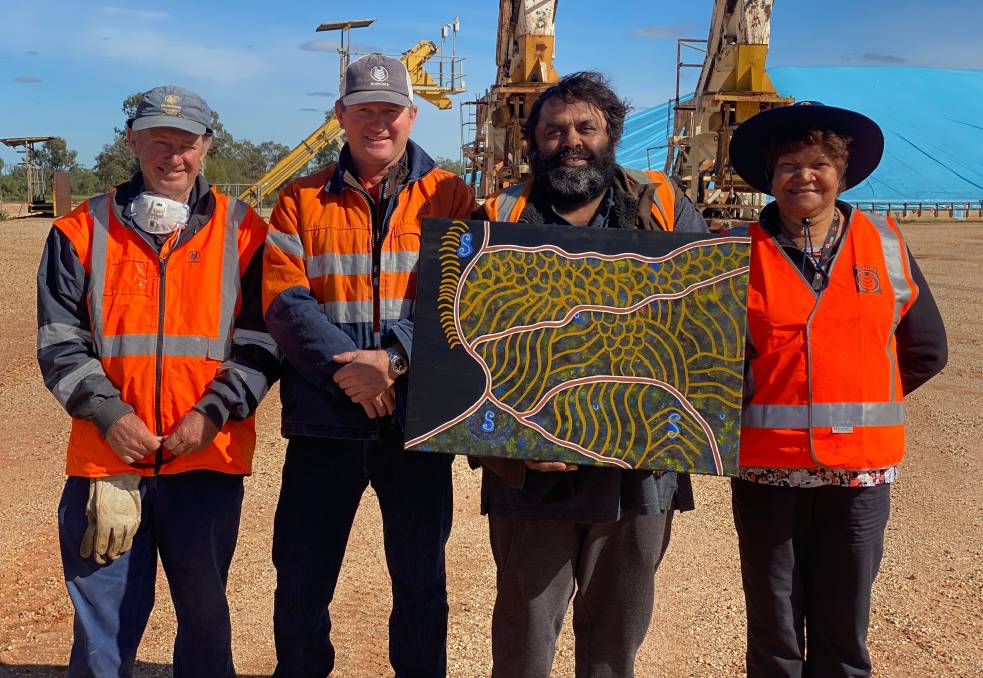 The first of the five murals was unveiled at GrainCorp's Walgett site.

GRAIN receivals across the state's North West and Western regions are set to be brought to life in honour of NAIDOC Week.

The proud Gamilaroi man teamed up with the Walgett Police Citizens Youth Club (PCYC) as part of a program to help engage with and inspire young Indigenous kids across the district.

"Painting is an important part of Aboriginal culture and one that must be passed down to younger generations," Mr Ferguson said.

"Teaching the youth and engaging them through art is one of the ways we come together and connect with country.

As part of the program with the Walgett PCYC, Mr Ferguson will guide local youngsters from all parts of the community through the process of creating the five murals, which when placed together, will create an Aboriginal map of the country all five of GraiCorp's sites are situated on.

The first of the five murals was unveiled at the Walgett site, which plays a vital role in the Walgett economy and community, of which approximately half of the community members identify as Aboriginal.

Mr Ferguson said he developed the design for the murals and said they will be an extension of each other to invoke "connectedness with country."

"The blackness in the design represents the Gamilaroi people and the black soil; the long lines are the rivers and creeks; the short lines are the gullies and low-lying country; and the sitting symbols are the GrainCorp sites," Mr Ferguson said.

The latest work is not the first time Mr Ferguson has engaged with local youth in the Walgett community as he regularly works with schools, police, government agencies and councils to pass on local Aboriginal art and cultural knowledge.

"GrainCorp plays a key role in local communities as a major employer across the Walgett Shire region," he said.

"The region is home to a large Aboriginal population, so it's important to us that we foster our connections with the youth of the community and provide education and employment opportunities where we can.

"This project is a fantastic opportunity to amplify this year's theme of Heal Country well beyond the events of NAIDOC Week, and to bring young people together to celebrate our First Nation's people's history and culture."

Once complete, the murals will be hung on the front gates of all five of the GrainCorp sites to allow visitors and travellers to enjoy them.

GrainCorp's celebrations come as of community groups across the state marked NAIDOC Week in number of different ways including; a special Indigenous round in the AFL North West competition, traditional smoking ceremonies and art exhibitions in towns across the state.

While over in Tamworth, the Tamworth Swans v Gunnedah Bulldogs games were begun with a traditional smoking ceremony hosted by Kamilaroi man Len Waters.

Tamworth Regional Council helped mark the special occasion by painting a variety of Kamilaroi phrases on Tamworth No.1 Oval for the highly-anticipated games.