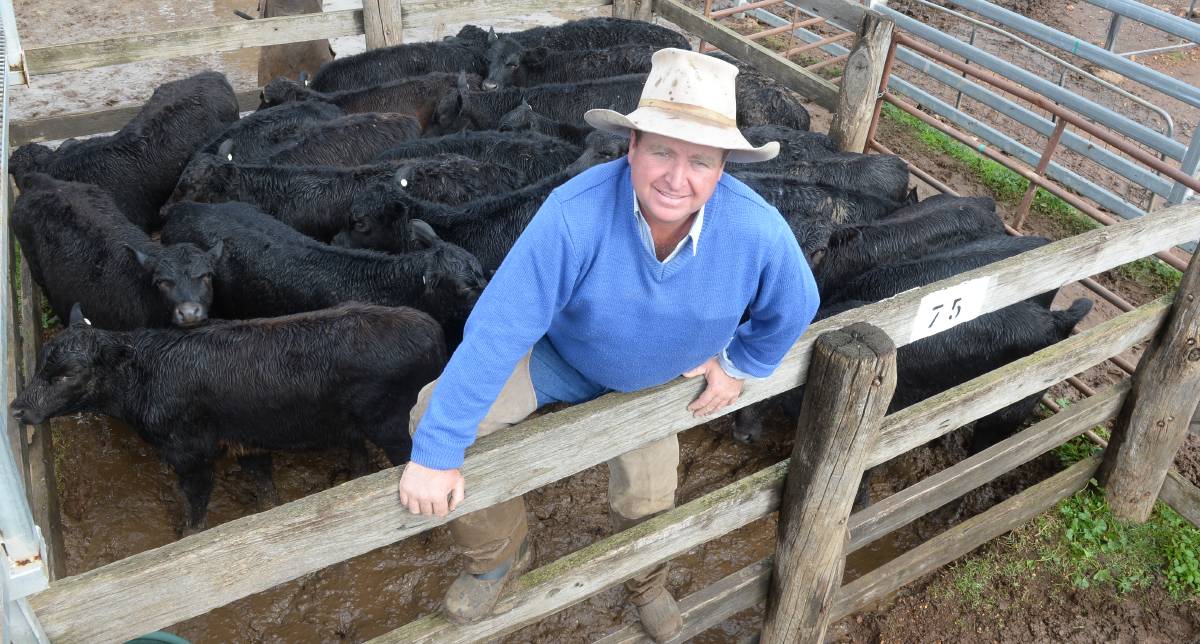 PT Lord, Dakin and Associates agent Mark Garland, Dubbo, with a pen of Angus steers suitable for restockers to value-add.

Restockers see money standing in prime cattle markets and in some cases are pushing processors out of the price ballpark.

RESTOCKERS have been pushing out processors for trade-type steers and heifers in prime cattle sales, particularly in the Central West as they continue their herd rebuild.

PT Lord, Dakin and Associates agent, Mark Garland, Dubbo, said it's a grass market again and the feeder steer grid has lifted to well over 500 cents a kilogram (live weight).

"At this rate restockers can see some light at the end of the tunnel and are prepared to pay more for stock," Mr Garland said.

"The market for finished feeder product is very strong and there's plenty of potential to come out the other end and still be in front, even with the high rates being paid."

Mr Garland agrees that it is dear to buy, "but when you can get that good money at the other end, the equation equals out pretty well".

AJF Brien and Sons agent Peter O'Connor, Coonamble, said feeder rates seemed to be the benchmark around the markets.

"When you see the feeder rate lift to well in excess of 500c/kg and up to 540c/kg it probably gives restockers a bit of encouragement to spend a bit more money on the smaller cattle," he said.

"But it doesn't necessarily mean that those smaller cattle, when they are ready, will be worth the 540c/kg, and that's the scary part."

However, at the moment restockers seem to be prepared to go there, he said.

In the North West of the state, Lehman Stock and Property co-principal Ben Lehman, Inverell, said it was all very well to be paying up to 540c/kg for a black steer.

"It gives cockies confidence to go back into the market and find lighter steers. But for the past 16 to 18 months the biggest problem is adjusting to these price levels," he said.

"The potential profit margin is slimmer."

However, there was a different trend happening in the Riverina where processors and lotfeeders were taking all heavy cattle with not a lot of restocker competition.

"Most cattle in Monday's 2500-head yarding were heavy and went to either the processors or feedlots," he said. "There's not a lot of restocker action because the cattle are too heavy."

He said at Monday's prime sale a line of 150 bullocks split into two pens made 539.2c/kg and weighed 470kg with the seconds weighing 440kg.

"It's not so much the grid price, but more the fact that the lotfeeders just wanted a few numbers, and last week there was a pen of bullocks that weighed 701kg average selling for 445c/kg, that's $3200 a head."