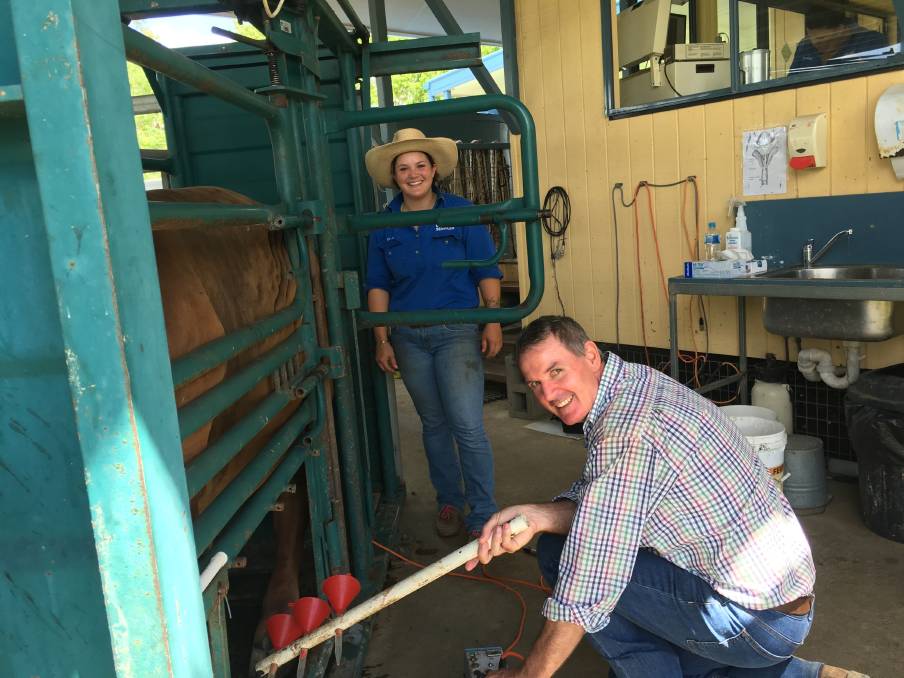 Commercial producers are urged to get bulls tested and checked annually.

Once upon a time, semen testing was only done for a stud bull before he hit the sale ring.

But semen testing bulls in commercial operations is gaining momentum, and given the price producers are paying for bulls, it makes sense to ensure they are up to the job. And it's a good idea to do it yearly.

Kristen Fredericksen knows better than most how important it is to have performing bulls. Her family owns Dalwhinnie Angus stud near Orange, NSW, and she also semen tests bulls through her business KB Livestock Services.

And in her four years of doing semen testing, she has seen an increase of interest from Central West commercial breeders.

Ms Fredericksen used to be based in Queensland, and found there were more producers testing their bulls in the state than in NSW, but it seems that word has crossed the border.

She said the price of bulls had encouraged producers to test.

"They used to just cop the fallout if something happened, but now because of the price of bulls, it's only a couple of hundred dollars to get the test done," she said.

Ms Fredericksen, who also carries out AI and pregnancy testing with James Sutton from Sutton Breeding Services, said many commercial producers who had never semen tested before were interested how the process worked.

She suggests testing bulls at least eight weeks before joining, so producers have plenty of time to replace a bull or retest if needed.

Once she has collected the semen sample, she looks at it under a microscope to check the motility of the sperm, the percentage alive and their activity.

Then she sends one drop of the semen to a professional morphologist, where they take 200 sperm and count the number with abnormalities.

"I'm a big advocate for morphology. It detects the little defects in the sperm that might prevent them from fertilising," she said.

She also checks out the bull's physical profile, such as his head, feet, jaw and joints.

To have the best chance of getting high pregnancy rates, you need to semen and morphology test just prior to bulls being out with cows. - Paul Kenny, Paul Kenny Cattle Breeding Services

She also palpates and measures the testes, as well as checking the internal reproduction organs.

"The test only takes five to 10 minutes for each bull," she said.

She also encourages producers to take good care of their younger bulls, especially when it comes to nutrition and other bulls.

"Make sure you socialise them properly, and keep up to date with vaccinations, such as for pestivirus," she said.

For Paul Kenny, semen testing bulls is a huge part of his job, whether for a stud or a commercial set-up.

In 1993 he started his own business as an artificial breeding technician and consultant in Queensland.

And interestingly, one of the first semen testing jobs he did was for a commercial enterprise.

Mr Kenny said even though semen testing bulls in commercial operations has slowly grown, it has really ramped up over the past five years. And he reckons this is a good move by producers.

Mr Kenny, who travels into Central NSW and out to western Queensland, tests about 5000 bulls a year. And about 1700 of those bulls are in commercial enterprises.

He collects semen using both the electro ejaculator (probe) and artificial vagina.

He said when testing bulls, it was important to analyse the percentage of alive/motile sperm and also study the sperm morphology of each bull.

"Morphology of sperm is a discussion that can go on for hours, but at the end of the day, sperm morphology is vital in determining if that bull will get that cow in calf," he said. "A bull may be sick or recently injured and any stress reduces the quality of semen.

"If this is the case, test him again. The more the bull ejaculates, the higher the chance of improving the semen quality.

To have the best chance of getting high pregnancy rates, you need semen and morphology tests just prior to bulls being out with cows. Management and profitability wise, it's ideal to get all your cows in calf at a similar time.

And while semen quality is one component of getting cows in calf, Mr Kenny said producers should try to observe the bull serving a cow to ensure the bull had a libido and was capable of serving the cow. He has visited artificial breeding centres and worked with technicians in a number of countries, including New Zealand, Germany, Japan and Switzerland to learn from their techniques to exchange ideas, theories and practices of cattle breeding technologies.

Mr Kenny said successful herd management was measured by calves born, and an important equation was mentioned in Animal Andrology: Theories and Applications, by Steven P Lorton and Peter Chenoweth (the Bartlett 1978 Equation of Reproduction).

Can he do the job?

After 50 years of semen testing bulls, Ian Moreland says a bull's capability of serving a cow is paramount.

Mr Moreland, Studcare Genetics, Gildaroy, Victoria, said often a bull's physical ability to serve cows was overlooked as long as his semen was up to scratch.

He said the interest in semen testing had changed over the years.

"Twenty years ago, bulls were often only semen tested if the cows hadn't got in calf," he said. "It was reactive, not proactive."

Mr Moreland, whose business carries out collecting and freezing semen, pregnancy testing as well as about 30,000 artificial inseminations a year, said earlier in his career, it was mostly studs who semen tested.

"But people are proactive now. It should be done before the sale, and after they are sold. Commercial producers should semen test their bulls every year," he said.

And it is starting to catch on - of the 5000 to 6000 bulls he tests a year, he reckons about a third of them are in commercial enterprises.

Mr Moreland, who tests in NSW, South Australia, Victoria, Tasmania and even King and Kangaroo islands, said he tests 360 bulls in commercial enterprises on King Island alone in May.

But if a bull can't serve cows, it doesn't matter how good his semen is.

"Statistically, only one per cent of bulls are infertile," he said.

"So it is important to do a service capability test and look at him structurally."

As an accredited structural assessor, he prefers to give a bull three ticks of approval - a semen test, a capability test and a testicle palpation.

"To me, it is very important to test if the bull can mount," he said.

"You need to watch and check he can do it, and yet so many people don't."

He said checking a bull over structurally was crucial.

"You need to inspect the legs, testicles and penis, especially in older bulls. Their penises are very delicate organs," he said.

He said warts were another extensive problem in bulls, and sometimes weren't picked up because bulls don't serve prior to sale day.

"Warts can be very big things. I've seen ones that are the size of a grapefruit at the end of the penis," he said.

"There's often more issues with damage to the feet, legs, penis and testicles than the semen."

Making sure bulls can do their job properly is a priority for South Australian producer Craig Swan.

Mr Swan, Sheoak Lodge, Meningie, knows having his bulls tested is well worth his while.

"I feel it is good farm management practice," he said.

"It's so that we know when we start the breeding season that we've got fit, capable, active bulls. It's locked into our program.

Mr Swan has about 30 bulls tested each year by Mr Moreland, who also does a structural assessment on each bull. He also assists in their AI program.

"There is no second chances with our cows, so I'd hate to sell a cow because of a bull issue," he said.

"Bulls are so accident prone. They've got an old fella with 1000 kilograms behind it, and they fight in the off-season."

Mr Swan said it was important to have someone testing their bulls who was trustworthy and thorough.

"I value Ian so much, he's so conscientious in what he does," he said.

"The only problem with Ian is that he barracks for Hawthorn."