Sea containers from at-risk countries to be fumigated 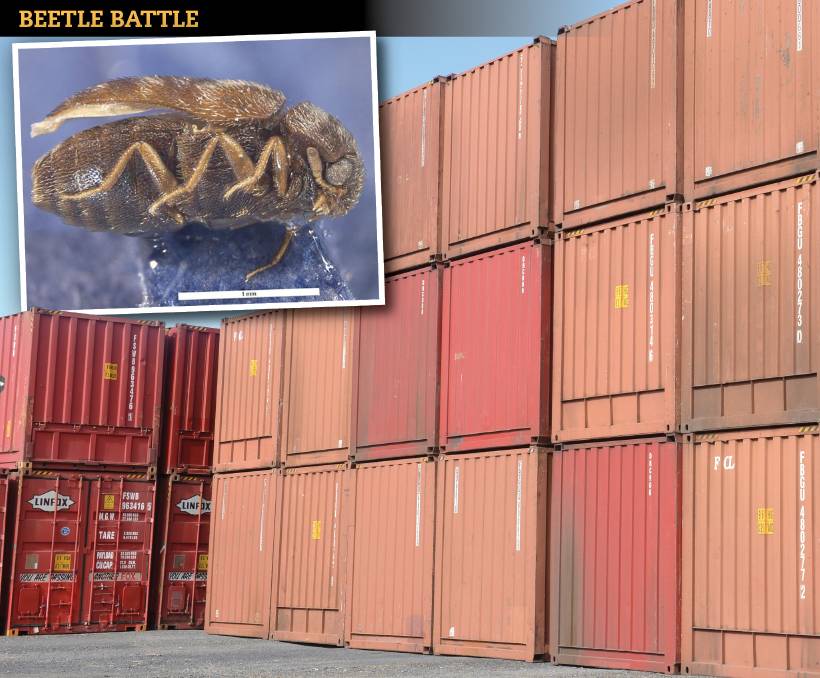 It's a race against time to stop the entry of the grain-eating Khapra beetle into Australia with new fumigation rules for sea containers heading to grain areas of Australia.

The next big step in prevention of the entry of the Khapra beetle started this week with compulsory fumigating of shipping containers overseas heading to rural grain growing areas in Australia.

The rounded beetle that leaves hairy larvae shells represents a huge threat to the grain industry and is now prevalent in more than 30 countries Australia trades with including India, Pakistan, Greece and many Middle Eastern countries.

It is estimated 80 per cent of Australia's grain exports would be at risk if Khapra beetle established in Australia or even "if there was the perception that it had".

"Dried food exports, such as nuts and dried fruit would also be at risk. A widespread incursion could cost Australia $15.5 billion over 20 years," a spokesperson for the Department of Agriculture, Water and the Environment said.

Containers with plant material or that are destined to be opened in designated Australian grain areas will be fumigated with approved chemicals on site 21 days before export to Australia, to kill the beetles in crevices or cracks. If the containers arrive without certification of fumigation they will be turned around. Department approved treatment options include methyl bromide fumigation, heat treatment or insecticide spray.

There have been previous incursions of the beetle into Australia including inside refrigerators and baby chairs, sparking an urgent biosecurity response.

Meantime, industrial action on the waterfront has escalated with the Port Botany dispute beteen Patrick and the Maritime Union of Australia (MUA) dragging on and now breaking out at three other Patrick terminals in Australia. Patrick said that "As the COVID-19 situation begins to impact our country again, the union seems intent on causing disruption for Australia's exporters and importers ultimately impacting households across the country".

Shipping issues have also hit drought-hit South America where rivers have dried up so much that farmers can't get their corn and soy harvests to market on barges, especially in Brazil, Argentina and Paraguay - sending up world prices. Shipping delays caused after a container ship blocked the Suez Canal, are still being felt.