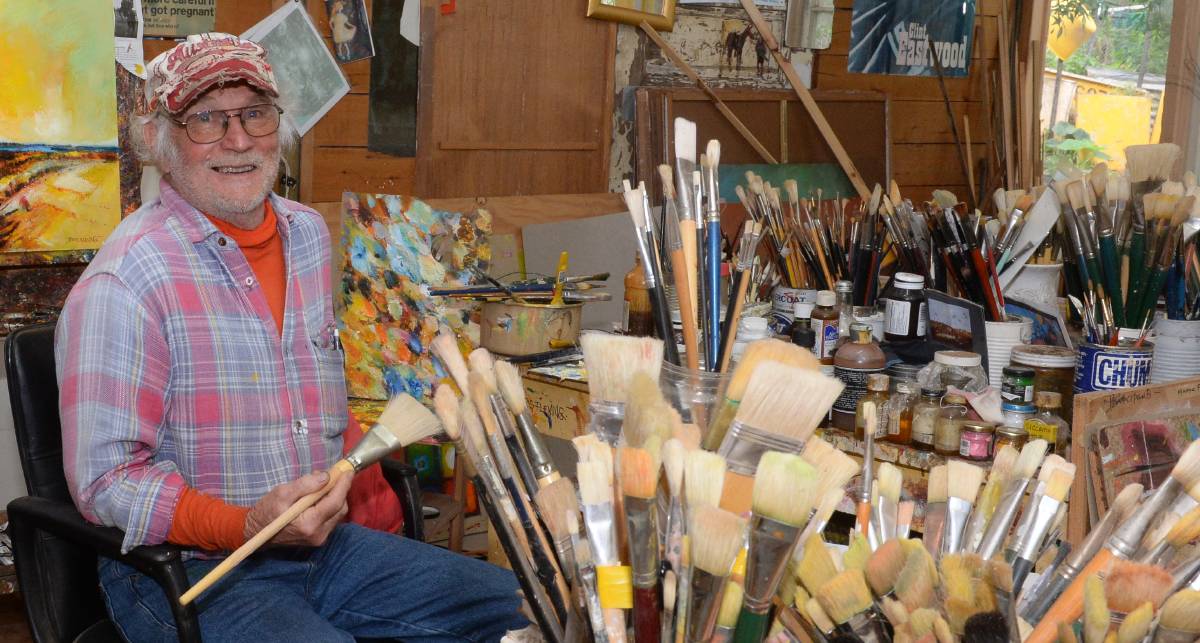 For most of his younger life Eris Fleming was discouraged from art. His teachers even suggested looking at art was occasioning sin.

NOW a renowned artist, Eris Fleming has developed a unique style which he admits doesn't fit any group or categories.

Although he has always been fascinated with Vincent van Gogh's use of colour.

For Eris, his art was definitely self-taught.

His wife, Judith, who was a university friend in their early courting years, said he didn't use a lot of colour when he started, "but now people love the colouring in his work".

To visit his gallery at Bakers Swamp, 24 kilometres south of Wellington, you drive well off the beaten track along a windy dirt road through the hills of the Catombal Range to a modest old wooden cottage (100 years old) with gallery on one side and his studio on the other set in a large rambling garden.

This peaceful homely setting gives the visitor an impression of tranquility and a space for a creative mind. But in each piece there are streaks of wildness in his passion for the subject. The Delungra district boy from Killarney, Myall Creek, is the fifth of nine boys and was always interested in art and studied it "as a little kid".

"But when you had eight brothers and at the time, couldn't even buy paints or a paint brush, it wasn't easy," he said.

"Even my mother discouraged me, saying 'don't to that, it's stupid'.

"After that I kept my interests to myself, for years."

As Eris was at the point of moving up from primary school, a door-to-door insurance salesman (as much business was conducted that way in those years) visited as he would read in local newspapers of births and so on, then canvass for business.

"He asked what I wanted to do and dad said I was interested in art," Eris said.

"The salesman suggested sending me to Christian Brothers College Waverley, as he heard they teach art.

"On arrival and as mum walked around the corner from the college, the Brother turned and said, 'forget art, we have never taught it and never will, so forget it'."

On weekends when boys were allowed to visit family or friends, Eris would go to the art gallery, but the Brothers got wind of it and forbid it.

Eris said to be fair to the Waverley college, they have a tremendous art set up now.

It wasn't until his Sydney University years studying medicine that his interest came out.

Judith (from Hargraves) reflected that she wasn't aware of his interest in art until a year into their marriage.

After graduating medicine Eris's art blossomed while in general practice working at Albury, Grafton and Bathurst.

While in Bathurst his paintings met with success selling through the Hesley Gallery.

Prior to moving to Wellington Eris did a lot of relieving work for doctors in the Riverina when they took leave for holidays.

It was from those times Eris, in recent years, has begun writing short stories from his experiences, and these are getting close to being published.

"Some really crazy things happened in the Riverina during those years of the 1970s," he said.

And it is from these experiences that have been the background to his stories.

Back in those days he would see up to 98 patients a day in 40-plus degree heat. No air-conditioning in those days.

However, he said the job was a dream compared to what I had been doing and allowed him to sketch scenes all around the west.

At University as it was so competitive, Eris spent most of his spare time studying to pass his exams in each of the five years.

Then as a doctor in hospitals, the hours were just as mad, so it wasn't until he started relieving that time began to be his own.

"They were dreadful to me and I hated those concepts," he said.

But he was more intrigued with Dobell and Drysdale.

"I studied all the techniques of applying paint. Van Gogh used a lot of different mediums like beeswax and Dobell used copal varnish, but it's illegal now and you can't buy it," he said.

"Drysdale used what was called boiled oil (linseed) which gave different qualities which he loved as he could move the paint around."

He said he spent hours and hours working out which mediums he liked using - "and there's hundreds of them".

"People ask if I belong to a particular school," he said.

"Everyone likes to be labelled and people love to label, but I do my own thing.

"There are people who paint outback scenes, but I like to paint eccentricities and that kind of stuff."

From all of Eris' medical experiences, it's only time before his short stories are published, and he has heaps of them.

In the meantime, a visit to his Bakers Swamp gallery and a memorable conversation is promised.