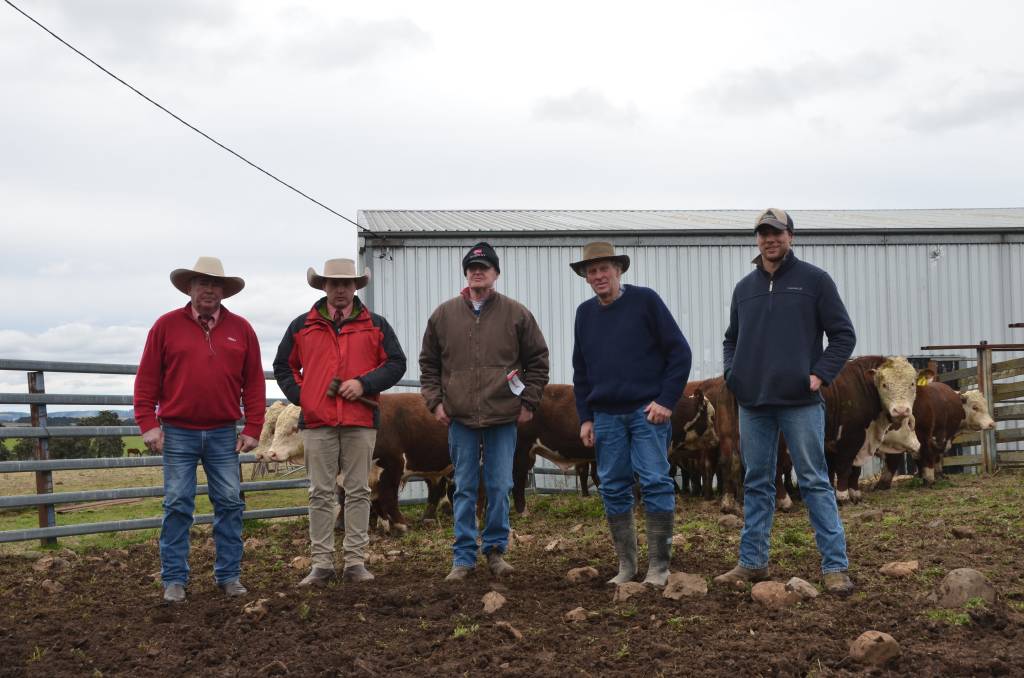 Icy winds, freezing temperatures and snow predicted in the next 24 hours meant steaks and hot cups of tea where in huge demand at the Tummel Herefords on property sale at Walcha on Tuesday.

The auction returned to Walcha after selling at Glen Innes last year and a new auctioneer also took to the rostrum at Tummel for the first time with Elders Linclon Mckinlay selling 22 bulls of the 27 offered for a top price of $10,000 and average of $6071.

A large crowd gathered and the stands where full around the sale ring however the sale was underpinned by a huge local buying presence with 90% of the bulls headed to local Walcha buyers which is a testament to the Tummel program. Mr Lockyear said the bulls eye appeal, hereford cosmetics, thickness and depth of body drew them to the bull.

" We are long term Tummel clients and the cattle perform exceptionally well for us," he said.

He will be joined to the families 600 head herd.

They also purchased another Tummel Prophet Q074 for $7000. Buyers inspect the bulls on offer at Tummel

Tummel Target Q007 by Mawarra Target was above average in estimated breeding values for carcase traits, and growth weights.

The bulls will be joined to a portion of 200 Angus cows.

" The bulls bought today showed good frame, structural soundness and we know the wonderful job these bloodlines do," he said. Tummel bulls go under the hammer

Two bulls was the magic number with DJ and CL Marchant, Orleans, Walcha also purchasing two for a $5500 average.

Vendor Chris Lisle was happy with the result considering the horrendous drought conditions the bulls were reared in during 2019.

The sale was conducted by Elders Walcha.