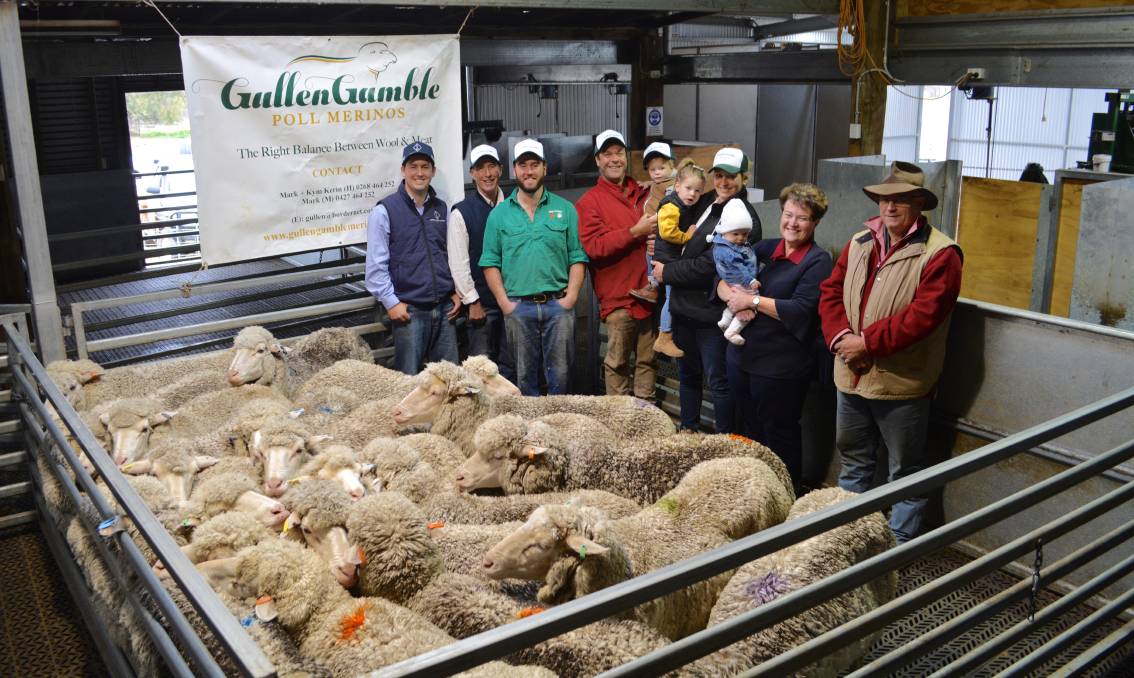 The Edwards family, Wellington and the Kerin family, Yeoval with Elders agent Scott Thrift, Dubbo. Mark Kerin was unable to attend the delivery of ewes to the Edwards due to being in lockdown on the Central Coast because of COVID-19 restrictions.

Previously listed to be sold in lot offerings in a ewe dispersal sale on July 21, last week it was announced the GullenGamble Poll Merino stud offering was sold privately as a whole entity.

AFTER 23 years of breeding the right balance between wool and meat, the Kerin family of GullenGamble Poll Merinos, Yeoval will hand over its stud to new owners the Edwards family in the coming months.

Previously listed to be sold in lot offerings in a ewe dispersal sale on July 21, last week it was announced the GullenGamble Poll Merino stud offering was sold privately as a whole entity.

It was purchased by third generation commercial sheep producer Stewart Edwards and his sons Max and Hugh, who currently run around 4000 Merino ewes of predominately GullenGamble blood across a number of properties in the Wellington region that total around 2023 hectares.

The Edwards have a self-replacing operation with a recent scanning percentage of 157 per cent. They target a 19.5 micron and aim to finish wethers into the prime lamb market with two shearings.

"The GullenGamble stud has been a cornerstone in our flock for a number of years, consistently providing us with even and well-balanced ewes that produce quality wool and fast growing lambs," Max Edwards said.

"We hadn't thought about running a stud before, but agreed it would be a shame to see all of Mark and his family's work go out the gate in lots of 30s and 40s.

"The opportunity to step into leading genetics is something you can't just walk past, and we are excited to see the line continue and be able to keep supplying high quality rams and genetics for modern Merino producers into the future.

"We look forward to taking on the stud with Mark's guidance and continuing support. We are confident in his extensive knowledge and experience breeding top quality, high performing rams while using genomics and ASBVs."

Earlier this year, Mark and Kym decided to retire with their son Nathan (Wal) Kerin and his wife Hannah purchasing the GullenGamble property and Poll Merino stud.

The decision to disperse was made jointly between Wal and Hannah, and Mark and Kym, who are so pleased that the GullenGamble Poll Merino stud has been bought as a whole and will not be dispersed.

"We would like to acknowledge the input the late Dr Jim Watts had in the stud for many years... thanks to Jim's system we have not mulesed at GullenGamble for more than a decade," they said.

"Thank you to Scott Thrift of Elders for his hard work and involvement in the sale of the stud and handover."

"This will give the stud and importantly its clients the predictability of ram type and the continuity of being able to source rams with 'the right balance'," the Kerins said.

Passionate about the Merino industry, Wal and Hannah, and their young family that includes Stella, 3, Ted, 20 months and Tilly, 7 months, will continue to run a large mixed farming operation with a strong focus on the commercial flock.

"As young farmers ourselves, it is great to see another young farmer in Max willing to step outside the square and take on an opportunity and new business venture in the GullenGamble stud," the Kerins said.