The decision not to kill off all of the zombie PELs has outraged some landholders.

EXPIRED gas extraction licences which covered the state have been reduced by 77 per cent as part of the NSW Government's Future of Gas statement, but large swathes of prime agricultural land remain under threat.

Released on Wednesday, the statement, which was announced by Deputy Premier John Barilaro has extinguished the majority of the expired petroleum exploration licences (PELs) with the exception of those that would support Santos' Narrabri Gas Project, which was approved last September.

Areas across the Far West including near Wilcannia and Broken Hill will have all of the zombie PELs covering the area cancelled, while the zombie PELs that sit on a vast area of the state's North West and Liverpool Plains areas remain intact.

Read more from our slay the zombie PELs campaign:

In an effort to cement certainty in landholders minds, Mr Barilaro said the government would "amend the Mining State Environmental Planning Policy to reflect these changes".

"Supporting gas production in and around the Narrabri region and investment in gas-related infrastructure will help to create thousands of jobs, strengthen local economies and drive the state's recovery from COVID-19," Mr Barilaro said.

"We have heard the concerns and questions from our regional communities around PELs and I can confirm today we are reducing the area of land available for gas exploration by 77 per cent.

"The active PELs that remain will be to support the long-term future of the Narrabri Gas Project.

"When we came to office in 2011, petroleum exploration titles or applications covered 45 per cent of NSW - under our Future of Gas Statement, that figure has been reduced to just 1.5 per cent of the state." 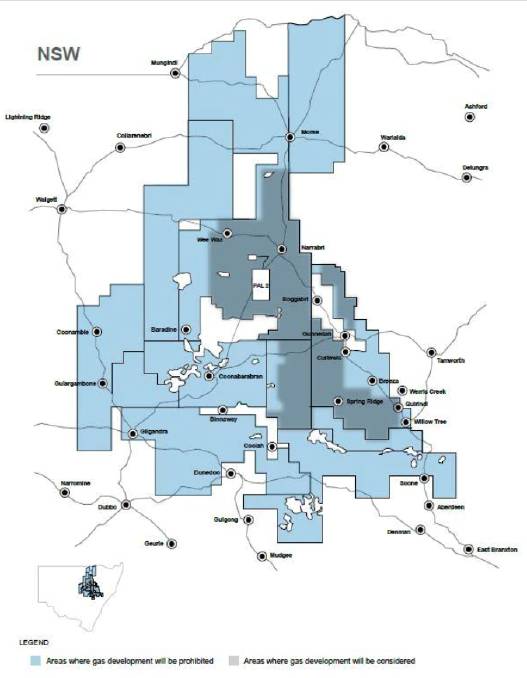 The light blue areas are the zombie PEL that have been canned, while the darker areas remain intact.

However, the NSW Nationals leader's announcement has been condemned by Mullaley landholder Margaret Fleck, whose property sits within one of the PELs that is expected to support the project.

For more than a decade farmers across North West NSW have been ploughing time and money into defending farms and the region's water and land resources from the threat of the industrial gasfields.

"With this gas strategy, John Barilaro has condemned our communities to having to keep on fighting, not just for ourselves, but to safeguard water, soils and the social fabric of rural communities for the next generation," Ms Fleck said.

"The gas strategy is backing not one but two coal seam gas pipelines, that are fiercely opposed by landholders across hundreds of kilometres of farmland and erodible, fertile soils. We will not lie down and let this industry spread through our districts.

"Future generations of farmers will have to contend with the effects of the climate crisis, which will be worsened by continued expansion of the damaging coal seam gas industry."

NSW Agriculture Minister and Northern Tablelands MP said the announcement was a "red-letter day" for landholders in his electorate as the zombie PELs that covered much of the region were extinguished.

"It delivers the outcome the community wanted and provides the certainty for the future we've all long been seeking," Mr Marshall said.

"This decision by the government removes the areas of both PELs which have been laying across the Moree Plains Shire for more than 10 years - and removes them for good - meaning there is absolutely no chance of gas exploration or extraction occurring anywhere in the Northern Tablelands, ever.

"While these PELS have largely sat dormant on paper, today's news is a huge relief for many locals and ensures everyone has certainty about their futures."

The announcement comes as new data released from the Climate Council revealed that between the first half of 2020 and the first half of 2021, gas generation fell in every state in Australia, and provided just six per cent of power in the National Electricity Market (NEM), despite virtually no change in electricity demand.

"Why are we investing in gas-fired power stations when the need for gas in our electricity system is clearly disappearing?"