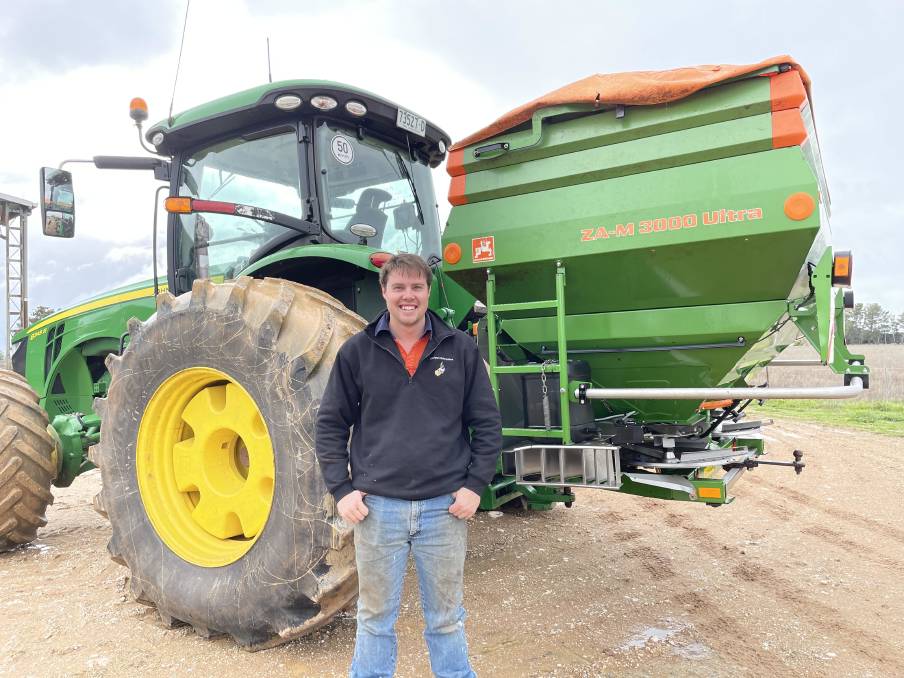 Grower Broden Holland, Koolpari, Young has worked out a simple method to convert their crop protein maps into urea applications - the result has been decreasing variance in their yields and protein percentages, whilst increasing yields.

Broden Holland is decreasing variance in his yields and protein percentages, while increasing yields.

Farmers have plenty of data at their fingertips these days, yield maps, protein maps, soil maps - you name it. But the challenge is how to convert that data into meaningful management strategies.

Grower Broden Holland, who farms alongside his parents Chris and Kelly, grandparents Nevin and Marie and two full-time employees at Koolpari, Young, has worked out how to make sense of the data - using protein maps to inform urea application with a simple formula.

The result has been significantly higher and more even yields and protein percentages across their cropping country, which totals around 3800 hectares of their 5000ha property.

"It's been argued that there's a yield gap in Australia, we don't put enough nitrogen out or have high enough proteins to achieve our maximum potential yields, that's what we've tried to address," Mr Holland said.

Fast forward to 2020, and minus a couple of grazing blocks and adding in a couple of blocks they have since bought, their wheat averaged 6.6t/ha (ranging from 6t/ha and 8t/ha) and they recorded an average of protein percentage of 12.2, ranging between 11.8 and 12.5.

Mr Holland acknowledged other factors would have played a part, with many labelling the 2016 season as too wet, but it is the reduction in variance for both protein levels and yield that tells the story.

"Last year you couldn't blend anything because it was so even," he said.

The Hollands do a 10 year rotation, with seven years crop (50/50 split between wheat and canola) and three years pasture, which they use for grazing for their 4500 Merino ewes.

They first started doing precision ag back in 2016, beginning with grid sampling for pH and phosphorus.

Around the same time they got CropScan protein monitor (3000h) in their CASE header.

"We always had a lot of varying protein, before harvest every year we'd run around with a hand held header and work out what protein we had where and we would send it to different silos.

"In 2016 we harvested with the CropScan and then all of a sudden we saw a protein map and thought right we can spread urea on that."

In the past the Hollands had tried to do some sort of variable rates with nitrogen, with normalized difference vegetation index (NDVI) and yield maps, but Mr Holland said it all got too complex.

"Dad and I don't like staring at computers for days on end and to use a yield map or NDVI you really have to validate, or go out and ground truth where your zones are," Mr Holland said.

"But protein is a direct measure of nitrogen so we didn't need layer upon layer of data, we just got a formula and started spreading."

Their formula for cereals is simple - for every per cent increase in protein from the previous year, they reduce their urea application by 30 kilograms.

"Our rough rule of thumb that to get a tonne of wheat you need 100kg of urea so you have to spread that map three times if the variation's 30kg.

"When we started every paddock had a range of six to seven urea rates and now we're back to two or three.

Mr Holland said they were also looking at nitrogen banking - retaining the nitrogen they don't use in the soil.

"Researchers Dr James Hunt (LaTrobe) and Dr John Kirkegaard (CSIRO) are saying we should be lowering our expectations of mineralisation and always getting enough nitrogen in the system to maintain a certain level of nitrogen, instead of mining it to zero.

"Obviously they understand this may not work on all soil types but for us it's a good strategy to fit in with what we're doing.

"In years when you have drought you're not going to use the nitrogen, but if you get years like this, especially two consecutive, the dividends pay."

Mr Holland, who has spoken at GRDC grower forums, said they were also putting out a lot of urea this year because they were starting from such a low base after the big harvest of 2020.

"Our deep-end is now at 60kg of N but we averaged 6t/ha of wheat last year and 2.99t/ha of canola. We put the urea on to target those yields."

Mr Holland works with 36 to 50 metre grids and said he wasn't scared to have a lot of colours on a map.

"At the moment I get the data off the header, put it into AFS or Farmworks, apply the formula, make the map, put it in the cloud and the tractor reads it. "We've just moved from all Trimble to all GreenStar with John Deere because I wanted to be able to access it all on my phone so I can check it as I'm going."

For most farmers Mr Holland said the barrier when it comes to precision ag is data processing.

"It's very easy to collect the data from the header but it's getting from a protein map to a urea map," Mr Holland said.

"There's programs out there but they all cost money and it takes you a week to learn how to use it."

But, he has a clear vision of what the future of precision ag will look like.

"The key will be when we can finish harvesting a paddock, push download on the phone, push create a prescription and there's your prescription for the next year," Mr Holland said.