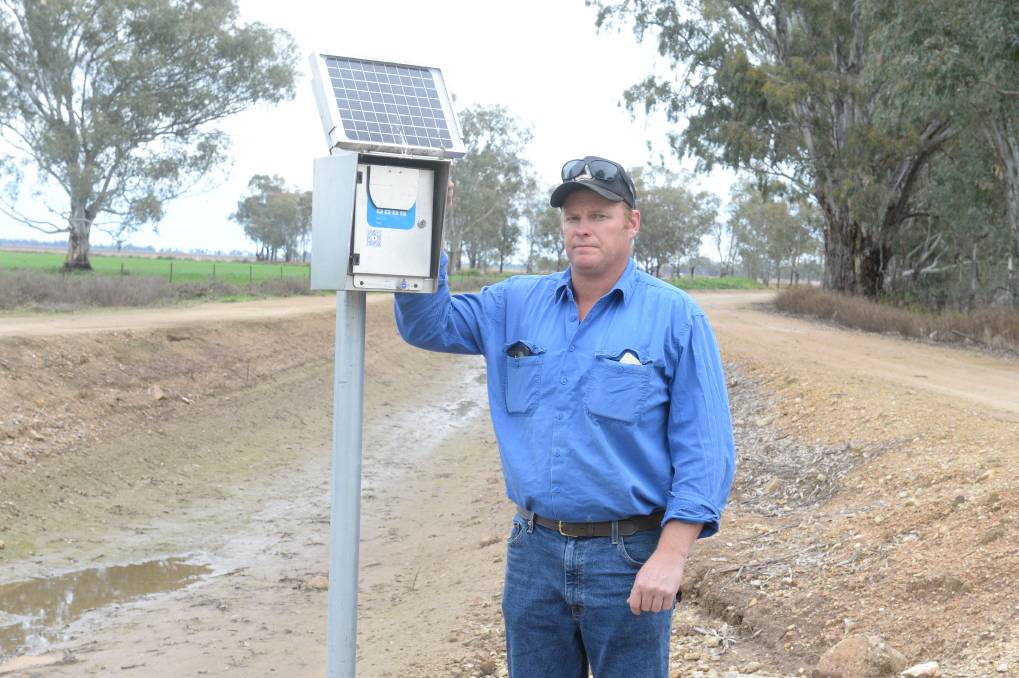 Gin Gin irrigator Stewart Denston said despite his best efforts and a large capital investment, his works could fall into the 45 per cent not installed with a working, compliant meter. Photo: Mark Griggs

NRAR says of the 45pc of works not compliant, only one third have made no effort.

Large irrigators were in the firing line last week with the Natural Resources Access Regulator (NRAR) announcing they were taking enforcement action after statewide inspections found 45 per cent of inspected pumps were still not fitted with compliant meters.

However, irrigators argue NRAR's statement was misleading given some works fell into that category due to factors outside their control - such as back-log in the supply and installation of government-approved meters and telemetry equipment.

In response to questions from The Land an NRAR spokesperson said of the 45pc of pumps which did not have the new meters installed, only about one-third had made no reasonable attempt to comply - 14pc of the total works affected.

"Only those water users who had not made a reasonable effort to comply by 1 December 2020 are likely to face severe enforcement action," the spokesperson said.

NSW Irrigators' chief executive officer Claire Miller said it was not acceptable that any number of people had made no effort.

"These people are bringing the industry into disrepute and should have the book thrown at them," Ms Miller said.

The issue here is upgrading those meters to a gold standard the market is struggling to supply - Claire Miller, NSW Irrigators

However, she said the large majority were compliant or on their way to compliance and it was important to note that NSW irrigators were already metered.

"The issue here is upgrading those meters to a gold standard the market is struggling to supply.

"These are not off-the-shelf devices, and irrigators are waiting up to 10 months for ordered meters to arrive.

"Then, there's only about 100 independent, duly qualified persons (DQPs) active in the market to install and validate the meters. But installation has been fraught with technical bugbears and validation fraught with delays.

A spokesperson from the Department of Planning, Industry and Environment said they understood that, on average, lead times are around 12 weeks for the supply of metering equipment, while as of July there were 162 duly qualified persons in NSW.

The NSW metering reform is being rolled-out in stages over five years. The first category of works required to be compliant, with a deadline of December 2020, were meters on pumps larger than 500mm.

In northern inland NSW meters on pumps smaller than 500mm must be compliant with the new standards by December 2021, which will include another 3200 irrigators.

"So now the manufacturers are even more swamped, but even if all the meters arrived tomorrow, they need to be installed at a rate of 88 meters per work day to make the December 1 deadline," Ms Miller said.

The staggered deadlines were pushed back by a year in 2019, the Department of Industry admitting it would have been impossible for many irrigators to meet the original deadline given the testing of telemetry technology was delayed and drought meant many new meters were unable to be tested.

"Water community should be concerned" - NRAR

An NRAR spokesperson said although they understood there may have been some challenges in getting connected to the data acquisition service (DAS) (which includes telemetry equipment), "there were limited excuses for water users not to have had an accurate meter installed by the time we visited their properties, months after the deadline of 1 December 2020."

"The water users who were required to comply with the new metering regulations by 1 December 2020 have the largest pumps...with the largest capacity to take water across the state.

"At the time of inspection, water taken through 45pc of the pumps was not being measured to the standard required by law and that is something that the entire water community should be concerned about."

The spokesperson said they had in their compliance reporting they had categorised works as 'fully compliant' (23pc), 'well on the pathway to compliance' (32pc) and 'non-compliant' (45pc).

However, the 'non-compliant' category included both irrigators who could show they ordered meters before the deadline, as well as the 14pc who had done nothing to become compliant at the time of inspection.

What more can we do?

Gin Gin irrigator and Macquarie River Food and Fibre vice chairman Stewart Denston said despite his best efforts and a large capital investment, his works could fall into the 45pc not installed with a working, compliant meter.

He explained that they had experienced an engineering problem with their new meter and were therefore currently using their previous approved meter. His supplier was also unable to provide telemetry equipment as yet.

"It's extremely misleading and unfair to have us there (in the non-compliant category) when we've done everything we've been asked to do, ordering and installing the meter on time," Mr Denston said.

He said NRAR have conducted site visits and have indicated they are happy with their compliance progress.

"We've been metered for decades and are used to having regulations forced upon us, we can adapt and work with that, but it's very difficult to work with a process which is rushed into play," Mr Denston said.

"It's not their responsibility to protect the irrigation industry's reputation, but they do have a responsibility to ensure the information they release is an accurate reflection of the on-the-ground work being put in by individuals to meet what is a very difficult policy to implement, and that it is much broader and more complex than three binary categories," Mr Drum said.

"Similarly, NRAR are in a difficult position as the policy as the roll-out was not fully thought through and highlights a disconnect between the policy makers targets and the industry's ability to meet them in a market which can't keep up.

"Bit rich to be arguing over statistics" - Justin Field

Following last week's statement by NRAR, independent MP Justin Field had called for no pump notices be issued for those who were not yet compliant.

"It's now almost seven months since the deadline passed. I think it's a bit rich to be arguing over the statistics when it is clear many big corporate irrigators haven't made getting compliant a priority but have been taking billions of litres of water," Mr Field said.

"It is those people bringing the industry into disrepute, not the way the regulator has presented the compliance statistics."