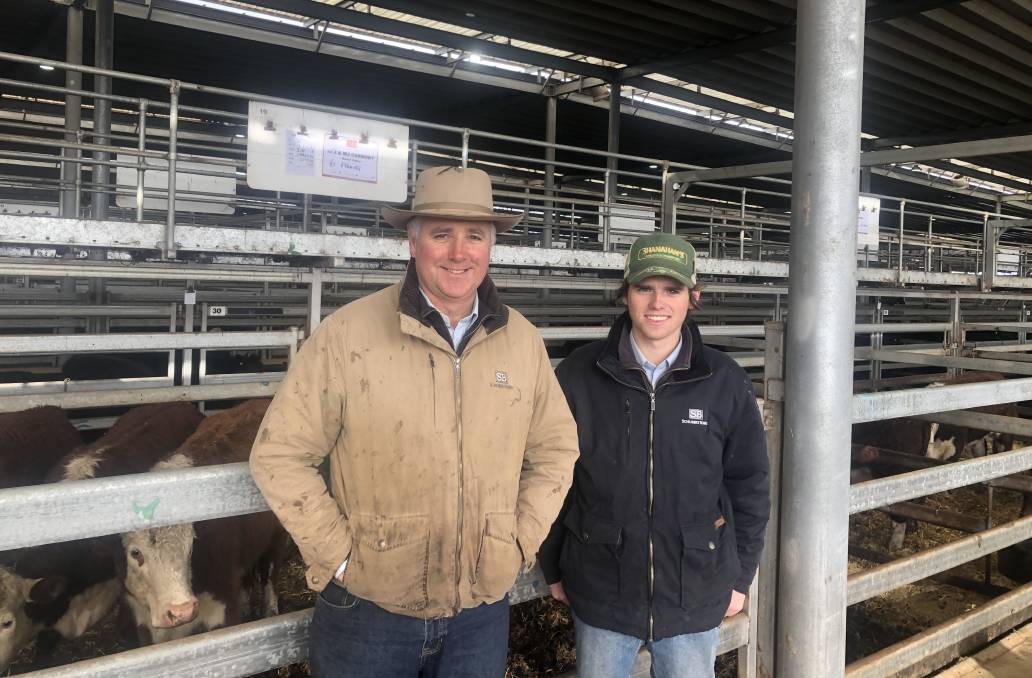 Craig and Harry Schubert, Schubert Boers with a pen of six Hereford steers, 461kg, from J and WJ Carmody, which sold for $2100. Photo: NVLX

The market stepped up once again at the Wodonga store sale on Thursday, with a smaller yarding of close to 1000 head of cattle making up to $2340 for steers.

"It's every bit as strong (as the last store sale) and was showing a dearer trend among most categories, every sale you go to now is setting new benchmarks," Mr Schubert said.

"It was a pretty handy yarding (quality wise) for this time of year.

"I don't think you could say one category was a stand out, I think it's just across the board general buoyancy in the market at the moment, very, very solid."

There were only two pens of cows and calves which sold to a top pf $2800 and just four pens of pregnancy-tested-in-calf heifers, which sold for a top of $2425.

"You're not seeing any numbers of cows and calves or joined cows coming forward, that's been a trend for a while," Mr Schubert said.

Mr Schubert said the wet season was impacting the motivation of people to bring stock forward and handle cattle. However, he thought the prices would continue to draw them out in the weeks to come.

"Everything's water-logged now and there's more rain to come, it's looking good for the spring time."

It was mostly local competition who operated at the sale, along with the usual commission buyers.

The sale was conducted by independent Albury and Wodonga based agents BUR, Corcoran Parker, Schubert Boers and Peter Ruaro Livestock.