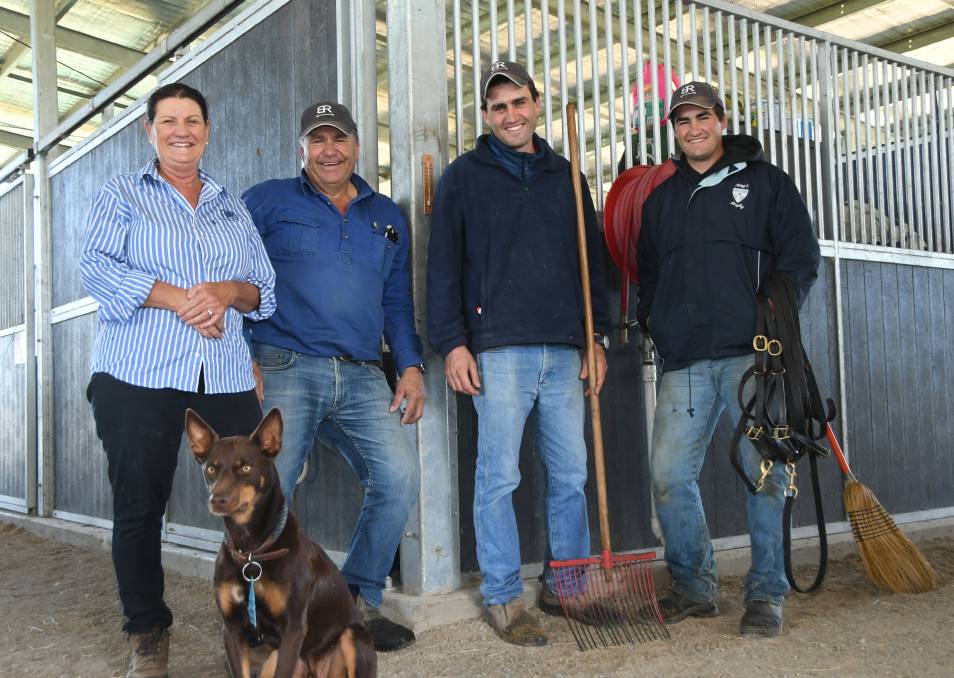 The Bell River Thoroughbreds team of Georgie and Andrew Ferguson, with sons James and Jock and supervisor dog Leo at the stables on the Dungog district property. Photo Virginia Harvey.

VICTORY by Volcanic Rock in the BRC The Phoenix-LR on the recent Oaks program at Eagle Farm became a pivotal win for the Ferguson family, owner-managers of Bell River Thoroughbreds a long standing breeding operation which originated in the Central Districts before relocating to the Dungog region three years ago.

Bred in partnership, Volcanic Rock became the first stakes winner bred, raised and sold (for $240,000 at Inglis' Classic Yearling Sale) via Bell River at its new digs at Glen William.

Another Hinchinbrook colt that was also offered at that sale to have raced is Baranof, which finished second in this year's $2 million Inglis Millennium.

"Volcanic Rock and Baranof are two of only eight yearlings we offered at the Classic last year," Andrew Ferguson said. 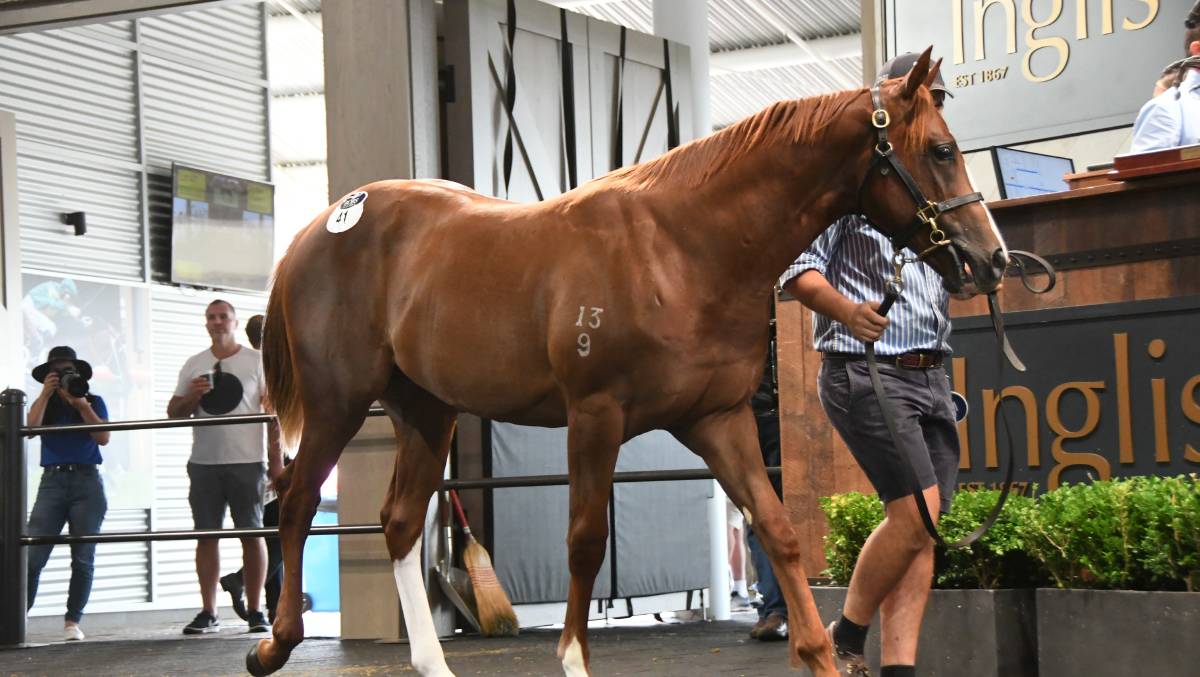 An Invader colt from Hussidora, which the Fergusons sold for $375,000 at this year's Inglis Classic Yearling Sale at Warwick Farm. Photo Virginia Harvey.

That sale launched a new era for Bell River Thoroughbreds, its principals Georgie and Andrew Ferguson - along with added energies from sons James 24 and Jock 22, are re-building their business.

"When we left Wellington, we were burnt out; we could not get staff and we lost our farrier and vet, and it was a long drive doing (mare) walk-ons," Georgie said.

While dispersing the horses in 2016, Thoroughbreds was still Georgie and Andrew's passion.

Then more success followed including talented gallopers Ace High, Faraway Town and Denmagic, and combined with encouragement from James and Jock, the Bell River brand is again operating. 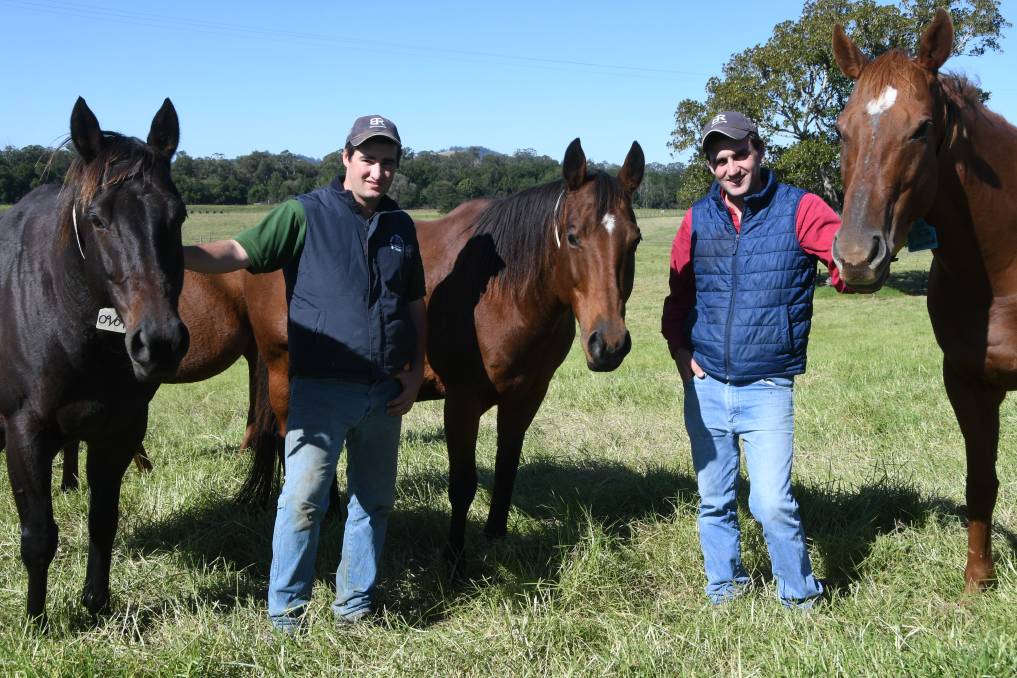 Brothers Jock and James Ferguson with broodmares Raining Embers, Frilly Curtain and I Am Excited in the paddocks at Bell River Thoroughbreds, Glen William.

Its home-bred star (in partnership) is stallion Extreme Choice, who created a new record for the highest earning Australian first season sire for earnings over $3.3 million from only 48 first crop foals.

The new Glen William River bordered property - which consists of 170 acres and situated on "Old Pine Brush", is now transforming from a cattle property into a functional show-piece for Thoroughbreds.

"We want to do it with the boys (James and Jock); they are driven and passionate about getting our name back to its previous heights."

Georgie said that while James gained industry experience overseas, his brother learnt new skills with a traineeship at the Irish National Stud.

"Both have had extensive hands-on work with young horses, and were leading yearlings from 14-year-olds."

James said they are looking toward having 60 in-foal broodmares.

"Ideally we would like to be open to some new clients, but that will be at a later date," James said.

No doubt about it

This season the breeders intend to further use the Not A Single Doubt sireline.

"About 25% of our broodmare herd are going to Not A Single Doubt line stallions; Anders, Farnan and Extreme Choice, and we believe that our families have had a lot of success with that sireline - it's one of the most dominant genetic sirelines in the Australian Stud Book."

James said it is a commercial decision.

"But it is a sireline that you know what you are going to get as far as type and their attitudes, it is such a strong genetic line, and we believe that he will be the number one sireline from Danehill that will kick on from here."

A foundation matron for the Dungog farm is Heat Of The Fire, dam of its latest stakes winner Volcanic Rock.

"We cannot afford to go out and buy half-million-dollar mares, for us we are always looking for value," Georgie said.

James and Jock acknowledge their parents.

"We are in a lucky position that Mum and Dad want to get back into it (industry) and to have their support, and that hard work will get us results," James said.

"So, it is step by step at the minute, and to keep working hard."

James said that they expect to take three years to "tweek" their management skills at the new farm and to learn what works best in the environment.