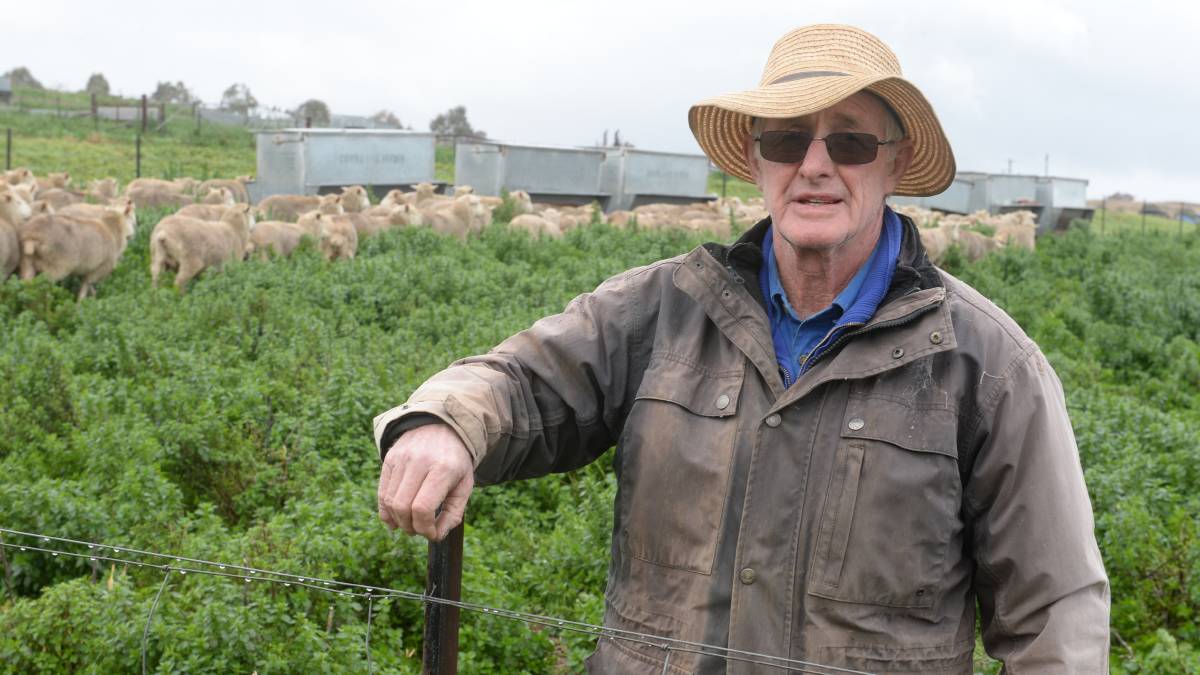 Tong Grant is only feeding some crossbred ewes and lambs at present in his 4500-head feedlot at Riverside, Canowindra.

Extraordinary weight gains of lambs are the normal from a Western Australian manufactured feed pellet.

Tony with his wife, Sarah, have run a 4500-head lamb feedlot on their Canowindra property, Riverside, for the past 34 years and they put their success down to clean water and good feed as the two important ingredients for success.

"Water has to be clean and feed rations have to be consistent," he said.

This really came to the fore during the drought years of 2019/20.

"If you don't have clean water you will not get good results, it doesn't matter how much you spend on securing quality stock and top feed."

In the years prior to that drought, the Grants had developed their own "total mix ration" based on wheat and home-grown lucerne pasture hay which returned good growth weights among the many lamb intakes.

However, supply and quality became harder and harder during the drought, to the extent where the Grants had to look elsewhere, even interstate for roughage to supplement their own home mix.

During an earlier world tour from a Churchill Scholarship, Mr Grant returned home via the Middle East where he noticed boat sheep were fed pelleted feed.

"They were magnificent sheep and all fed on pellets," Mr Grant said.

After doing the sums on returning home, he decided it was too hard and uneconomical to pelletise his own feed.

However, the drought set in and he heard from a grain merchant friend, Geoff Brown, Bio-Oz, Parkes, the availability of LambGro pellets Mr Brown was shipping over from Milne Agri Group, Perth, Western Australia.

Mr Brown was organising containers on rail backloads from the west during the drought.

"Rail freight from the west was relatively cheap and this helped desperate farmers during the prolonged drought," Mr Brown said.

The Grants ordered 40 tonnes of pellets for delivery every five or six days transported to Riverside at $160 a tonne freight cost.

"Cost and freight together worked out at $25/t less than what I could make my total mix ration at the time, so the project worked well," Mr Grant said.

"But what we didn't expect was the exceptional growth rates from the pellets."

The Grants were putting through some 20,000 lambs a year at the time.

"I got a consignment of first-cross mixed-sex lambs from Coonamble in December, 2019 and split them into two groups," he said.

"Group A weighed an average 29 kilograms and Group B 22.5kg on arrival.

"We gave them the pellets and after eight weeks they were sold. The ewes weighed an average 46kg and the wethers 48kg."

Mr Grant said his diary notes at the time stated the lambs were very light when they arrived, but were introduced to the pellets under extreme and trying conditions, but did well.

"I didn't lose one lamb and we didn't have one non-feeder."

In another intake a week later they introduced second-cross lambs which gained an average 385 grams/day.

Tottenham grazier, Greg Broughton, Jamea, has moved out of stock to concentrate on cropping at present, but also used the LambGro pellets during the drought.

"We were feeding a lot of lambs back then and always had induction issues," Mr Broughton said.

"The Milne pellets made me so comfortable that I almost stopped worrying about inducting,

"It is such a safe pellet to use. We didn't have issues and we didn't have losses. We used the pellets with all confidence."

Geoff Brown said the pellets would be a good feed during this cold and wet winter.

"I have Merinos, and like other sheep breeds this winter has had its challenges," he said.

"But feeding lambs or grown sheep with the pellets would help increase body weight and nutrition."