Phil and Brad Thomas, Kylandee Herefords at Inverell with the top priced bull and the best judged sire at the Glen Innes Hereford Show and Sale.

For five years in a row Inverell's Kylandee Herefords have made their mark at the annual Glen Innes Hereford show and sale.

On a raw and wet winter's day at during which the yardmen shivered in their long coats and the bid spotters' fingers shook with every jump in price, red and white sires at the 76th annual Glen Innes Hereford bull sale sold to a top of $26,000 to average $7851 for 37 sold from 52 presented.

The good oil on the day backed Kylandee Quamby Q007 to win and he did not disappoint, making the top money of the sale to go to George and Shirley Hardcastle's McPherson Hereford stud at Old Koreelah. A disappointed Greg Tyler at Hillview Herefords, Tyringham, was the underbidder and followed to $25,000 before backing out.

The 25 month old Quamby, 1045kg, presented with a 142 square centimetre eye muscle area and 42cm scrotal circumference while his Breedplan figures showed +81 for 600 day growth, +5.1 for EMA and +1.7 for retail beef yield.

He was sired by Kylandee Murrumbo, who was voted yardsmens' choice at this sale three years ago.

For the Hardcastle family, this was their third Kylandee bull with their 2017 purchase of Kylandee Jackass responsible for producing three young sires which sold for more than $10,000 to a top of $16,000 at a recent Casino bull sale. 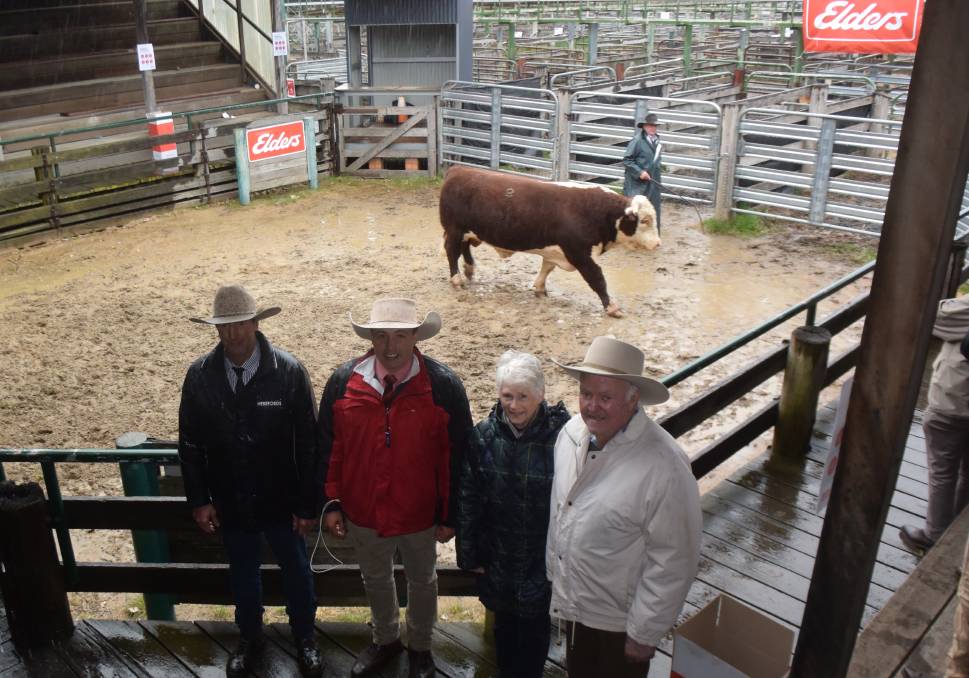 For Phil and Brad Thomas of Kylandee at Elsmore via Inverell, this year's Glen Innes Hereford show results included junior and grand champion bull for Kylandee Quirindi Q015 by Talbalba Line Up, which sold for $10,000 to the Monie family through Elders Inverell.

The win is the fifth in a row for the small stud and sixth overall.

"Consistency is something you aim for. That's our focus," said Brad Thomas. "It's what we love. It's our passion."

The Murrumbo sire progeny continue to excite, winning the pen of three and pen of six at the Glen Innes Hereford show on Thursday.

"For us as breeders Hereford are a very profitable article, delivering great feed conversion showing efficiency with consistency and longevity," he said.

Mr Kneipp also sold Dundee Bonzer by Dundee Bonanza for $6500 to Ben Gould, Greenridge via Casino in his cross-bred operation. His heifers by Courallie Kodiak K592, sold to $2800, through Colin Say and Co.

Ben and Leanne Rumbel of Supple Whiteface, Guyra, sold a pen of five Hereford heifers for $3100.

More details in The Land Champion sire at Glen Innes Kylandee Quirindi made $10,000 going to the Monie family at Inverell.