The Urban family achieved a perfect clearance rate at an average of $10,880 at its annual sale. 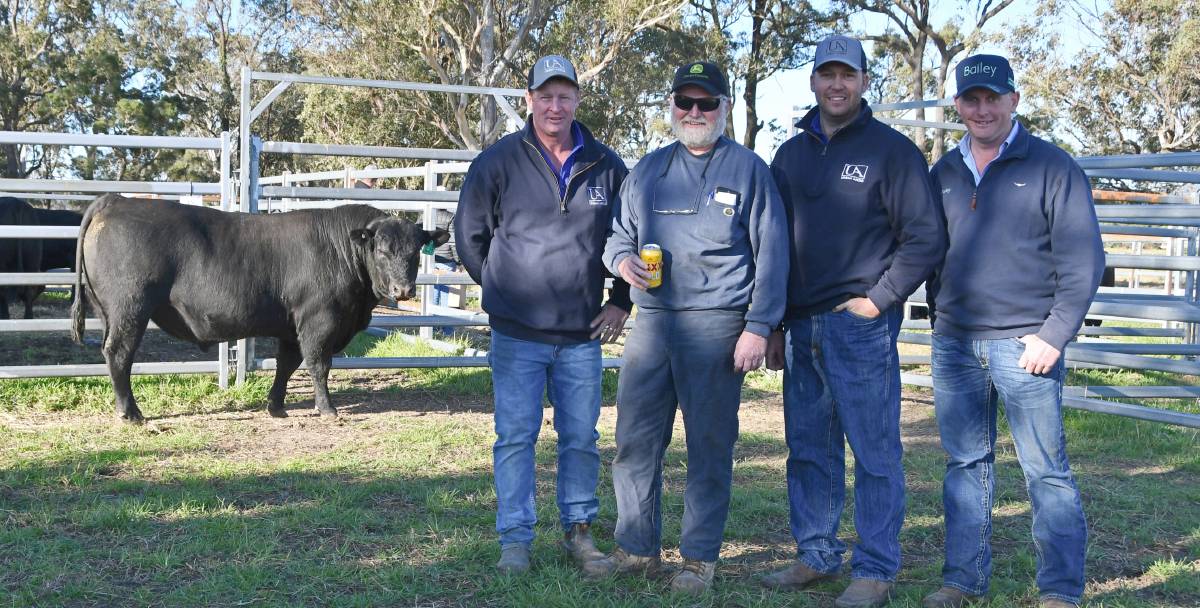 URBAN Angus enjoyed one of its most successful sales on Saturday as 58 registered bidders flocked to the Urban family's property Lyndhurst Park, Wallarobba, near Dungog.

Such was the competition at the sale, the helmsman-style auction lasted almost an hour and a half as bids continued to fly in.

The 24-month-old son of Esslemont Lotto L3 and out of Urban Burnette K37 weighed 758 kilograms, was in the top 20 per cent of the breed for intramuscular fat, eye muscle area and days to calving.

"His low birth weight and good milking figures were what really drew me to him," purchaser Mike Smith said.

"We're planning to put him over some Limousin heifers, we'd normally use a Limousin bull but I wanted to give Angus a try.

"The heifers have already got a lot of good shape and muscle, so I want to try the Angus and see how it goes."

Stud principal Matt Urban echoed Mr Smith's sentiments saying the top-seller had "always been a sire from a calf".

"He's got a good skin and is a beautiful bull," Mr Urban said.

"He's a son of Lotto so he's got that good pedigree behind him and I think he ticks a lot of boxes."

Ray White Rural, Dungog was the busiest buyer on the day, securing five bulls at an average of $9400 on behalf of Santaco Rural, Tamworth.

Meanwhile, Tim Phelan, Kimbarra, Dungog, Mark Veness, Bunyah, and Bailey Property and Livestock, Singleton on behalf of Mooney Pastoral, were the day's other bulk buyers, each buying two bulls at an average of $13,000, $12,500 and $6000 respectively.

Mr Urban said he and his wife Aimee were overwhelmed with the support shown at this year's sale.

"It's crazy to think how well this year's sale compares to last year," Mr Urban said.

"Last year, I think we averaged around $6000 and this year it's nearly double that, which is just fantastic.

"I put it down to the great season we're having and when you see weaners bringing $1700-$1800 you can afford to splash out on a bull a little bit more I think."

As well as the 25 bulls, two runs of five and six pregnancy-tested-in-calf (PTIC) hefiers and two runs of seven and six unjoined heifers were offered at Saturday's sale.

The run of five PTIC heifers topped at $3600 a head to HP Thoroughbreds, Hillside, while the other run sold for $3500/hd to Ron Westley, Barrington.

The run of seven unjoined heifers reached $2500 and was sold to Chris Paull, Lambs Valley, while the run of six sold for $2200 to Matthew and Taneal Anderson, Clarence Town.

"To see people believing in our program is really satisfying," Mr Urban said.

"We're really grateful for the support and want to thank everyone for coming along this year."

The sale was conducted by Ray White Rural, Gloucester.