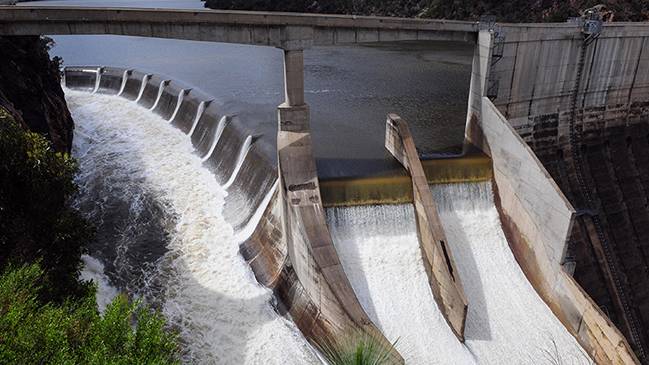 It seems like only yesterday that the state's dam levels were dropping to below 20 per cent capacity with much of the NSW gripped in drought until 2020.

But today several dams in regional NSW are close to full and some, including Burrinjuck and Pindari, have even started to spill.

WaterNSW spokesperson Tony Webber said Burrinjuck experienced a small spill of around 5000 megalitres on Sunday at around 3pm.

WaterNSW has also been releasing up to 8000ML/day from the Murrumbidgee storage to create airspace for further inflows which totalled 26,218ML in the last 24 hours.

"As has been the case for a number of weeks, we've been making airspace releases between rain events to allow downstream tributaries, which have been the vast bulk of the river flow in the Murrumbidgee, to peak and subside," Mr Webber explained.

"We reduced those releases to a minimum for the rain event over the weekend.

"That rain event generated more inflows, which brought the dam to capacity and a minor spill."

There was a minor flood warning for the Tumut River announced by NSW SES on Monday.

In the north of the state, Mr Webber said Pindari Dam, which feeds into the Border Rivers, experienced a spill on Sunday night, while airspace releases of 2000ML/day began on Friday for Keepit Dam, which is currently sitting at 97 per cent full and was receiving inflows of up to 3000ML/day.

It highlights a remarkable recovery for the Namoi storage which reached its lowest level on record in 2018, at just 0.4 per cent of capacity.

WaterNSW Lachlan Valley storage Wyangala Dam has also seen airspace releases commence. The storage, which the NSW government is controversially planning to expand, is expected to fill by October and there is a 30 per cent chance that it will spill by the end of August.

Overall state storages are sitting at 73 per cent full. See below for the storage figures of key regional NSW dams.