Three generations of MacKenzies - Bruce, Jack and Robert with Jack's partner Alexandra Lynch - and their $225,000 record busting Angus Sire Texas Iceman R725, rising 16 months, by Poss Maverick from the Texas Undine dam that before Thursday's sale delivered 12 sons to an average of $26,400.

The top-gun sire in Texas Iceman R725 wrote his name in the record books when the Gloucester-based Macka's Angus made the bold bid of $225,000 to secure the upcoming sire, which will be collected and marketed world-wide in partnership with Genetics Australia.

He surpassed the previous national record of $160,000 set in 2019 for Millah Murrah Paratrooper P15purchased by Cowan family of Arkle Angus, Munglinup, WA, with semen rights secured by ABS Australia.

Iceman R725 caught the eye of many from the get go, being a son of Poss Maverick and a maternal brother to the $108,000 Texas Powerplay P613 that sold to Kelly's Angus, Victoria last year. 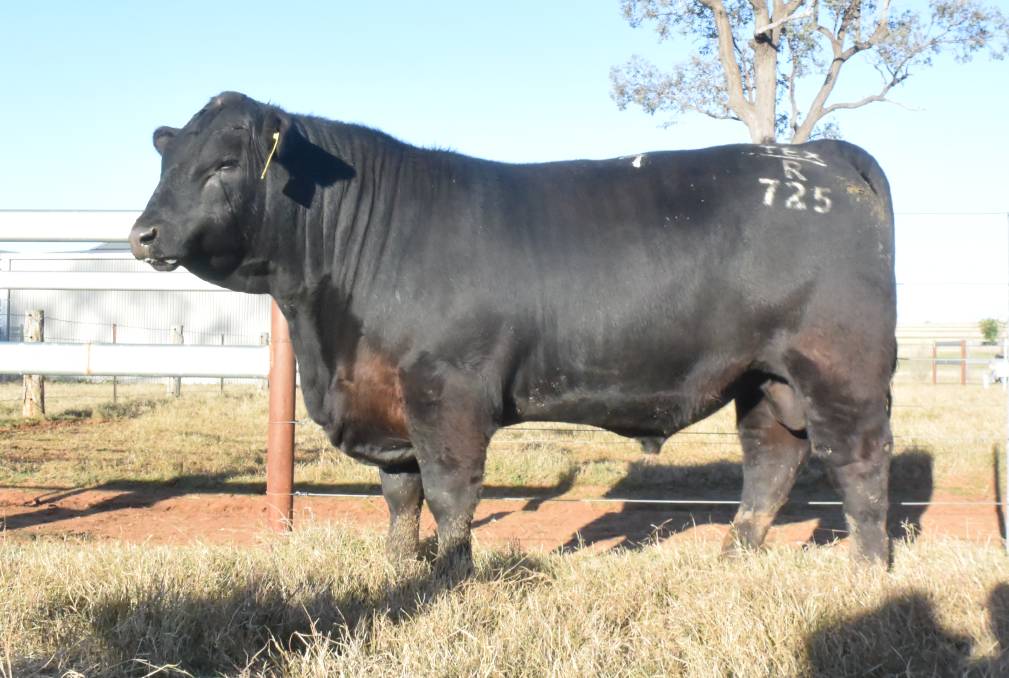 Out of Texas Undine H647, which has delivered 12 sons to average $24,600 with many daughters retained in the stud, he weighed 730 kilograms at 16 months of age with an average daily gain of 1.45 kilograms a day, and presented with 11 estimated breeding values (EBVs) in the top 10 per cent or above of the breed, including top one per cent for 400-day weight, domestic index and heavy grass index.

Macka's principal Robert MacKenzie said the purchase reflected the Undine track record, with her maternal traits highly valued by the fourth generation family company. Iceman's record breaking sire Poss Maverick also sat well with what Macka's intended to achieve, building the next generation of "powerhouse females" with 1000 of their top commercial Angus females at the company's Berrico Station near Gloucester to be artificially inseminated by Iceman this year.

The company, which also bought Texas Beast Mode Q377 for $32,000, runs 3500 commercial breeders along with 150 stud cows and 140 donor cows across 6000 hectares in the lower Hunter and Gloucester districts. It still retains close business ties with China but in light of recent political moves has expanded their reach into the Middle East while the domestic market is currently gobbling up most of the production. A new retail-ready line and home delivery of black Angus beef is in the pipeline. All progeny will be sold under the Angus Verified program which gives confidence to the purchaser.

"We are proud to have been the first to sell under the program recently at the Gloucester saleyards," Mr MacKenzie said.

Robert's son Jack, now in charge of the family stud and overseeing the commercial operation, said Iceman's potential brought "predictable performance thanks to the maternal strength of the Undine pedigree".

"Phenotypically this bull fits into our program. He has structural soundness, length and depth, has a moderate frame and has great carcase attributes. We will market his semen straws all over the world and we will see where this takes us."

A rising two-year-old, he was sired by Karoo Knockout K176 and out of the donor female in Texas Undine L621. Weighing 900kg he sat top 1pc for 200-, 400-, 600-day and mature cow weights, domestic index and heavy grass index, and ranked in the top 10pc or above for multiple other traits.

Also buying from the western state was Monterey Angus, Karridale and Tullibardine Angus, Albany who partnered in the purchase of Texas Handyman Q464 for $28,000.

Texas Korporal Q253 by Texas Berkley from a Texas Toque sold for $54,000 to Michael and Jessica Smith, Woodenbong and will be used to build capacity in their Angus herd, with 400 females to be joined next year across three properties along Tooloom Creek including the recently developed Adrigool.

"A lot of thought went into this purchase," Mr Smith said. The cow line is the most important. This sire is an all-rounder and he will be able to go over our somewhat smaller cows and heifers without much trouble. He shows good growth and average daily weight gain, good milk and is a nice type.

Volume buyers were first time clients Fucheng Woodlands, Woodlands Station at Westmar, Qld which won eight bulls to a top of $28,000 for Texas Korporal Q308 by Texas Berkley from a Texas Undine.

"We are looking to improve early weight gain," said Mr Porter. "Our country is Brigalow and heavy forest. We have fair-sized paddocks and bulls have to do, they must be hardy and be able to get around."

At the conclusion of the sale, Mr Mayne was gobsmacked saying "this is what dreams are made of".

Wendy Mayne said "Maternal lines are what we are all about. It is nice to see that buyers believe in our program."

Mr Mayne added: "We will not buy a bull unless we know its maternal lines. Nature always goes back to the average. If the maternal lines are well above average you know the progeny will go well."

The profits from this week's sale will go towards paying off newly acquired land close to home which will mean the enterprise no longer requires agistment to run its full complement and can continue to turn off record-breaking sires.

Where did Macka's come from?