All 79 bulls offered at the sale near Gloucester were snapped up on Friday. 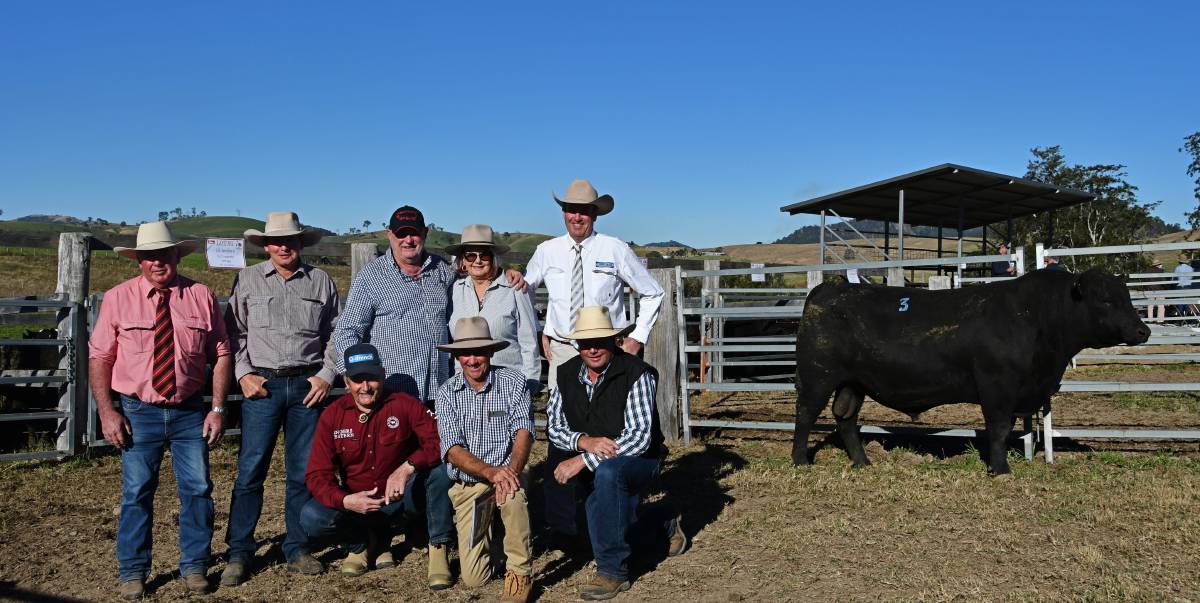 YOU would be forgiven for thinking there was a race meeting near Gloucester on Friday, such was the amount of cars heading to Knowla Livestock's annual sale.

A total of 95 registered bidders flocked to the Laurie family's sale from across the state, while many more followed along online via AuctionsPlus.

The massive crowd did not leave disappointed as all 79 Angus bulls offered on the day were snapped up at an average of $17,255.

Auctioneer Paul Dooley, Tamworth, did not have to wait long to knock down the day's top seller, as lot three, Knowla Quadrunner Q124 sold to Blackjack Pastoral Company, Oswald, for $40,000.

The 23-month-old son of Knowla Monty M186 and out of Knowla Kruger K42 weighed 914 kilograms, was in the top 10 per cent for the breed in scrotal size and in the top 20pc for intramuscular fat and carcase weight.

"I think he is as good a bull as there is here, which is really saying something," Blackjack Pastoral Company manager Dave Walsh told The Land.

"Our immediate plans for him are to put him straight to work on a commercial Angus herd.

"He was one of two we bought, the second bull we bought will be a heifer bull and he will be put to work in about six weeks time, where as this fella will be going with cows."

The 16-month-old son of Yon Full Force C398 and out of Knowla Doris K73 was purchased by Paul Barnet, Mondrook, who said the bull would make up a vital part of his new operation, which had recently switched from dairy cattle.

"I particularly liked the thickness and volume of him because I've got some pretty big stud cows and I think he will be a good fit over them," Mr Barnet said.

"I'm going to flush a few of the cows over the coming weeks, so I think he will get to work in the next six weeks or so.

"I gave up the dairy job 18 months ago and moving into these Angus cattle is the plan moving forward, so we want to start with quality cattle like this and go from there."

However, it was Ellerston Station, Ellerston, which backed up its efforts of buying 15 bulls at last year's sale by taking home another eight this year at an average of $17,750.

"Our average was right around the sale average, which I'm very happy with because the sale was really solid," Ellerston Station manager Rob Teague said.

"They're really good, high-quality bulls and they are going to do a job on our Hereford cows to create a Black Baldy cow, which we need at Ellerston.

"The bulls were really quiet, well presented and I'm looking forward to seeing how they go in the future."

"It is without a doubt one of, if not our best sale," Mr Laurie said.

"I think it is a record average, record top prices for our yearlings and senior bulls, but more importantly for us, a lot of our loyal clients still got bulls they thought they could afford, which is just as important to us as those top prices or a high average.

"The top-seller had a very good balance between his physical appearance and his data, he had both bases covered."

Mr Laurie said the results of Friday's sale were made even more special by sharing it with his entire family.

"It is a family operation, everyone has an input into it, so it's really pleasing when you can have a successful day like this when you live and breathe it like we do," he said.

"We're all just so grateful for everyone's support at this year's sale."

The sale was conducted by Elders, Walcha, with Paul Dooley, Tamworth, auctioneering.