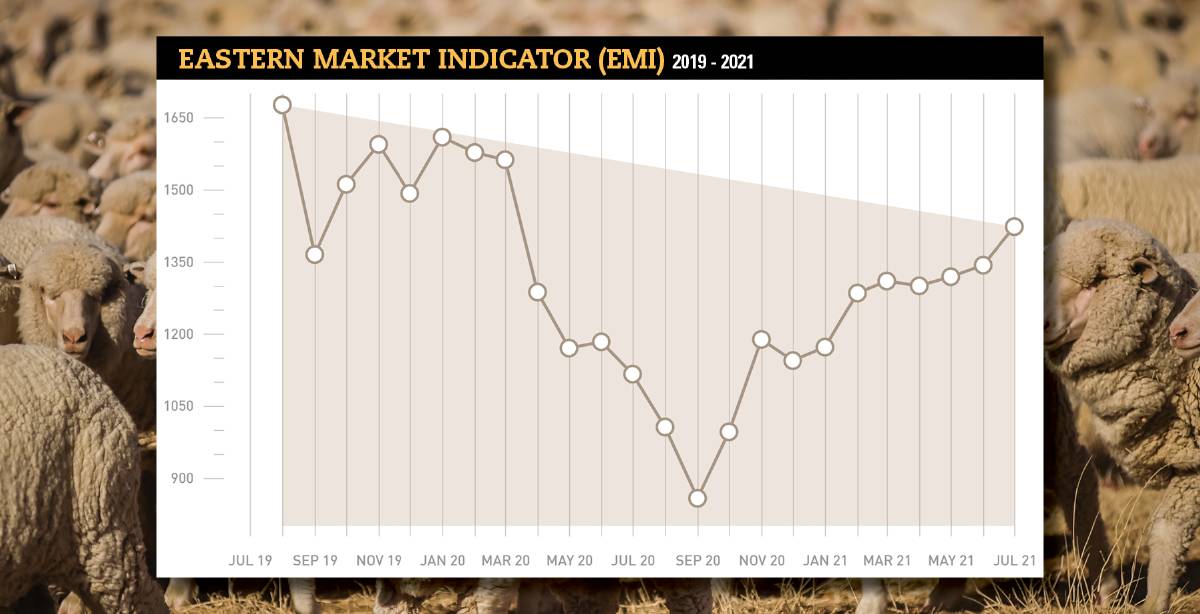 Australia's wool market is a tale of two types of fibres.

This time 12 months ago uncertainty surrounded the Australian wool industry, as the effects of COVID-19 were at their peak.

But fast-forward to where the industry is placed now, and the result has been nothing short of exceptional - considering the various hurdles presented to the market.

At the final wool auction before the mid-year recess, the Australian Wool Exchange Eastern Market Indicator (EMI) was trading at 1428 cents a kilogram (clean).

Year-on-year, this was an increase of 26 per cent.

A tale of segments

"But when we dig into it a bit, it is the individual movements in the market that really stand out.

"For the year, crossbred wool has struggled.

"We are seeing that the demand for crossbred wool is not there.

"It is really unloved at the moment.

"And literally - as many prime lamb producers have done- it has been put to the side."

The 21-micron indicator has improved in value by 6pc during the year.

Mr Hermann said the reason the 21-micron indicator wasn't showing as big an improvement as the general wool market was because the national clip simply got broader in average fibre diameter.

"More wool in the 21-micron category diluted the improvement in that price to some degree," he said.

"So remembering the EMI was up by 26pc, but the 19-micron category was up by 39pc, that again was reflected by less supply of that wool.

"When that really came into focus, is when you look at the superfine end."

Mr Hermann said 17-micron lines were up 922c/kg - or 58pc - year-on-year and the market was flooded with fine wool supply because of the drought.

"But once the drought broke, the supply tightened and that was reflected in the market," he said.

"If you are producing wool finer than 19-micron these are very, very good times."

If you are producing wool finer than 19-micron these are very, very good times. - Mecardo managing director, Robert Hermann

Rural Bank's agribusiness regional manager, Mark Pain, said the wool market was expected to continue to recover in the second half of 2021 as demand improved for wool apparel.

"The EMI is anticipated to trend along the upper forecast range and return to 1500c/kg in the next six months," he said.

"China is expected to continue be the biggest buyer of Australian wool, and is increasing manufacturing to prepare for the Northern Hemisphere winter."

But Mr Pain said price volatility was likely to continue as the supply to market fluctuated.

"Recent price gains are likely to be consolidated in the new season," he said.

"However, stockpiles on-farm and in brokers stores may limit upside - with prices anticipated to favour a gradual rise in the next six months."

China is still the biggest buyer in the room.

Its buyers secured 85pc of the Australian woolclip in 2020-21, taking about 196 million kilograms.

But Mr Hermann said there was renewed demand from other overseas processors, including Italy, Germany and countries in the Czech Republic.

Wool is a really good litmus test for what the economies are doing - it responds to economic growth - Mecardo managing director, Robert Hermann

"They are countries that really value the high quality fibres of fine wool," Mr Hermann said.

"These are optimistic signs, economies are recovering.

"Wool is a really good litmus test for what the economies are doing - it responds to economic growth.

"It's one of those products you don't have to have, but when people have got money, it is a product that people choose to buy.

"That's a great product to be in when things are good.

"It is a problem when things aren't so good."