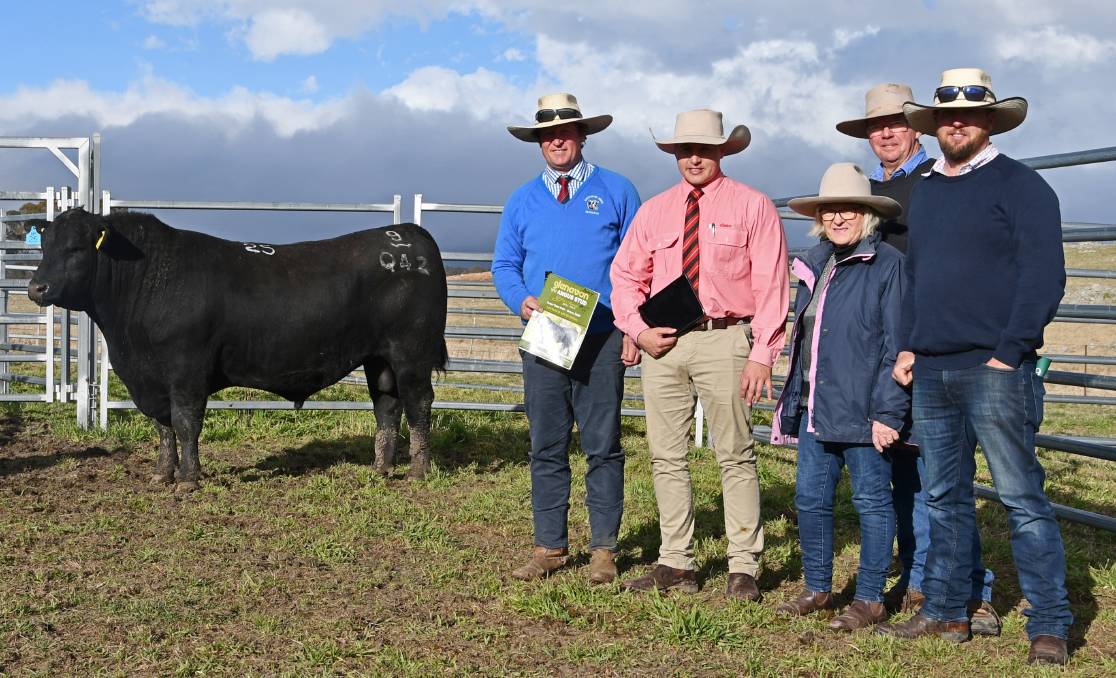 RARE August sunshine across the state's Northern Tablelands welcomed buyers from across the state and beyond to the 37th annual Glenavon Angus bull sale near Guyra on Monday.

A total of 106 bidders registered for the on-property sale, while many more followed the sale online via AuctionsPlus in the hopes of securing one of the 73 two-year-old and 30 yearling bulls up for bids.

The highly-anticipated lot 25 bull, Glenavon Enhance Q042, lived up to expectations and topped the sale at $40,000.

The 25-month old son of Sydgen Advance and out of Glenavon Jody N104 was purchased by Maryburn Partnership, Maryburn, Wollomombi.

"He is a fantastic animal, had the figures to match and had Posty's [stud principal Richard Post] blessing," Maryburn Partnership's Michael Lindeman told The Land.

"Having Richard give the bull a big wrap certainly gives us a lot of confidence in his ability and he is going to have good females to work with, so we're really excited.

"In the short-term, we will probably milk him as part of our AI program and try and keep a few bulls for ourselves down the line.

"Our females are based on this herd and we have been coming here for longer than I can remember, so I think this bull will be just perfect for us."

Glenavon stud principal Richard Post echoed Mr Lindemam's sentiments, saying the bull would be hard to part with, such was his sire ability.

"We used him last year, he's already got calves on the ground that are low birth weight and he is a beautiful type," Mr Post said.

"He scanned extremely well in his raw data, in fact, he was the second highest for IMF in the drop and he was low birth weight when he was born.

"As well as that, he has high growth, was one of the heaviest bulls at 600 days despite being used as a yearling, so he was pretty faultless as a phenotype and he has a good data set to match.

"I think the thing that really sets him apart and makes him valuable to us is that he is out of a beautiful Big Sky daughter that fell pregnant with him on her early in the drought, yet she has continued to get pregnant early and the grand dam has got a strong history of longevity and fertility with three daughters of hers in the stud."

Glenavon Enhance Q042 may have topped the draft of two-year-old bulls and the sale overall, but he had stiff competition from Glenavon SP Nolte R050, which was the best selling yearling bull on the day and was snapped up for $26,000.

The 13-month-old son of Stoney Point Nolte N340 and out of Glenavon J392 was purchased by AJM Pastoral, Burleigh Station, Richmond, Queensland.

Also among the bulk buyers was The Sisters Pastoral Company, formerly RG Allen and Sons, The Sisters, Victoria, which had arguably come from the furthest away to buy six bulls at an average of $13,666.

"We have a long-standing family relationship from when the foundations of our Angus herd were purchased from here, so while we could buy locally, I think it is really important for us and how we run our business to support the relationship and buy from here," The Sisters Pastoral Company's James Knight said.

"Richard and Prue Post have the same breeding philosophy that we do at home so we are really well aligned when it comes to that side of things."

The sale was conducted by Elders Guyra with Lincoln McKinlay auctioneering.