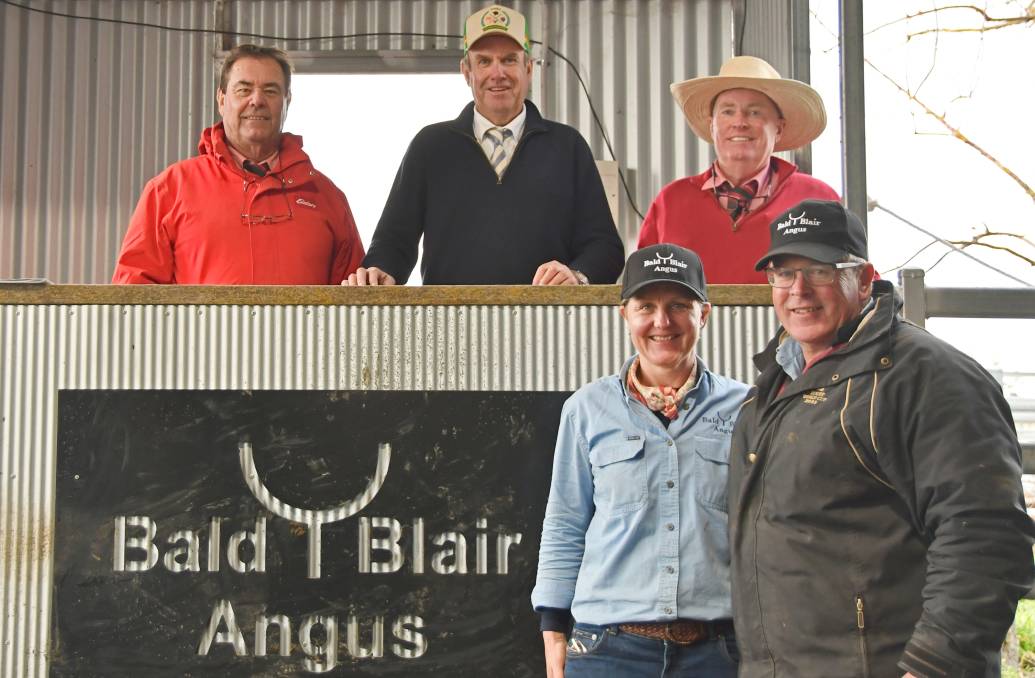 STRONG demand from across the state and beyond helped guide Guyra stud, Bald Blair Angus, to one of its best sales yet.

Icey, wet conditions did not deter 93 registered bidders from attending the on-property sale, while many more followed along online via AuctionsPlus.

All 103 rising-two-year-old bulls offered at Tuesday's sale were snapped up at an average of $13,835.

By Rennylea L519 and out of Bald Blair L222, Q216 on paper showed big potential for his carcase traits.

He was in the top five per cent for the breed for 600-day weight, top 10pc for carcase weight, rib fat and heavy grass index, and was purchased by Foster and Sons, Abington, Uralla.

"I just thought he was magnificently put together, he was soft, moved well, had a great head and he ticked a lot of boxes," Foster and Sons' James Harris said.

"On the figures side of things, he fitted in very well for what we do because he has got a really good 600-day growth weight, which makes me hope his progeny will go like the clappers.

"He will be joined to some cows, we might keep a few bulls from him and we will keep a special eye out for his calves to see how they go."

"He was a very sound bull with great growth, carcase weight, intramuscular fat, feet and is very placid, which is very important," Mr White said.

"His bloodline of Rennylea L519 has been a really consistent breeding bull for us, he's bred for us for nearly four years and we will continue to use that bloodline because he is an exceptional animal.

"We've bred a number of his sons and that particular son was the stand out in this particular draft.

"There's still a number of L519 sons working in our herd and they will continue to produce progeny over the next few years."

Tuesday's sale was one to savour for Mr White, along with his wife Kirsty and sons Abbott and Arthur, as it grossed more than $1.4 million.

Helping spur on the good results were bulk buyers such as Pownall Grazing Pty Ltd, Monto, Queensland, who took 10 bulls to average $17,200; the Murray family, Roma, Qld, which purchased six bulls at an average of $12,333 via AuctionsPlus, and Brundah Pastoral Company, Oaklands, Hillgrove, who took eight bulls to average $12,000.

"This is an extremely good result for Bald Blair," Mr White said.

"We'd just like to thank and acknowledge everyone for turning up and supporting us, weather-wise it might not have been our best day, but nevertheless the support was just fantastic."

The sale was conducted by Elders Guyra with Paul Dooley, Tamworth, as auctioneer.