All 78 bulls offered at the on-property sale near Guyra were snapped up at an average of $14,744. 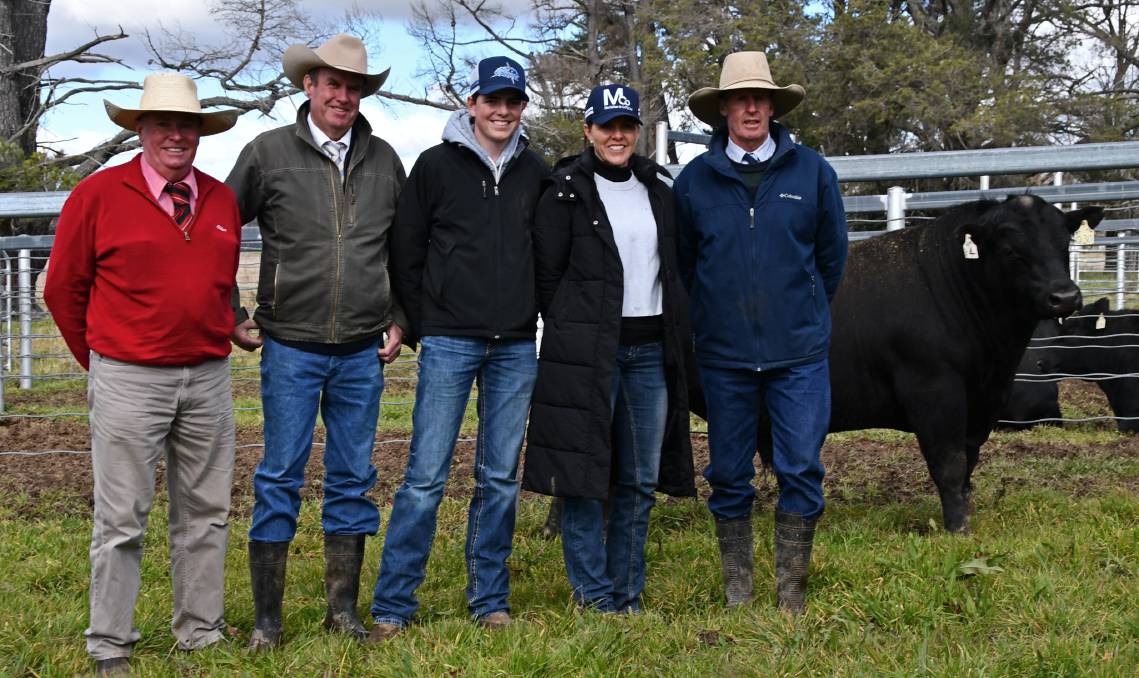 EASTERN Plains Angus achieved a new stud record at its annual on-property sale near Guyra on Friday as all 78 bulls offered were snapped up at an average of $14,744.

The 71 registered bidders in attendance and the many more following the sale online via AuctionsPlus did not have to wait long to see the top-price bulls sold with two going for $24,000 inside the first 10 lots of the sale.

The first to reach the $24,000 mark was Eastern Plains Quigley Q30, which was sold to MacCallum Livestock, Woolbrook.

A 26-month-old son of Baldridge Command C036 and out of Eastern Plains IDA J58 weighed 818 kilograms, rated in the top 10 per cent of the breed in eye muscle area, foot angle and 200-day growth.

"We had our eye on him even before we got to the sale," MacCallum Livestock's Linda MacCallum told The Land.

"He was high yielding with good even cover and had really good growth, so he was a very functional bull and will suit our herd.

"We've got an Angus-based female herd with some Limousin infused in there, so he will go with our main commercial cows that have actually just been brought over from our old property at King Island to our new place at Woolbrook.

"He will add good yield, growth and fat cover, which is what we're after."

The other bull that reached the $24,000 peak was Eastern Plains Querzco Q28, which was purchased by Kialami Pastoral Company, Kialami, Armidale.

The 26-month-old son of LD Capitalist 316 and out of Eastern Plains Miss Eda L80 weighed 762kg, was in the top 20pc of the breed for carcase weight and birth weight, as well as being in the top 10pc for calving ease daughters.

"All of his attributes were pretty well rounded," Mr Belfield said.

"We had about four bulls listed that we were pretty keen on and he was one of them.

"I thought all of the bulls were presented really well, were in good working condition and I think if we look after him he will go on pretty well.

"I bought a bull from Eastern Plains last year, which may have been the second-top price bull, and he has done a fantastic job for us so far and his calves are just starting to hit the ground, which is pleasing and so far they are looking pretty good."

Such was the success of this year's sale for Eastern Plains' stud principals the White family, that it grossed $1.15 million and all but 26 of the 78 rising two-year-old bulls offered sold for less than last year's top of $14,000, of which only two sold for less than $10,000.

"This year's sale has certainly blown all the records out the window," stud principal Andrew White said.

"The industry is going well as a whole, which is making its way down the line and giving everyone a nice boost.

"Both of those bulls have been used as yearlings over commercial cows, they both have the good frame we're trying to breed and they both have plenty of muscle."

Capping off what was a memorable day for the White family was Andrew's father Graham being awarded life membership to Angus Australia and being presented the honour by Graham's nephew and Angus Australia president Sam White.

"It's quite an achievement, we are really proud of Dad and over the years he has done a power of work, has been a great father and really helped set us up in business," Mr White said.

"He and Mum have been great and this honour is thoroughly deserved."

The sale was conducted by Elders Guyra with Paul Dooley, Tamworth, auctioneering.