The second-annual multi-vendor sale was topped at $14,000.

INTEREST from across the state and beyond has helped Mala-Daki Simmentals and Caloona Charolais reach new stud records on Thursday.

A total of 31 bidders registered for the multi-vendor on-property sale at Loomberah, near Tamworth, while many more followed along online via AuctionsPlus.

Auctioneer Lincoln McKinlay did not have to wait long to sell off the day's top-selling bull, as lot one Mala-Daki Shock N Awe Q13 was knocked down for $14,000 to a commercial cattle producer from the Bathurst region.

The Homozygous Poll and Homozygous Black son of RJY Shock N Awe 5D and out of Mala-Daki Lolli M806 weighed 936 kilograms, was in the top 10pc of the breed for calving ease direct, 400-day weight and carcase weight.

"I think his completeness was really what separated him," Mala-Daki Simmentals stud principal Jason Impey said.

"He just had that little bit extra of everything and did everything well from birth weight to growth to carcase weight, he scanned best, he weighed best and I think he was a bit of a no-brainer.

"We've used him in our herd and we have had him collected as well, so we will continue to use him in our program."

Mala-Daki also offered six heifers at Thursday's sale, all of which sold at an average of $5000.

"When you hear the averages, it's a pretty good result and for us, our average is up about $1500 from last year, which is really exciting.

"I think we're heading in the right direction and we are really happy." 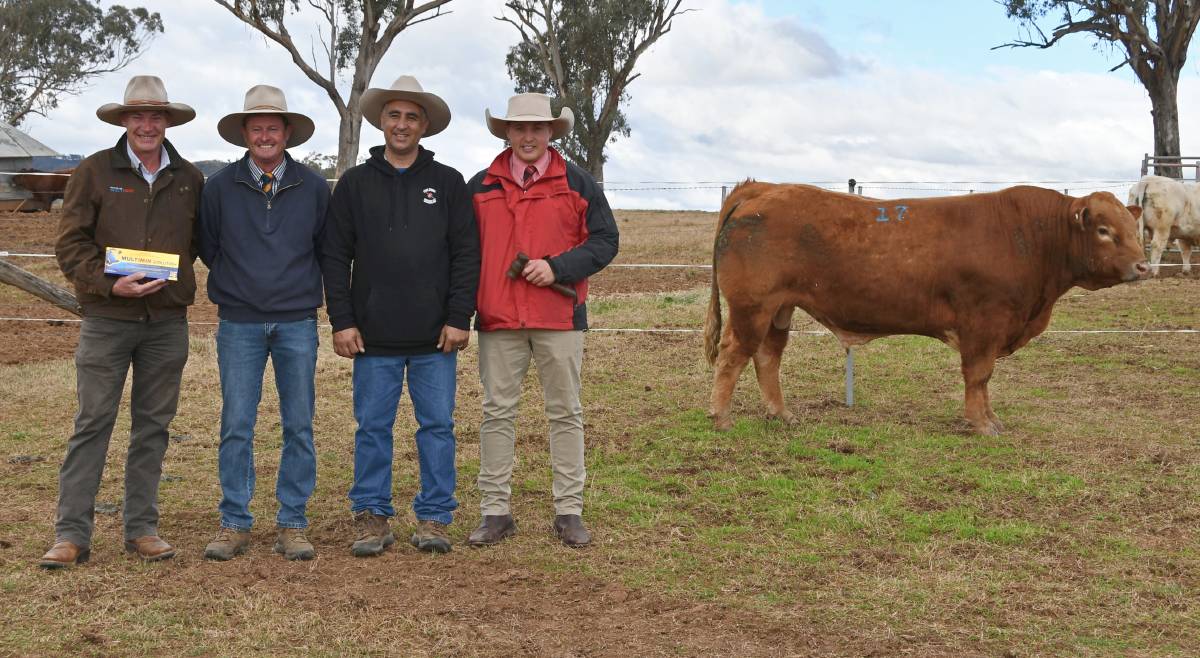 Meanwhile, Caloona Charolais also sold 15 of the 19 bulls it off offered at an average of $7133.

Caloona Park Quigley topped the run of Charolais bulls at $13,000 and was purchased by Nutrien Toowoomba on behalf of a client via AuctionsPlus.

The 22-month-old Red Factor son of Airlie Kit L127E and out of Caloona Park Laini weighed 740kg, had raw scans of 120 square centimetres for eye muscle area, seven and five millimetres of rump and rib fat and was 5.4pc for intramuscular fat.

"I think his qualities really suit an Angus herd quite well and I think the buyers were after some more meat and content in their calves," Caloona Charolais stud principal Louie Franco said.

"I know the operation which bought him runs a really tight ship and I'm confident he will do a really good job.

"He has good muscle, good lines about him, is well balanced and has got good feet and legs about him."

Caloona also offered five heifers at the sale, of which one sold for $4000.

"We've been trying to do a bit of advertising outside our local area and obviously it's working, so we will just continue to do that," Mr Franco said.

"Some of the bulls and females we sold today [Thursday] have gone to repeat buyers, so they must be doing the job, which is really pleasing.

"I think we are certainly going in the right direction and the beef game is going strong, but we feel our bulls are getting better every year, so we are pleased they are going to some new clients and repeat buyers."