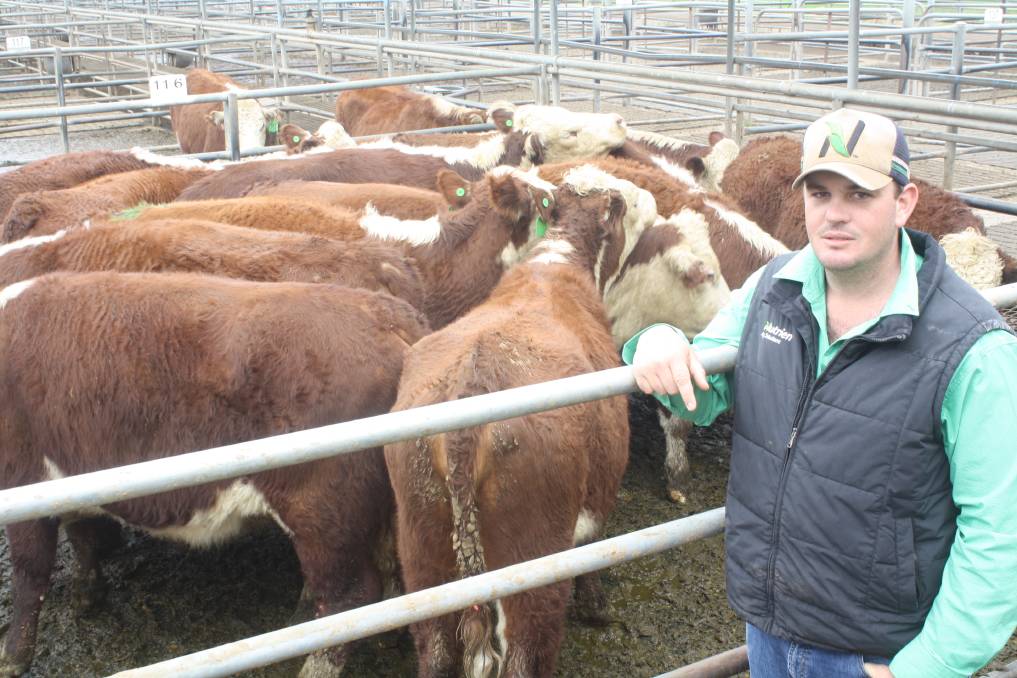 Jordan Rhodes, Nutrien Milling Thomas, Dubbo, with a pen of Hereford heifers, PTIC to Narranmore Angus bull which sold for $2480 a head at Dubbo store sale last Friday. The draft of 43 heifers was sold by the Schneider Brothers, Geurie, and averaged $2400 a head. Photo: Rebecca Cooper

The better quality steers mostly made between 600c/kg and 713c/kg.

PRICES for top quality weaner steers kept pace with the current market trend, while the rest of the weaner yarding was cheaper during the Dubbo store cattle sale last Friday.

All up, 975 head were offered and the bulk of those were weaners.

Meat and Livestock Australia market reporter David Monk said the very best of the weaners were about firm, although most were up to $60 cheaper.

"The best of the weaner steers were top quality Angus calves that made $1780," he said.

He said there was a great consignment of well-bred Angus and Angus-cross calves from the Quambone and Coonamble districts.

MP O'Brien, Quambone, sold eight- to 10-month-old Angus steers for a top of $1780 and Elders agent Ben Marlin said this run was destined for the Inverell area.

Denison Partnership, Coonamble, sold six- to eight-month-old Angus steers in a run of 56 head for $1680. Their top pen of just a couple of steers sold for $1760. They also sold Angus/Bos Indicus heifers for $1310.

A feature line from Schneider Brothers, Geurie, of top quality young Hereford females pregnancy-tested-in-calf to Narranmore bulls made $2480. The draft of 43 heifers averaged $2400 a head.

The better quality steers mostly made between 600c/kg and 713c/kg, while the plainer types sold from 460c/kg to 560c/kg.

The sale was conducted by Elders, Landmark Milling Thomas and PT Lord, Dakin and Associates.

A more detailed report will appear in The Land newspaper print issue available at newsagents on Thursday.