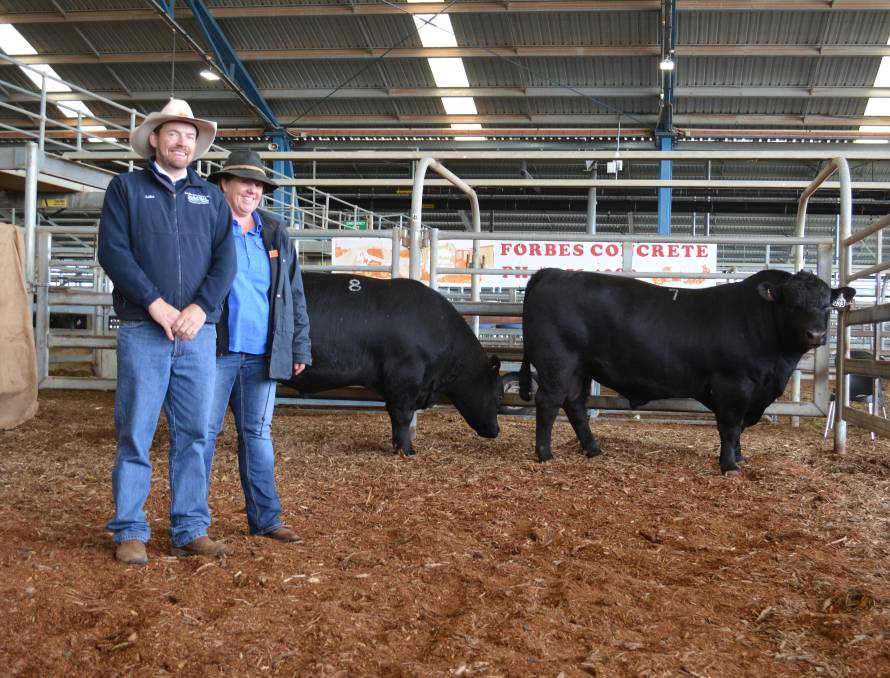 STUDS from across the country did not miss tuning into the annual Moogenilla Angus Bull Sale today to see a hidden gem combining phenotype with a great data set go under the hammer.

Setting a new stud record top price at $64,000 amongst the 48 head offering that averaged a strong $14,583 for vendors Sarah Wrigley and Paul Sinderberry of Moogenilla stud, the high-seller caught the eye of many at the Central West Livestock Exchange, Forbes

Moogenilla Q33 was the 894 kilogram two-year-old that turned heads from the get-go, eventually being knocked down for $64,000 to syndicate buyers Rennylea Angus, Culcairn, Pathfinder Angus, Gazette, Vic and semen company Agri-Gene.

The son of GAR Fail Safe, out of the Moogenilla N9 female that went back to EF Complement 8088, kicked at $26,000 with bold-bidding from online prospective buyers, but soon after the arms of many keen cattleman rose in the crowd.

Late in the piece a commercial outfit enter the bidding war, and as the lot drew to an end, it was Bryan Corrigan of Rennlyea and eventual underbidder Ted Aston, Redlands, Thuddungra, left battling it out.

Mr Corrigan made the final $64,000 bid to secure the sire that had 12 estimated breeding values (EBVs) in the top 10 per cent of the breed, including all four indexes in the top 1pc, calving ease daughters and intramuscular fat (+4.2) in the top 2pc, and carcase weight, eye muscle area and 400-day weight in the top 5pc. A Landfall Keystone K132 son out of Moogenilla N179, he weighed 970kg with a scrotal circumference of 42cm.

Also purchasing the second top-priced sire in last year's sale, the Turners were again volume buyers, purchasing four bulls for an average of $18,625.

Moogenilla Q260, a son of Moogenilla M27, was sold for $21,000 to repeat buyer Ted Aston, the underbidder on the sale-topper, who runs a couple of hundred commercial Angus cows.

AuctionsPlus recorded bids on 33 lots, including 15 bids on the top-priced bull of the sale. Hirino Pty Ltd, Gundagai, purchased three bulls for a top of $13,000 and average of $10,667. Most successful buyers went home with two bulls

The sale was conducted by Kevin Miller Whitty Lennon and Co, Forbes with auctioneer Luke Whitty.