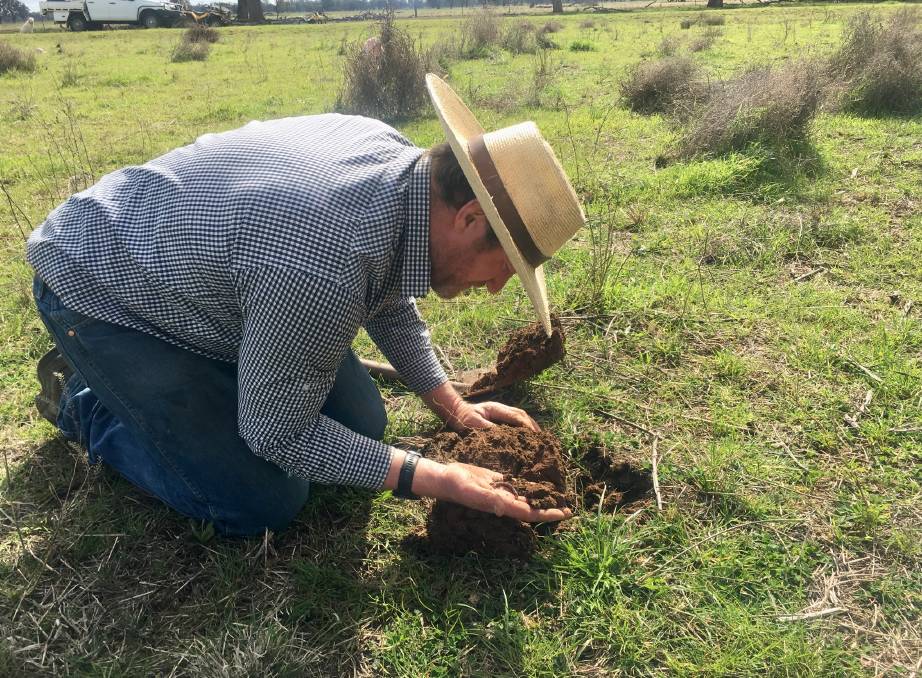 Michael Gooden looking at the soil on his family farm, Willowlee, Sandigo, where he has been time control grazing for eight years. Photo: Michael Gooden

It can be difficult to know where to start when deciding whether or not to get involved in carbon trading.

So a recent Graham Centre Livestock Forum broke this down for producers, looking not just at whether consumers might be willing to pay for produce from a system that captures carbon, but also at potential on farm gains that benefit the producer.

"The whole space of carbon storage and environmental credits is an opportunity to improve the income for landholders," said fourth generation Riverina grazier Michael Gooden during the forum.

His topic was "Carbon trading: Is it worth it for Riverina livestock producers?",and he opened with an observation from RCS Australia's founder, Terry McCosker, that consumers don't pay the full price for agricultural produce, which is being reflected in the degradation of the landscape.

However, he said the restoration of a soil carbon bank could greatly assist in improving the returns for landholders over the long term.

"When we are talking about soil carbon, we are referring to the stabilised organic matter," he said.

Carbon has been around for 375 million years and is part of the natural birth, growth, reproduction and decay cycle, Mr Gooden explained.

"Annual global emissions are in the order of nine gigatonnes of carbon and what we want to know is how we can profitably store that within the existing pool of about 1580 gigatonnes carbon in the soil," he said.

"There are production benefits from increasing soil carbon and there is the monetary component [from trading carbon credits].

These were the pathways through which the landholder could increase on-farm productivity, and increase biodiversity,while also following a path towards an on-farm carbon project.

"There could be two streams of income," he said.

"One is from the latent carbon source and the other is from the production benefits from improving soil carbon."

"But the latest research is starting to show that actual biological activity is also providing another avenue to store carbon," he said.

"I think that will drive a lot of the potential to increase our storage rates over time.

"Studies from the US show there is a big increase in soil organic carbon storage after you have reached a three per cent threshold. And that is basically coming from increased biological activity which is where it gets really exciting."

Putting that into the practical terms of grazing management, Mr Gooden said there was promosing potential in time-controlled grazing.

"We can see in the top 30 centimetres from one tonne to one and half tonnes sequestration per hectare per year," he said.

"But to understand fully the amount being stored on your land, it is important to take soil samples across all land classes and test them separately so you can measure the differences."

The benefits also extended beyond the farm, with the process being one of few in agriculture which created a multiplier effect.

"For every tonne of carbon stored we are taking 3.67t carbon dioxide out of the atmosphere," he said.

But for those landholders contemplating entering a soil carbon project, will the stored carbon be worth anything?

Carbon is basically a commodity, Mr Gooden said, and as such is subject to the normal constraints of supply and demand.

The big drivers for future carbon returns included: The sequestration rate in tonnes of carbon/ha/year; the price of carbon; and, the cost of measurement.

"At this point in time the cost is a big factor because it needs to be a physical baseline measure and that involves labour and big machinery," he said.

"And obviously the scale of the project is really important - I think that is one of the real challenges in the Riverina where at this point in time the scale can be daunting."

Despite the apparent challenges, Mr Gooden thought future prospects of gaining financially from soil carbon sequestration could be influenced now through changes to the current management practices.

He said the thing farmers shouldconsider was what changes have they made to their business which could qualify them for a carbon project?

"Potentially there are operations on the farm which can be done, such as the application of lime or gypsum, the restoration of perennial pastures or altering the stocking rate, duration or intensity of grazing to make it relatively easy to be able to qualify for this type of project," he said.

However, he cautioned landholders to be prepared for the long term if they chose to embark on a soil carbon project.

"If you are looking at setting up a soil carbon project now, measure your initial baseline as soon as you can, because you wont be able to measure the second baseline until 2027 and that is when potentially you will have carbon to sell."