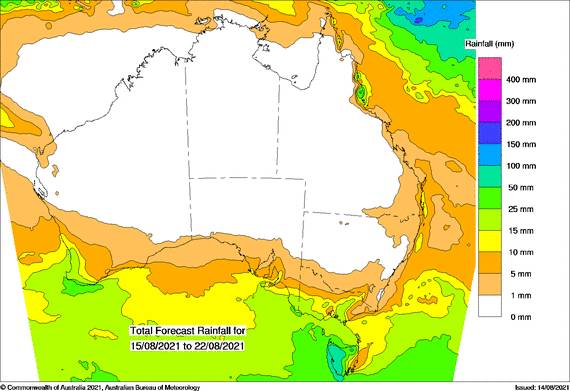 It is going to be a dry week for most of Australia. Image: Bureau of Meteorology.

The Bureau of Meteorology have broken down today's weather and what's to come next week across Australia.

Most of Australia will see "settled" weather this week, with a dominating and slow moving high pressure system overhead.

Bureau of Meteorology senior meteorologist Sarah Scully said weather changes won't be expected to be seen until about Thursday when the next front hits south west Western Australia.

"This week in general, just from a national perspective, we've got a massive high pressure system that's pushing into Australia so it's going to be really settled conditions right across the country," Ms Scully said.

"So there's no real heavy rainfall forecast anywhere across the country this week, it's going to be generally clear skies, light winds."

Ms Scully said those conditions can influence frost and fog development, particularly on Monday for eastern South Australia and inland New South Wales and Victoria, continuing into Tuesday and through the interior and eastern Australia on Wednesday.

"We're forecasting frosty mornings for the interior of the country and for many parts of eastern and south eastern Australia throughout this week," she said.

"With regards to actual significant rainfall totals, there's none on the outlook this week at all.

"There's still a few flood warnings that are current across New South Wales but again, with no significant rainfall expected in the next few days, further rises in the regions are not expected."

Ms Scully said weather in South Australia should stay mild until about Thursday.

"South Australia may get a few showers with the system that is pushing across the south east, mainly about the south east agricultural area on Sunday," she said.

"With regards for the outlook for the week, there's no significant rainfall at all forecast for South Australia.

"They're going to have a big high pressure system sitting pretty much right over the top of them impeding any good shower or storm development."

On Thursday, temperatures in South Australia are forecast to be between 8 and 10 degrees higher than the August average.

Most of the weather action today is in Tasmania, with a severe weather warning over the entire state as of midday Sunday.

"There's currently a cold front that's moving across south eastern Australia and it looks like Tasmania is going to be the state that is most impacted, with damaging to destructive wind gusts on the forecast and actually being experienced at the moment (Sunday, midday)," Ms Scully said.

"Over the last few hours there's been a wind gust of 156km per hour at a location in Tasmania called Maatsuyker Island, there's a number of locations that have experience wind gusts well and truly in excessive of 100km per hour and these wind gusts are expected to continue into late in the afternoon (Sunday) for Tasmania and into Monday morning for Victoria and New South Wales."

Ms Scully said forecasting by the end of Monday indicates that there may be cumulative rainfall totals across Tasmania of 5mm to 15mm across the north east, increasing to 20mm to 40mm about the west and local falls of 60mm to 70mm in elevated areas.

She said southern Australian is "really saturated" at the moment, and an initial flood watch had been issued already for the Huon and the Derwent catchments.

"We're keeping a close eye for any further rainfall across that area," Ms Scully said.

"For the rest of the week, the showers will start to ease off as that cold front moves away into the Tasman Sea, with just coastal showers throughout the week until the next front crosses over the area and that's not until next weekend."

Ms Scully said the weather is a lot more mild in Victoria, however some areas of southern Victoria will potentially get some damaging wind gusts today (Sunday).

"With regards to rainfall we're not expecting it to really affect Victoria significantly at all, they may get some showers," she said.

Queenslanders can prepare for a warmer weekend next weekend, but inland Queensland is not forecast to receive any rain in the coming week.

"They've pretty much got an on-shore southeasterly flow right across the south east of Queensland so that brings fairly moist conditions and showers, so it will be kind of tepid across that east coast of Queensland," Ms Scully said.

Unsurprisingly, Ms Scully said the Northern Territory are in the dry season and are not expecting any rainfall.

After wet, cold weather for the last month, Western Australia can expect a bit of a respite from those strong and gust cold fronts that have been through.

"There's also a bit of warmth or heat that's building over southern Western Australia into tomorrow, which will continue to build until mid-week with maximum temperatures forecast to be anywhere between 4 and 8 degrees above the August average," Ms Scully said.

On Thursday, Ms Scully said a cold front in WA's south west will have the potential to create widespread showers and windy conditions engulfing the south west corner.

The story Week ahead in weather | NATIONAL WRAP first appeared on Farm Online.