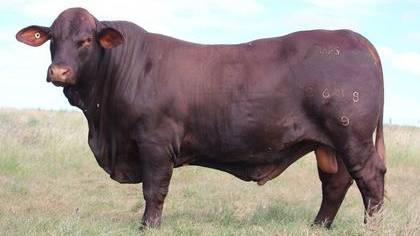 "Our studs are at the same stage, it's time to put frame and breed character back into our herds and we only live an hour apart so it made sense to band together to secure top genetics and improve our herds faster" explained Yarrawonga stud principal, Andrew Bassingthwaighte.

Described as a "true stud sire" the 23-month old son of Watasanta Monkey 2244 is out of Watasanta 1769, a highly regarded female in the Watasanta herd.

"She (1769) is sired by Grandboy (P) a successful sire and show bull. The cow has great constitution always holding her condition" stated Neil Watson in the catalogue comments.

"It wasn't just his strong pedigree that drew us in but more so his character, frame, excellent sheath and reproductive figures" added Mr Bassingthwaighte.

The "powerful" Santa Gertrudis bull described by Mr Watson as "boasting a dark slick coat, ultra tidy sheath, large testis, very sound feet, legs with a little added muscle and carcass shape" will have semen collected once arriving in Queensland before residing at "Waco" and mating with 25 cows from each stud.

"The structure and breed character in the herd is impeccable and we are starting to see great advancement and want to be apart of that movement." explained Mr Bassingthwaighte.

Mr Moxey, who runs 500 cows including 150 stud Santa Gertrudis females, said Prime Mover will be a huge influence on their stud and commercial operations.

"We wanted something to lift us to the next level."

"He has size, volume and even though a poll he didn't lose strength of bone or muscle." said Mr Moxey.

The sale draft attracted buyer competition from stud and commercial producers across the New England, North and Central West NSW and up into Queensland.

Sale conducted by Davidson Cameron and Co, Tamworth with Paul Dooley as the auctioneer.