While another remote shed locked down after covid case 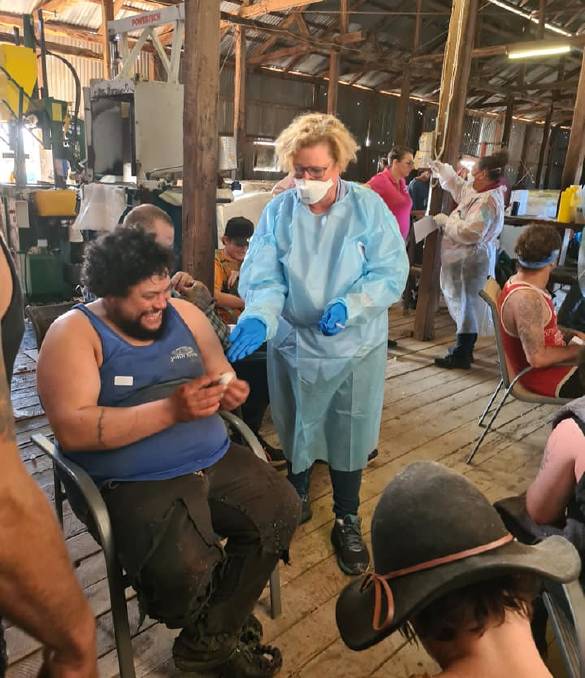 Shearing shed turned into a corona vaccine clinic at Bangate Station as the Royal Flying Doctor Service gave some Pfizer vaccine shots to shearers while the shed was underway. Photo courtesy of Muddy's Quality Shearing.

As one shearing team was locked down near Wilcannia after a shearer tested positive for COVID, another Goodooga shearing team has had a fly-in visit to offer vaccinations during shearing.

A whole team of 14 shearers and shed hands have been locked down south of Wilcannia after a shearer who went into town picked up the coronavirus. He was tested before leaving the property and came back positive.

Wilcannia is on high alert after COVID broke out there a week ago following a large funeral gathering, with many cases listed in the last week.

Unfortunately the shearing team will have to be locked in for 14 days just as they had just finished shearing - which means two shearers living in each of eight rooms. It is believed the station owners' family have been relocated from the property.

Meantime, a shearing team at Goodooga has had a flying visit from a nursing team from the Royal Flying Doctor Service offering the Pfizer jabs to shearers from Muddy's Quality shearing.

Steven Mudford said his shearing team was at Bangate Station shearing when they had a call from the RFDS nurses in nearby Goodooga saying they had extra Pfizer vaccinations available if the shearers wanted to take part. There had not been as much uptake as expected in the RFDS clinic in the Goodooga township.

The nurses drove 30 minutes to the station set up a clinic in the shearing shed (above) and vaccinated all but two of the shearers. 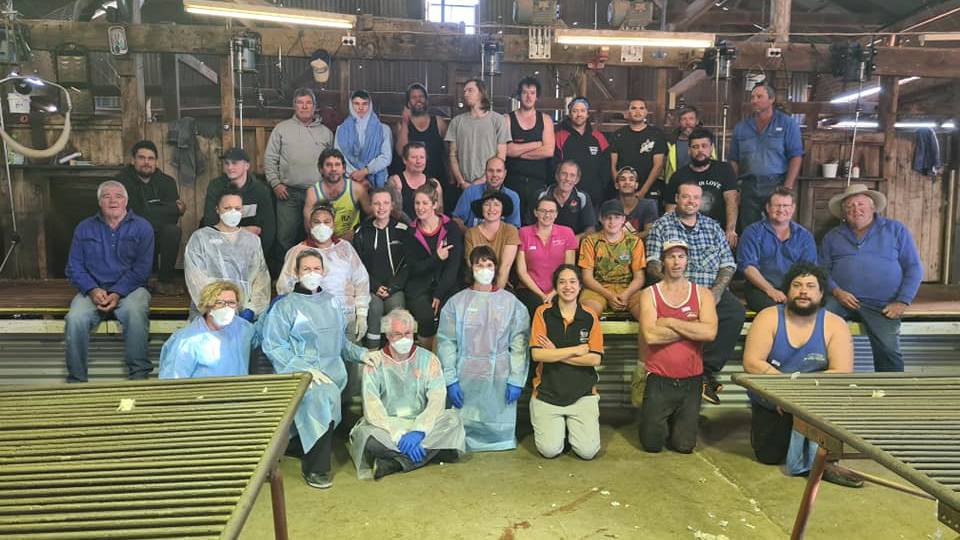 Bangate Station rolled up its sleeves against COVID.

Mr Mudford said he accepted the offer with both hands - both he and his wife had their first Pfizer jabs, and said there should be more of such workplace vaccination offers.

The shearing industry was finding it tough to complete business during the current regional lockdown. Even though shearers had been classified as essential workers, he'd already had one of this team turned back on the highway by Highway Patrol police near Dubbo, despite the worker explaining his situation.

Mr Mudford said he would be taking it up with state Barwon MP Roy Butler to see if more could be done to get vaccinations for remote NSW workers, and preferably onsite when, as in their case where they were working. 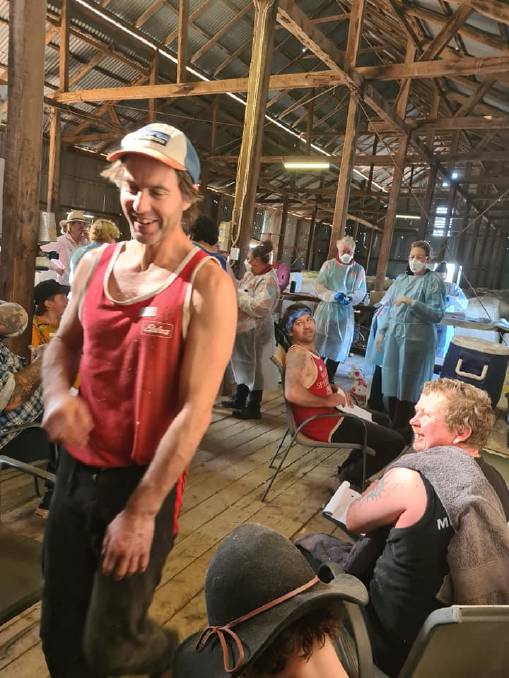 "This was a good news story and we thank the RFDS for coming out," he said.

"This will enable all of us to keep working. They are offering clinics for vaccination at Gilgandra on September 11 and 12, but we need to keep working now. It will benefit people at any rate if they had more of this at the workplace. It also saves a day off going to get the jab."

Also read:Growers may give up double shearing due to shearer drought

The Australian Workers Union has also issued a press release saying it was concerned about the attitude of some shearing contractors towards vaccination.

The AWU said it was "extremely concerned" about the workers' welfare, with the farm in a remote, isolated location near Wilcannia.

The AWU said "shearing and shed hands had told the union many woolgrowers and contractors were failing to act on health measures designed to stop the spread of the virus".

"It is disappointing this outbreak has occurred so soon after we publicly raised concerns about this issue to try and get everyone to take it seriously," said AWU NSW vice president and shearing organiser Ron Cowdrey.

"Last week we again saw a 'she'll be right' attitude by some shearing contractors - well now it's clearly not all right. The powers that be at the Shearing Contractors Association of Australia (SCAA) need to take their head out of their arses and start doing the responsible thing for their members and the industry.

"Shearing and shed workers regularly work and travel between multiple sites and states, and we warned that unless the industry took COVID safety seriously it was a disaster waiting to happen - clearly that disaster is now closer to being the case."

Mr Cowdrey said it was essential for the industry to get together and develop an urgent but sensible response to the dangers posed by the pandemic. This should include:

He said woolgrowers and contractors "could follow the example of other businesses by taking a few simple steps to protect themselves and their workers", including:

"Shearing is considered an essential service and everyone needs to do their part to keep the industry operating," he said.