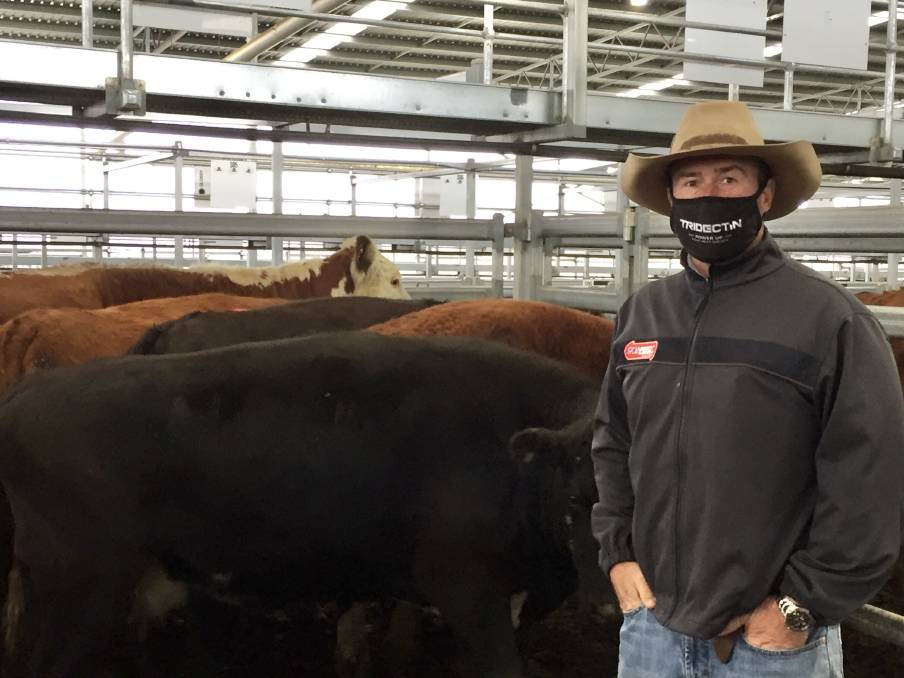 Shad Bailey from Colin and Co with shorthorn cross cows (weighing 700kg) from Kerina Pastoral, which sold for 372.2c/kg or $2604. Photo: Steven O'Brien/IRLX

Primary producers armed with crop prospects can see the value in paying $1400 a head to turn a profit of $600 within four months.

"We are seeing strong demand from croppers from Moree, the Hunter Valley, Tamworth and Ebor instead of processors for cull cows," Laurie Argue from Kempsey Stock and Land said.

"This is forcing the processors to pay a bit more for better quality cows where restockers are trying to make a quick return by utilising their cropping country."

Shad Bailey from Colin Say and Co, Glen Innes, said they have not seen high numbers of store cows in their market but instead cattle coming off crops or pastures.

At Inverell sale on Tuesday a pen of shorthorn cross cows (weighing 700kg) from Kerina Pastoral, sold for 372.2 cents a kilogram, or $2604/hd.

"What I would say is that a surprising number of young cows are not being given a second chance to rejoin as the money is greater," Mr Bailey said.

"Farmers would rather take the money than build herds, which will see the rebuild take longer that anticipated."

At Forbes Adam Chudleigh from McCarron Cullinane said prices for cows had been "unbelievable".

"It's the best we have ever seen, who knows when it's going to stop," Mr Chudleigh said.

"If anyone can see a dollar in something or put a weight on they will try their best to do it."

But he said while they had been yarding some cows, they were not seeing large numbers as producers were holding onto what they could.

"People are trying to retain as much as they can and keep breeding numbers as much as possible because buying replacement cattle is hard," he said.

"Forbes historically is a big trading region so people trying to get back into younger breeders are now paying a fair bit of money."

He added that at their store sale on Friday there were 600 preg tested cows that went under the hammer for between $1700 and $2600.

Tom McGregor from Elders Goulburn said there had also been a lack of cull cow numbers, with no more than 50 to 100 cows a week, as many producers had gone through their "empties" from last year.

He said they had been fetching 380c/kg for 650kg to 700kg animals due to the lack of numbers and quality.

"The season is setting up for a big spring...with 30 to 45mm of rain in the last couple of days, so anyone with crops and pasture will see it take off," he said.