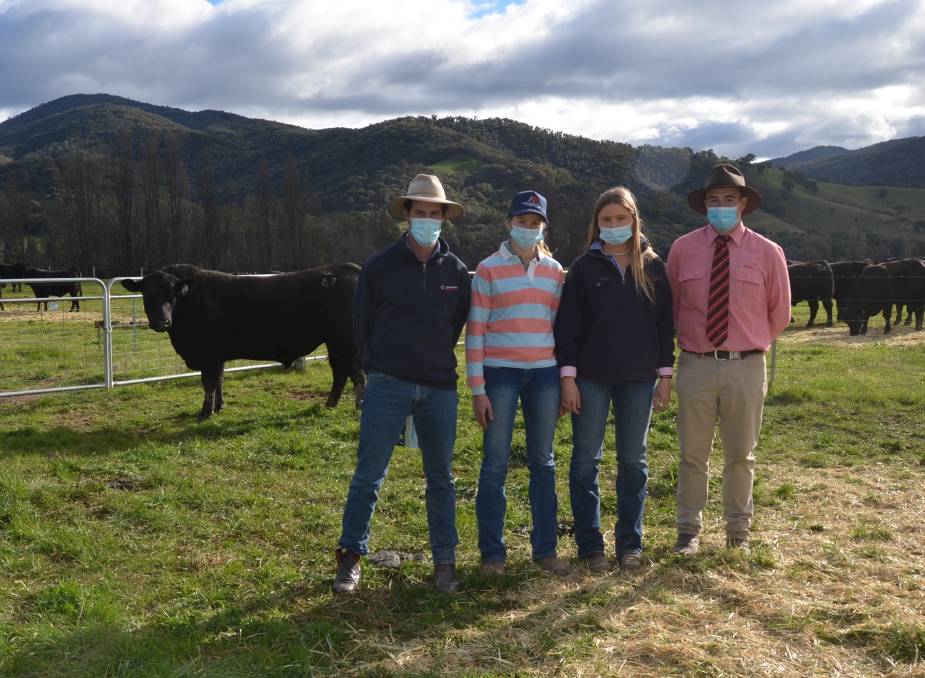 The result was the best recorded at the Talmalmo on-property sale, the top price a $41,000 increase on last year's result, while the average was 66 per cent higher than the 2020 sale.

Despite the lockdown, the auction was watched by a large crowd of participants both in person and online via AuctionsPlus.

It began with a bang when all 200 Angus unjoined heifers, 11 to 12 months old, sold to a single vendor - Boambolo Pastoral, Euberta taking the option of buying them all after purchasing the first pen of 25 for $2850 a head.

The next moment of excitement was not far away, Bannaby Angus, Taralga purchasing the second bull offered on the day for $60,000.

The bull they were chasing was Ardrossan Nectar Q67, a two-year-old by Millah Murrah Nectar N334, who stood out for his feet and growth. "There's three generations of really good feet there, in the top two per cent of the breed," Mr Bulle said.

Purchaser Bannaby Angus manager Glynn Langford said the bull was an outcross sire for them.

"He fits in with the sort of cattle we're producing and we'll use him across our Q drop," Mr Langford said.

"He's really a meat-machine, he'll enhance the numbers on some of our cows and moderate some of our bigger cows.

"His growth is right up there, and his IMF and EMA, and he has excellent feet which is really important to us given our country."

Branga Plains bought three bulls for an average of $22,333.

On top of the 102 Angus bulls, Ardrossan also sold nine of 10 Ultra Black bulls at auction.

The bulls were sired by Brangus and out of registered Ardrossan Angus cows. They sold for a top price of $15,000 and average of $7375.

The top price was paid by RW and TM Hulme, Holbrook and was one of two Ultra Black bulls they bought.

It was the first time the stud had offered Ultra Blacks but Mr Bulle said they had been selling Angus bulls into Queensland for a long time.

"We're pretty keen to buy a property up in Central Queensland where we can expand, we think we can run Ultra Blacks up there," Mr Bulle said.

"We really like the Ultra Blacks, they perform really well and we think they're really good cattle to feed, they've got a lot of performance in them."

An undisclosed Gundagai buyer took home eight, while 20 bulls were sold on AuctionsPlus.

There were plenty of local bidders in the mix along with clients from Queensland and Victoria.