The Spencer family achieved a new stud record at its annual bull sale as 80 of 81 bulls offered were sold. 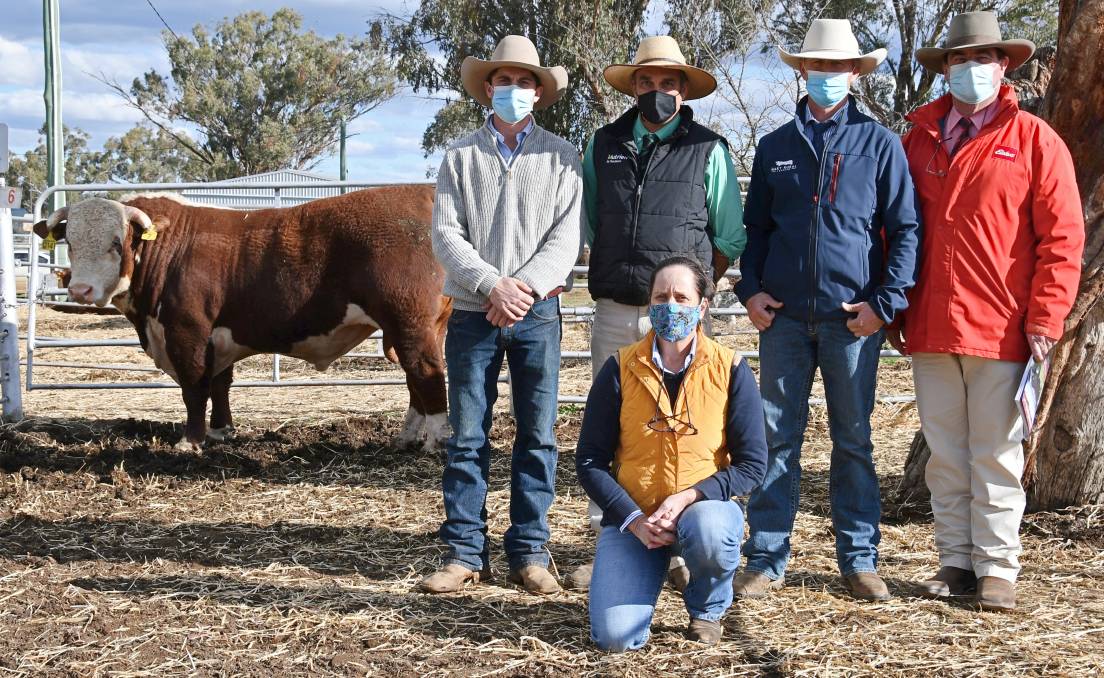 A BUZZ filled the air at the Mulwaree yards at Barraba on Friday as buyers from across the state and beyond descended on Ironbark Herefords annual bull sale.

A total of 60 registered bidders flocked to the sale while many more followed along online via AuctionsPlus and Stock Live to get their hands on the 81 bulls being offered by the Spencer family.

During the live auction, 78 bulls were knocked down while two more were sold at its conclusion, bringing the sale's overall average to $11,712 with a clearance rate of 99 per cent.

Auctioneer Paul Dooley did not have to wait long to knock down the top selling bull as lot seven Ironbark Marshall Q141 sold to Noel and Liz Cook, Kindon Station, Goondiwindi, Queensland, for a new stud record top price of $54,000.

"That is a record top price for us and I think he is the best bull we've bred," Mr Spencer told The Land.

"He's come up under the same conditions as all of the others and he has just come up better, in fact, I call him a man amongst boys.

"The Cook family has been buying here for about 20 years or so and I am confident he will do a good job for them up there in Queensland.

"Noel Cook has bought a lot of our top bulls before but I reckon that's the best one."

The two were among six bulls purchased for more than $20,000, with Ironbark L065 Advance Q215 being the second best top-seller, knocked down to Nara Pastoral Holdings, Burnie, Tasmania, for $32,000.

"What we aim for is length, muscle, colour type and just those good dark bulls that suit our country," Australian Food and Agriculture general manger Justin Campbell said.

"Down south, conditions have been a bit tough where as at Wingadee, we've had two good years in a row, so we are getting our cow herd numbers back up again.

"We usually join in October for spring and again autumn in May, so these bulls we almost go straight to work once they get home.

"The company has bought here for many years, our steers get to weight quickly and they do a really good job for us."

"To get a clearance rate like that is just fantastic and for an average of just under $12,000 is a fantastic result," Mr Spencer said.

"We are just so humbled by everyone's support and while the dry times really cut our numbers back this year, we will back up to our usual sort of numbers next year."