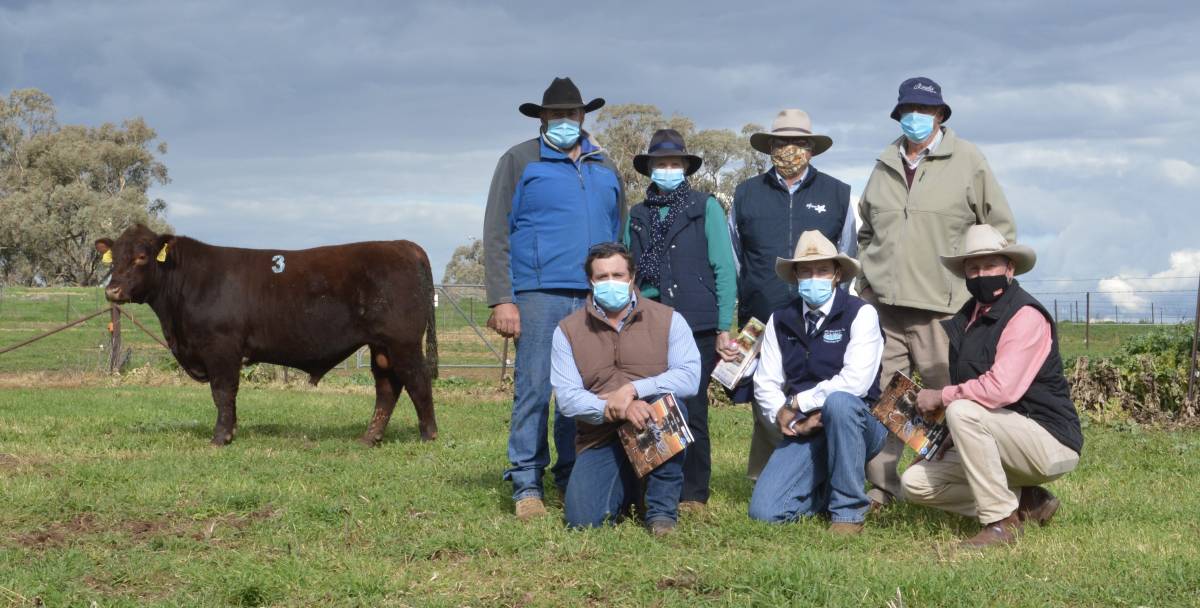 The results capped off a great year for owners Nicholas, Neilson and Sue Job, who won the major accolade of supreme champion bull at Beef Australia 2021 in May with their bull, Royalla Ventura P158.

As the sale kicked, it was no surprise that a half brother to Ventura P158 met strong competition from a number of studs battling it out for ownership of the bull that Neilson placed right at the top of the list of the best bulls he has bred in the 50 years of breeding stud Shorthorns.

Royalla ZZ Top R046 was the $56,000 high-selling bull that demanded attention, catching a number of stud principals' eyes across the east coast.

But no one could out-bid the Williams family of Polldale Shorthorns, Dubbo who made the final bold-bid to secure their new stud sire.

"He is the best bull we have seen in a long time," Polldale's Kim Williams said.

"He is a very complete, an even bull throughout his figures, he has sire's outlook, no holes and good temperament, he is good in the stones and sheath.

"He is a stud sire, perfect for breeding seedstock cattle which is what we do. He is the type of bull we have been looking for, for a while now."

A homozygous poll son of Royalla Rockstar K274 and out of Royalla Melody N449, the 16-month-old weighed 638 kilograms with a scrotal circumference of 41 centimetres, an eye muscle area (EMA) of 104 square centimetres, rump and rib fat measurements of 11 millimetres and 9mm and an intramuscular fat (IMF) of 6.4pc.

Also selling to stud was Royalla York R083, a 588kg homo-polled son of Marellan Star JOBL168, that made $12,000 and was purchased by Moombi Shorthorns, Cumnock.

The sale was conducted by Elders with Kevin Miller Whitty Lennon and Co (KMWL) and Luke Whitty (KMWL) was the auctioneer.

Royalla's Nicholas Job said it was a great day, with repeat buyers fuelling the bids and a lot of action online.

"Thank you to all those that attended and those that were operating online, we appreciate your continued support," Nicholas said.

"It has been 50 years since my grandfather, uncle and dad [Neilson] started the stud, and this result caps off a really great year for us."

Overall 16 bulls sold to online buyers through Elite Livestock Auctions, many of whom were multiple buyers.

The sale was conducted by Elders with Kevin Miller Whitty Lennon and Co (KMWL) and Luke Whitty (KMWL) was the auctioneer.