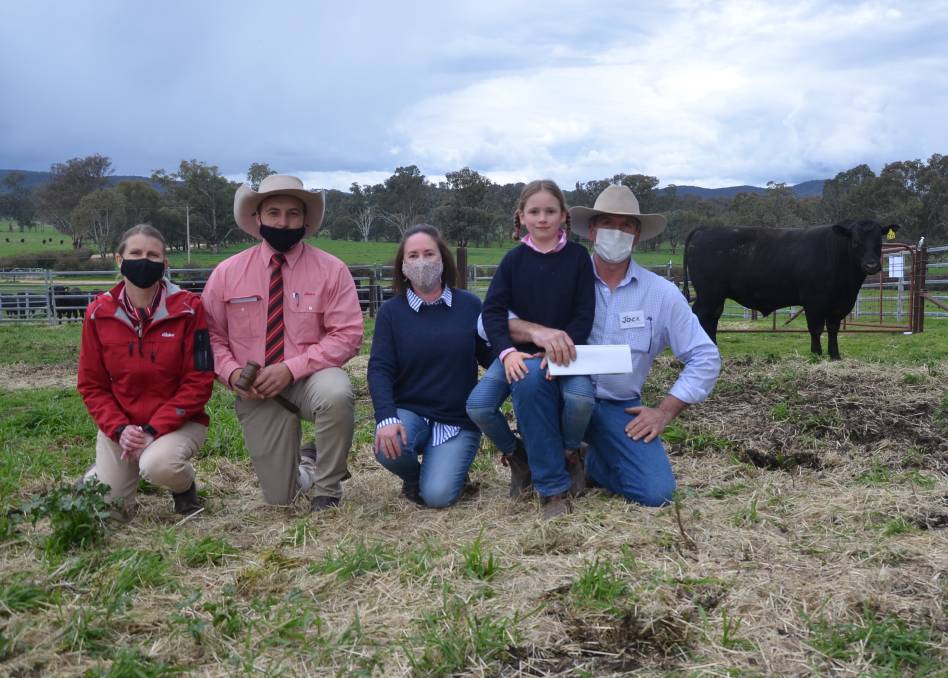 Commercial buyers underpinned Dunoon Angus' 41st on-property sale, the Holbrook stud achieving a total clearance of 158 bulls for a top price of $68,000 and average of $13,823.

It was no surprise that it was Dunoon Q1163 by Dunoon Newcomer N394 who was the sale-topper, the reputation of the two-year-old sire preceding him given his impressive estimated breeding values which included an industry-leading intramuscular fat (IMF) value of +5.0.

There was plenty of competition for Q1163 but in the end it was a two horse race, with Bongongo Angus, Coolac beating out ABS Australia to take home the sire.

Dunoon stud principal Jock Harbison said the bull, who goes back to the Dandaloo and Princess cow families, had a very good structure and quiet temperament.

"He has a really good birth to growth ratio but the marbling figure of plus +5.0 puts him out alone," Mr Harbison said.

Bongongo Angus principal Bill Graham said the bull was a phenotype plus genotype package, while his genetic line offered diversity to the Bongongo stud.

"It might be our lucky day, he could be a very good investment, he's a hell of a good bull," Mr Graham said.

"He's got that conformation and the muscle type, which carries right through to his rear end, and then he has the x-factor under the skin as well, with the high IMF."

The second-highest price of $34,000 was paid for Dunoon Q317, another son of a Dunoon yearling sire, Dunoon Numurkah N185.

"We use quite a few industry bulls, widely used Angus-breed bulls, and to have our yearlings in the mix with them is really encouraging," Mr Harbison said.

The huge majority of bidders were commercial operations who were prepared to compete hard for their picks of the large draft on offer.

Mrs Bond said they ran 540 cows and they would use the bull in both their artificial insemination program and natural joining.

"We liked his overall outlook, his balance and structure, then of course, his figures were very nice across the board, especially his fertility," Mrs Bond said.

"We thought he would be a good investment and herd improver so we went for it."

The first 15 bulls sold made an average of $22,133 and all had been used by Dunoon over their heifers and cows last spring.

"Today just goes to show that when commercial breeders have money they will invest in genetics," Mr Harbison said.

AuctionsPlus bidders were very active with 47 lots sold via the online platform, 30 per cent of the catalogue.

Volume buyers present on the day or on the phone included Verge Pastoral, Nagambie, Vic and Tait Pastoral Company, Mandurama, who came away with six bulls each for an average of $21,667 and $12,500 respectively.

Bulls headed across NSW and Victoria, including a large contingent sold into Gippsland, while Queensland buyers were also represented.

The sale was conducted by Elders and Elders' auctioneer Lincoln McKinlay undertook a mammoth effort to sell all 158 bulls in the draft.