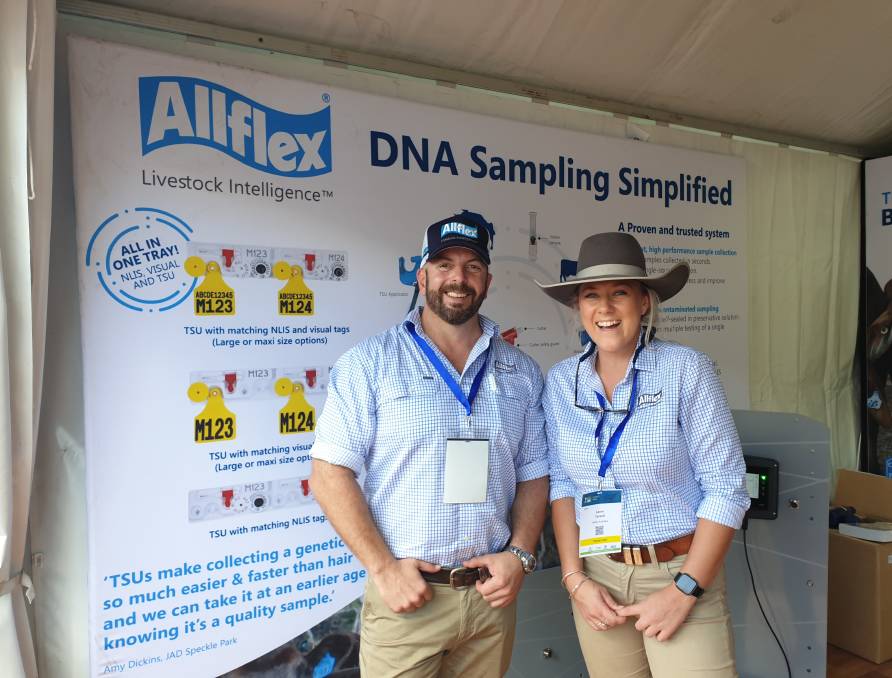 Improved tags: Allflex sales representatives Chris Richards and Laura Tansell were part of the team flying the flag for the company at Beef in Rockhampton this year.

Based on 2020 NLIS market share data, Allflex is still the tag of choice for Aussie farmers.

Based on 2020 NLIS market share data, Allflex is still the tag of choice for Aussie farmers. Allflex Australia business unit manager Jane Parker said this mantle has continued to be upheld because the company continues to evolve and meet farmer's needs.

"In 2014 we responded rapidly to consumer feedback on our NLIS cattle tag in Australia and released an improved male button with an optimised design after significant research, design modelling and independent lab testing," Ms Parker said.

"Since its release over seven years ago, our latest design has demonstrated fantastic results, with no reports of tag failure or lack of retention due to failure of the male button.

"The high-performance of our current tag, with its improved design, has clearly been demonstrated through Australian field trials, laboratory testing and customer feedback."

"Due to the number of tag losses I was seeing throughout my breeder heard, it prompted discussion with Allflex which lead to multiple tag trials being conducted on our property," Mr Olive said.

"In 2014 Allflex replaced the old NLIS button with a new and improved button. This new button was one of the tag trials we conducted on our property. That particular tag trial with the new Allflex NLIS button was very successful. "I have seen the results firsthand and I'm thoroughly pleased with the improved design of the new Allflex NLIS male button."

Six years on from that trial, the Olives' retention rate is very high, and they still use Allflex tags as they have confidence in the product.

"We've stayed with Allflex as they continue to invest in R&D around maximising tag retention.

"Allflex's technical team have been fantastic. They've listened to my needs as a producer and have delivered solutions.

"I like working with Allflex as they invest in product trials and new developments.

"Allflex consult with producers; they get the feedback and make improvements to deliver practical advantages on the ground."

Third generation cattle farmer Glen Rea, runs close to 5500 head including breeders, bullocks and calves at Kirknie Station, Home Hill. His 28,000 hectare station is a foundation Droughtmaster stud started by his grandfather Bob Rea in 1946 and developed by his father Don Rea.

"I've worked with Allflex since 2008. Since that time, I have used NLIS tags from Allflex. From time to time I've used competitor's tags, but I keep coming back to Allflex. I believe Allflex has the best product currently on the market," Mr Rea said.

He said he has noticed an improvement in tag retention since the old days before Allflex's release of the new male button tag design.

"I found the change from the old style pre-2014 to the new design post-2014 in itself is a pretty good change. The newer button seems to last longer than the old button."

Mr Rea doesn't think any other company has a lead on retention like Allflex.

"Allflex is putting more effort into making their product the best in the market.

"Retention is an industry wide issue.

"Retention has so many factors involved not just weathering from the sun, heat and humidity - but mechanical damage from the torque loads the animals put the tag under; such as bull fighting, rubbing the tag up along railings, chewing and biting off other animal's tags, catching on obstructions, buffalo fly irritation and the constant whacking of ears and tails to relieve this. "For safety reasons the tag is designed to break rather than rip through the animal's ear if it gets caught in an obstruction such as a hay bale or fence."

He said he has stayed with Allflex for as long as he has because they listen to the feedback he has provided them with, and they've then worked on solutions that work in his country that he's satisfied with.

"We're working to develop the product and make it suitable for northern Australia and North Queensland climates through trials and research and development so that users have the best quality product," Ms Parker said.

"Leveraging our R&D strength, Allflex continues to strive to be the world leader in livestock identification and traceability. We do this by designing products to meet our customer's needs, and by optimising our tag designs for reliable retention, with a relentless commitment for improvement, new technologies and research."