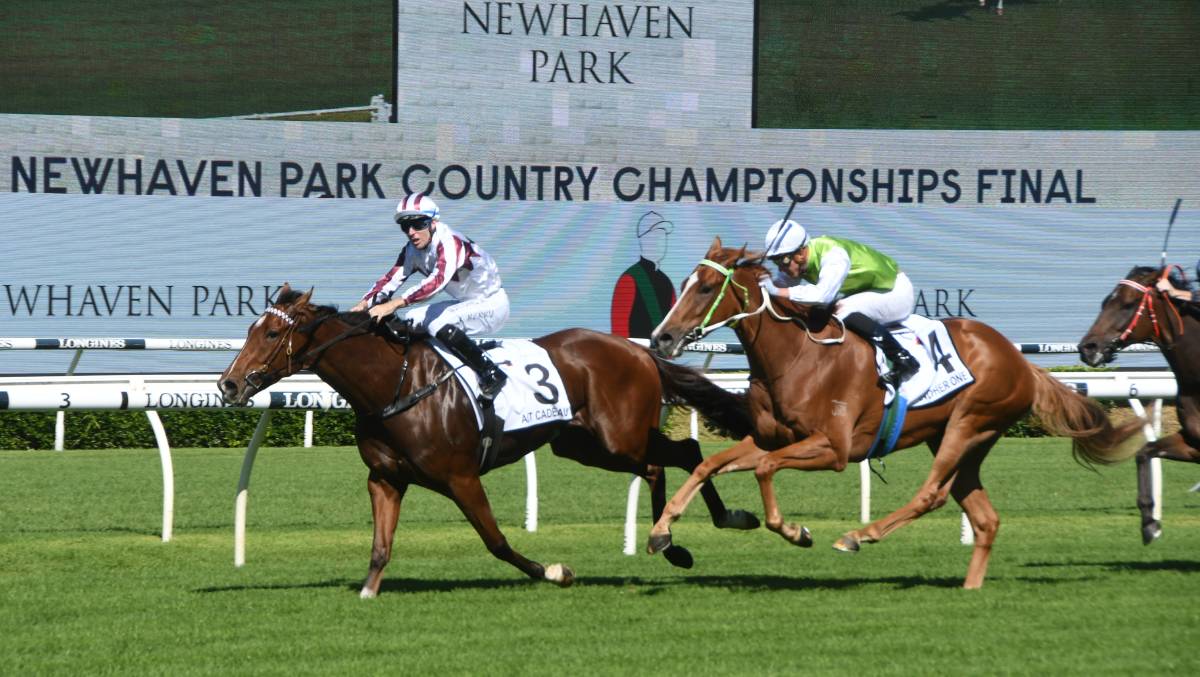 Among The Kosciuszko hopefuls is Art Cadeau (and Tommy Berry) and Another One (Nick Heywood) first and second in the Country Championship Final at Randwick in April. Photo Virginia Harvey.

PUNTING syndicates all over the State have been gathering momentum to gather people to invest in the hope of gaining a slot - via the purchase of a $5 ticket, which will represent them in the $1.3 million The Kosciuszko, the richest race for country trained gallopers in the world.

Included on the massive The Everest program at Randwick on October 16, every Kosciuszko runner (of 14 entrants) is nominated via a sweepstakes draw - done by a random number generator, and which will be conducted by Racing NSW next Thursday September 9 at its Sydney offices.

Tickets are sold through the TAB App or at TAB venues and outlets.

Each drawn winner will then select a NSW country or ACT trained horse to race in their slot after agreeing with the horses' owner/s on just how connections will share in the prizemoney.

A re-match seems likely in the event from the quinella of this year's Country Championship Final at Randwick which was won by the Terry Robinson trained Art Cadeau which defeated three-year-old Another One, both aiming to gain slots.

According to Another One's Wagga Wagga trainer Gary Colvin, the galloper has been improving steadily following his first up third placing in the MTC Ian Reid Sprint feature last Thursday at Wagga Wagga. 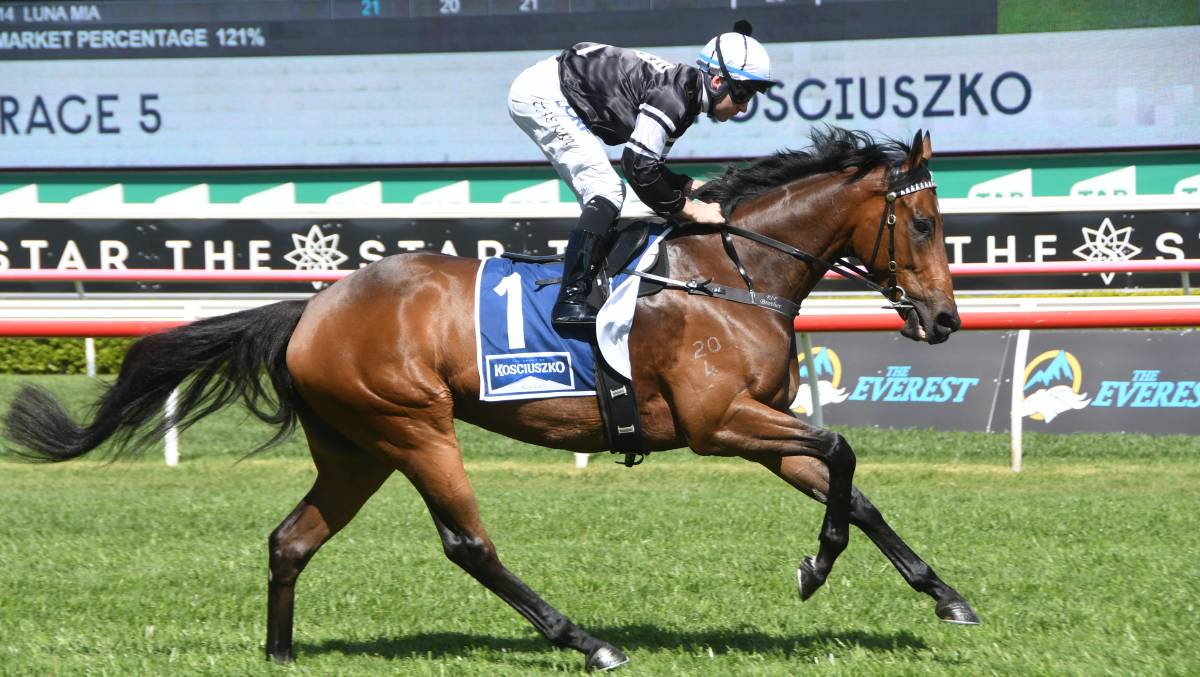 Victorem (and Tommy Berry) finished second in The Kosciuszko in 2019. Photo Virginia Harvey.

"He's really come on (since his second in the Country Championship) - he was only a three-year-old then and he has developed and matured a lot since, and I am very happy with him," Colvin said.

"I am pretty confident that he (Another One) will get picked-up (by a slot owner) but we will see what happens," Colvin said.

The horse has a fan-club behind him with the publican of the Union Club Hotel, Pat McRedmond, having a share in the galloper.

"There is already a large syndicate buying tickets to get the horse in, but the lockdown hasn't helped and hopefully we (the State) will open up soon."

The Colvin stable has already tasted success this season with its home-bred Kaphero galloper Nic's Hero and Carnival Miss. 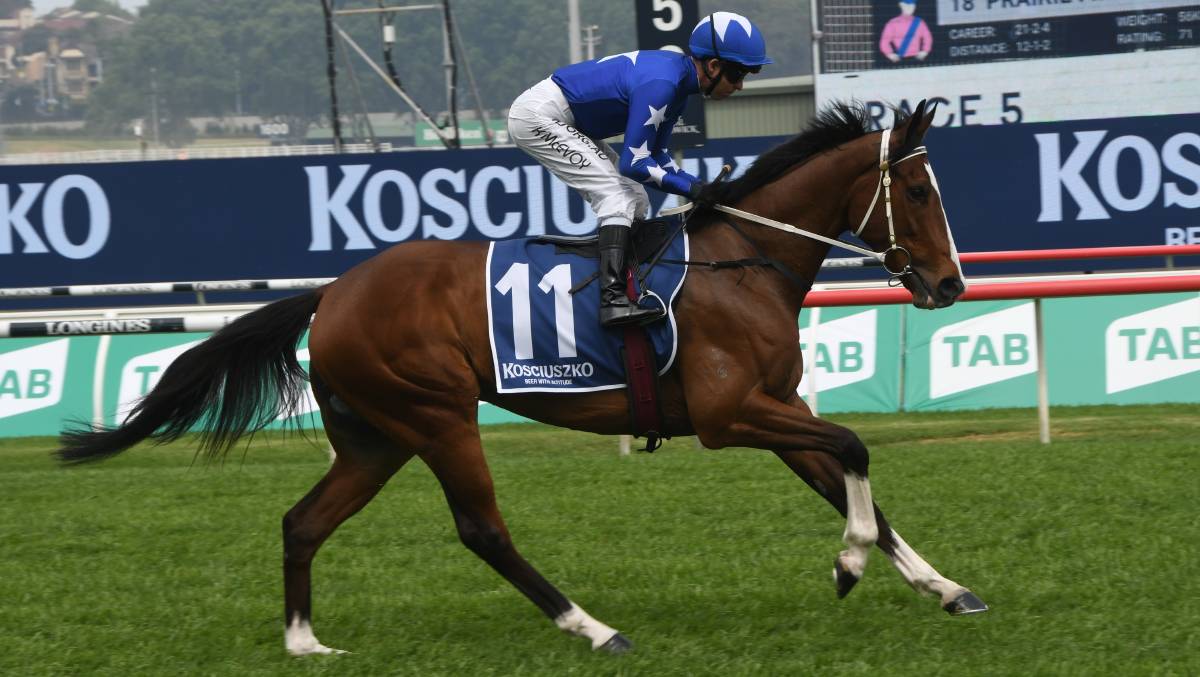 Second time around may prove more fruitful for The Kosciuszko contender Fender (with Kerrin McEvoy up) at Randwick. Photo Virginia Harvey.

By the Newhaven Park based I Am Invincible stallion Super One, Another One was bred and sold via Bowness Stud, Young, at Inglis' Classic Yearling Sale - Highway Session, for $18,000.

"I am not sure if he (Another One) will start again before The Kosciuszko, as I want him to go into the race fresh," Colvin said.

The Kosciuszko class act contender includes Victorem, an I Am Invincible gelding which finished second in the rich event in 2019. Trained at Port Macquarie by Jenny Graham, Victorem has won eight races including three at stakes level in Brisbane and $1.3m in prizemoney.

Last year's The Kosciuszko winner, It's Me recently returned to the Scone stables of her conditioner Brett Cavanough, and has not started since injury intervened following her Sydney feature victory.

Unbeaten in four starts, four-year-old It's Me (by Victorian based Snitzel sire Shamus Award) will be joined by stable companion Fender as hopeful starters.

Belonging to the first crop of Swettenham Stud shuttler Toronado, Fender has been competitive in Brisbane and Sydney stakes' class, and was third in Grafton's Ramornie Handicap-LR.

HOW much have online Thoroughbred auctions - no matter which auctioneering company, have become an tool for breeders and race participants to sell and buy horses during these Covid-19 times.

By Coolmore Stud's high-profile stallion So You Think, Fasika sold for $920,000, to Victorian based bloodstock agent Suman Hedge Bloodstock, the mare due to have a "date" with the now Yulong Stud, Victoria, based champion sire Written Tycoon this season. However, the online selling platform's highest priced horse - and a world record, belongs to Group 1 winning mare Funstar, which Inglis Digital also offered and sold via its website avenue in July for $2.7m.

NEXT week's Thoroughbreds will include the Spring Sires Edition. Focusing in first foals of some young stallions at stud, it will also highlight varying sirelines which will help a broodmare owner who may still be pondering which stallion for their mare this season.