A passion for growing fresh vegetables which was passed down from her grandparents has led Cheryl McGaffin to create an award-winning Heirloom tomato operation on her eight-hectare (20 acre) Mornington Peninsula property. 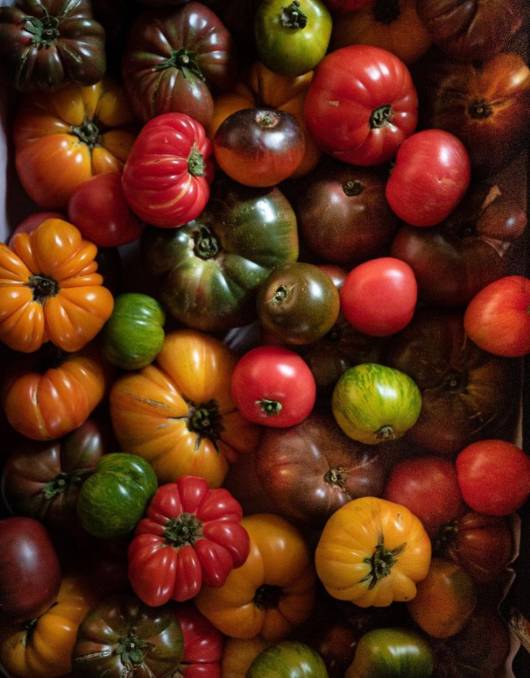 PRIZED: Some of the award-winning produce from Cheryl McGaffin and Daniel's Run Heirloom Tomatoes.

A passion for growing fresh vegetables which was passed down from her grandparents has led Cheryl McGaffin to create an award-winning Heirloom tomato operation on her eight-hectare (20 acre) Mornington Peninsula property.

Cheryl spent years as a nurse, growing tomatoes as more of a hobby.

In her own words that hobby got out of control with the Heirloom tomatoes continually crossing with Cheryl stabilising the cross and growing them out. From this, Daniel's Run Heirloom Tomatoes was born.

"Tomatoes have always been a passion, one that was influenced by my grandparents who grew all their own vegetables and who were especially fond of growing their own tomatoes," Cheryl said.

"Their backyard and an adjacent vacant block of land were full of vegetables and tomatoes and even as a young child I would help out with the growing, watering and harvesting.

"There was always a lot of excitement when the first tomatoes of the season would start to ripen.

"On the Mornington Peninsula, our season starts later and the first tomatoes come in around Christmas time.

"So tomatoes seemed to be associated with Christmas - a double bit of excitement when you are young!"

Daniel's Run only grow their tomatoes outside and therefore the harvest is determined upon the weather.

"We are only small scale really, preferring quality over yield," Cheryl said.

"A wet cool spring will delay our planting, usually resulting in a reduced harvest, while a warm dry spring will result in an earlier planting and a better harvest of around the two tonne mark from between 160 to 180 plants."

Being subject to weather can also put a strain on the Daniel's Run harvest from a pest and disease perspective.

"We use integrated pest management to help with the biological control of insects, mainly caterpillars and thrips," Cheryl said.

"Predatory wasps and mites are brought in to control these and work very well, along with close monitoring of pest populations.

"Fungal diseases can arise in wet or humid seasons.

"We've managed those with biological sprays including bacillus subtilis and we make lactic acid bacillus to use as a foliar spray as well as a leaf mold fermentation made from the tomatoes of our previous crop.

"This is allowed to ferment all winter in preparation to use the following season.

"Organic management and a no till sustainable farming philosophy in relation to the health of our soil helps to minimise the impact of these diseases, along with generous plant spacing to maximise air flow, and reduce plant stress."

At Daniel's Run, the previous year's harvest also plays a role in the next one.

"We sow our own tomato seeds around the middle of August," Cheryl said.

"Planting will occur anytime up to the eight week old mark, weather dependent.

"The varieties differ each year, depending on those needing to be sown for viability reasons and those open pollinated crosses that occur.

"They all have their own inherent disease resistance and weather tolerances and this helps to spread the risk should a poor weather season eventuate.

"Most of our field preparation occurs during the off season, so by the time it comes to planting time, around late October to early November, there is little to do but plant, stake and cage for supporting the plants.

"Compost is spread and green manures are sown in May, crimped down in late September and mulched with Lucerne hay.

"This deep mulching system means our plants can be dry farmed with no use of irrigation after establishment.

"The tomatoes are planted deeply and have an additional nine litre bucket of compost each and then receive no further feeding for the rest of the season.

"Pruning of the plants is formative, just in the early stages to around three leaders, and growth gets to around eight to 10 feet.

"Harvest depends on the varieties, as we plant early/mid and late varieties.

"Early varieties are harvested at the 60-65 day mark in mid to late December.

"Late Varieties will start from March and can go through to May."