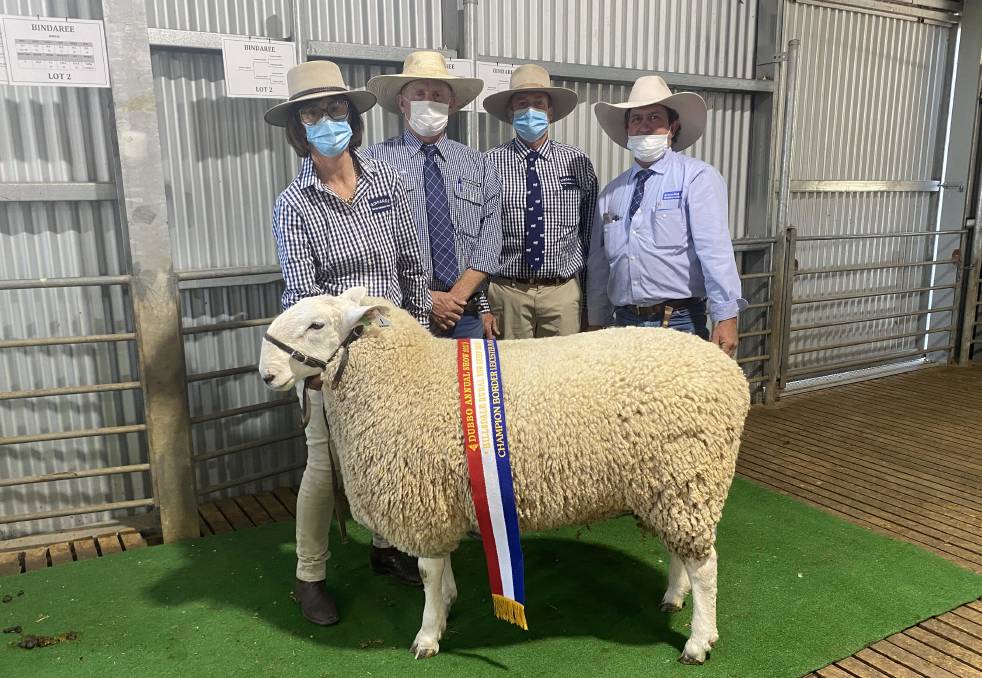 Reg and Robyn Sweeney with the top-priced ram B200284 which sold for $12,000 with Angus Stuart, Milling Stuart, Dunedoo, and Jason Hartin, Hartin Schute Bell. Photo: supplied

Flock rams were a highlight for this sale with the average smashing the studs records by $2113 on last years' to achieve an average of $3492.

ALSO IN NEWS:Darriwell Poll Merinos and Merinos hits a heft $20,000

The twin-born ram was sired by Coolawang 150090 and weighed 120 kilograms with great carcase, width and bone. He had figures of 0.5 for birth weight, a yearling greasy fleece weight (YGFW) of 5.5 and a post weaning weight (PWWT) of 11.5.

Selling for $8500 was the second top-priced stud ram, Nundoone 200115, who also sold to Jeff and Diane Sutton of Wattle Farm stud.

Another twin-born ram, he was sired by Bindaree 144482; the previous junior champion ram winning ram from the 2015 Australian Sheep and Wool Show, and weighed 106kg. He was described as a moderate frame ram that displayed correctness and width.

IN OTHER NEWS: Surge in sheep numbers ends as numbers drop by nearly 20 per cent on AuctionsPlus

He had figures including a 0.1 birth weight, a yearling greasy fleece weight of 6.6 and a post weaning weight of 6.7.

Flock rams were a highlight for this sale with the average of $3492 smashing the studs records by $2113 on last years' result.

The top-priced flock ram was a Nundoone flock ram which sold for $5200 to the Mallon family, Quambone, who were the volume buyer securing 12 rams to average $4225.

We were very pleased with the sale results and would like to thank all clients for their support. - Rowena Munro, Nundoone Border Leicester stud

"Due to demand, we have bred up numbers to have a higher number of rams on offer at next years on property sale," she said.

"We were very pleased with the sale results and would like to thank all clients for their support."

The sale was conducted by Milling Stuart, Dunedoo.