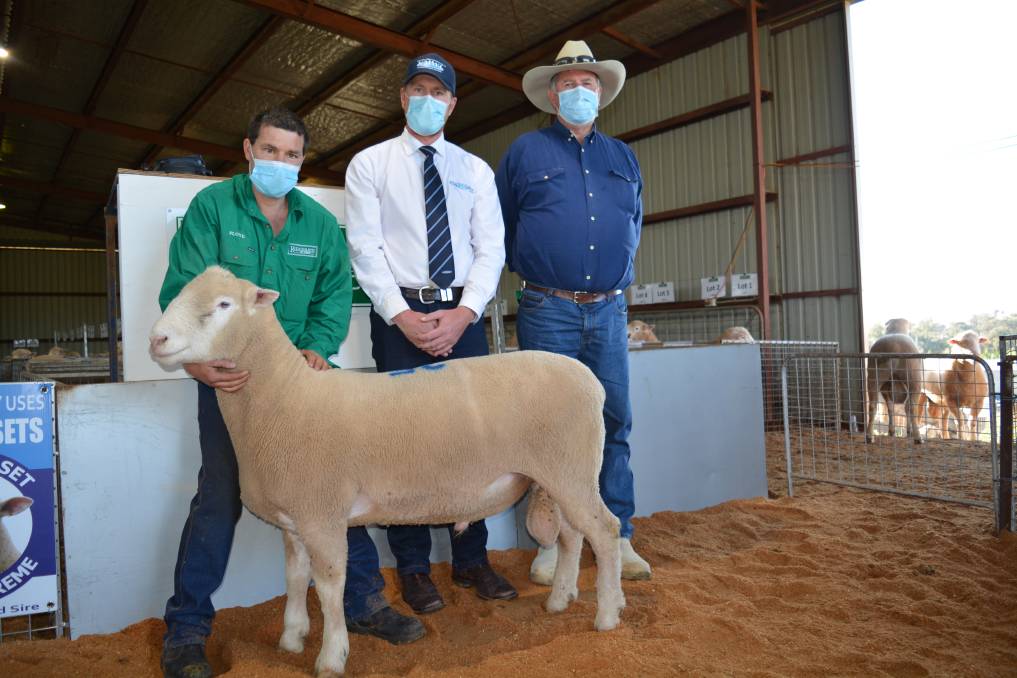 With a quick reminder from the auctioneer of how impressive prime lamb prices are of late, bids at Thursday's Ridgehaven Poll Dorset ram and ewe sale at Cudal quickly took off, reaching $4000 in the first half dozen lots and topping overall at $4600, twice.

All up, 139 of the 144 rams offered were sold at auction and included the two $4600 lots to average $2423, with all the passed-in rams selling immediately afterwards to bring the day's overall average to $2304.

It scanned a 48 millimetre eye muscle depth and 104mm width and was one of two bought by Ian Frecklington, Peak Hill, for his flock of 400 or so Poll Dorset and crossbred ewes.

"I thought he was the one that will put the most money in my pocket. He was the heaviest for his age - that's the thing that makes you money," he said.

"He's nearly 30 kilos heavier, and that's worth a lot of money to me."

He said this ram was bought as a mate for the sale topper, especially during their settling in period, but will still see plenty of use in the flock.

The season had been kind at Peak Hill, with Mr Frecklington saying in the previous two rain fronts he's had 27 and then 49 millimetres and the countryside looked magnificent.

The second ram at $4600, the August 2020-drop twin, Ridgehaven 201027, came midway through the sale and sold to interstate buyer, Wrattenbullie Farms Trust, which is run by Rod, Gayle Brad and Alana Davies in the Wrattonbully District near Naracoorte, SA, and includes a Poll Dorset stud selling about 130 rams annually.

The top-priced stud ewe, Ridgehaven 190523, was one of six bought by Brendan Mansbridge, Tymon stud, Eugowra.

The first lot of the sale, Ridgehaven 200171, described as a big, thick carcase ram, was sold for charity, raising $3200 for the Salvation Army.

The sale was conducted by KMWL and Company, Forbes on behalf of vendor RB and JF Legge Partnership (Ridgehaven) with Luke Whitty and Brendon White as auctioneers, as well as online through AuctionsPlus.