The Tamworth school set a new stud record average of $3474 at Wednesday's sale. 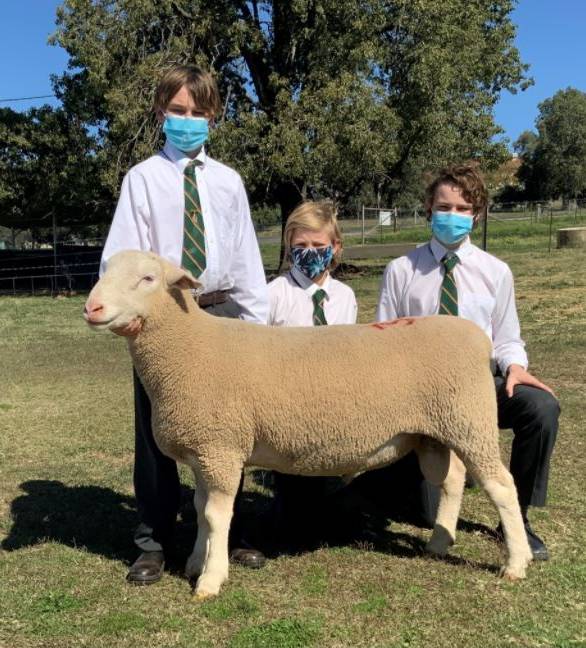 THE ongoing COVID-19 pandemic may have forced Farrer Memorial Agricultural High School to hold its 27th annual White Suffolk ram sale exclusively online but it could not dampen it's success.

A new stud record average of $3474 was set as all 50 rams offered were snapped up by buyers from across the country.

Tuning in via AuctionsPlus, stud buyers were well represented, taking out 15 rams including the $11,100 top ram, which was purchased by Anden White Suffolk stud, Woomelang, Victoria. The underbidders were Wilson's Creek White Suffolks, Uralla.

Farrer White Suffolk stud principal Darren Smith said the top price ram was long, deep bodied with outstanding growth and muscle in the loin and hindquarters, had a strong topline, smooth shoulders and a good twist.

"The Donnan family have purchased rams from us before, so it was really nice to see them return this year," Mr Smith said.

"I think this ram was a real standout and I'm confident he can do a good job for them."

"I think he's got good figures in terms of muscling, growth and I think he is a very smooth-looking ram," Mr Donnan said.

"Darren was really helpful in giving us an accurate idea of the ram, given we couldn't be there in person.

"From here, we will get him collected for insurance reasons, then he won't be used until about January.

"We don't usually have rams around, we generally use ram lambs and buy a ram every now and again, but I think he will be pretty well suited to our operation."

The top-priced ram was not the only one going to an interstate stud as the second top price ram sold for $7500 to Ida Vale White Suffolk stud, Boscabel near Kojonup, Western Australia.

Mr Smith said he was grateful of the support of many repeat buyers and proud of the effort his students put into achieving a new stud record sale average.

"Majority of the kids that take part in the program couldn't be here for the sale unfortunately, but they have done a fantastic job getting the rams ready for the sale," he said.

"I thank the students for their commitment, effort and interest in striving to continually improve the Farrer White Suffolk sheep and stud.

"Special mention also to the farm staff for their continual assistance with the sheep and support of the students in undertaking the many husbandry duties."

The online sale was conducted by Garvin and Cousins, Tamworth.