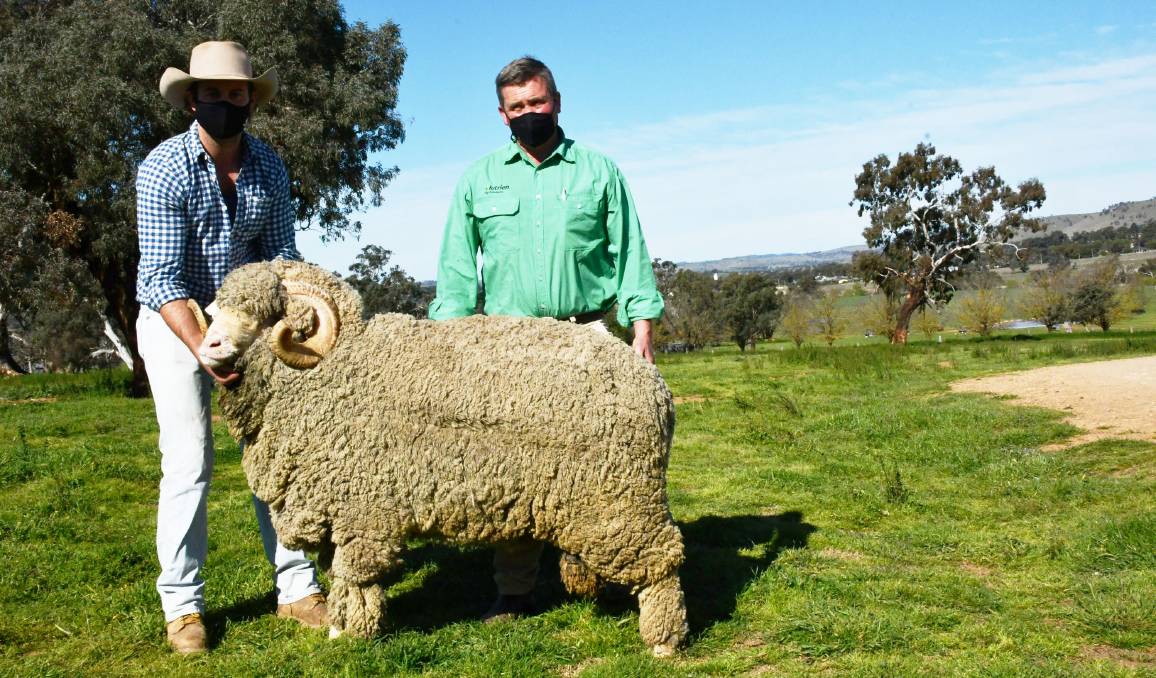 Merryville Merino stud at Boorowa have topped at $5250 and averaged $1872.

Stud rams ear marked for the Australian Sheep and Wool show lead the annual Merryville Merino ram sale to a top of $5250 on Friday.

As New South Wales gets ready to come out of lockdown in various regions, the challenge of interstate borders closures continued to create challenges for many ram buyers at the Merryville Merino ram sale on Friday.

The top ram was an 18 micron ram from the Ringmaster Syndicate sire, with a 3.3 standard deviation, 18.3 coefficient variation and a 99.5 comfort factor.

He was bought by Neil Collins, Hunterston via Yarran, Victoria, who runs 2000 Superfine Merino ewes, averaging 16.5 micron and has been on Merryville bloodlines for 60 years to chase progeny that can produce top quality wool for the Italian trade market.

Mr Collins said he knew of the ram and nearly bought him a few months ago, but decided to follow him through until sale day and now had the challenge of getting him over the border.

Demondrille Merino stud paid $4500 for one of the second top priced rams, which happened to be a poll ram by the Uniform Poll 17th sire at 18.2 micron, with a 2.5 standard deviation (SD), a 13.7pc coefficient of variation (CV) and 99.8pc comfort factor (CF).

Volume buyers then kicked in when the Morse family, Spire View, Coonabarabran, set a solid floor in the market buying 20 rams to a top of $1500 and averaging $1100 across their draft.

The sale was conducted by Elders and Nutrien, with Steve Ridley and Rick Power as the auctioneers.

Sponsored by
Aviation industry moving towards compulsory vaccination
Test
Rural Australians have reacted with alarm over a fine dished out to a Queensland man for carrying a pocket knife.
Test
NSW winter crop production is forecast to be the second-biggest on record.
Test
There has been an apparent breakthrough in the global race to copy meat in the laboratory.
Test
AFPA NSW welcome announcement but say it is not a long-term solution to supply concerns.
Test
An online sale failed to dampen enthusiasm for The Glen Angus, with a $2000 jump in average price.
Test
Repeat buyers turned out in force at the Poll Boonoke/Wanganella ram sale
Test
Local and interstate commercial woolgrowers snapped up the entire draft of 120 Poll Merino rams to a top of $7500 and to an average of $2354.
Test