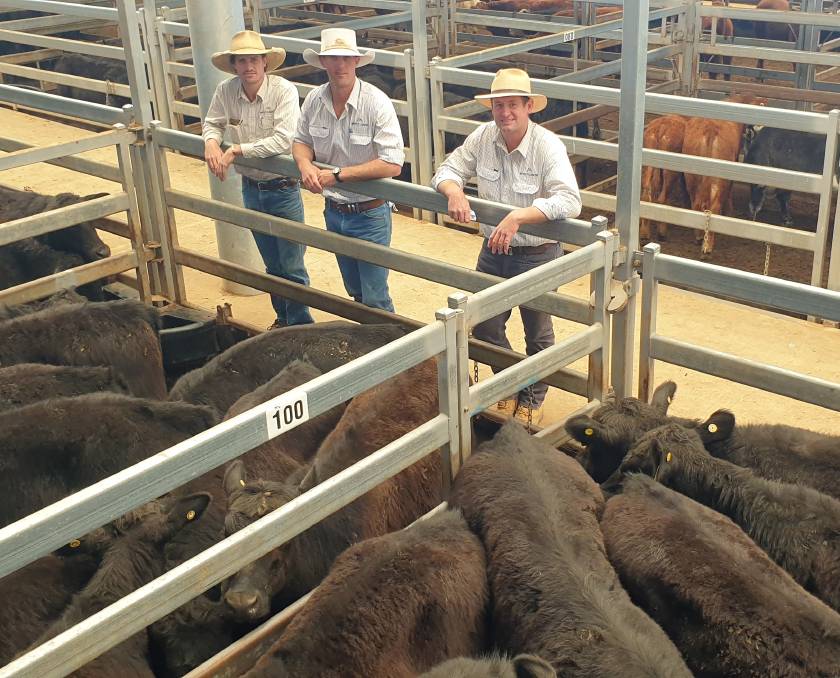 PRICES at the first Tamworth store cattle sale of spring rose as about 1800 head of cattle were yarded which was down about 200 from a fortnight ago.

An easing of COVID-19 restrictions for the Tamworth local government area allowed more vendors and buyers to attend the sale at the Tamworth Regional Livestock Exchange (TRLX), which in turn helped drive competition.

Prices for weaner steers increased from $1900 a head at the August 27 store cattle sale, to a top of $2130 for 10- to 12-month-old Angus steers offered by local producers Mountain View Ag, Bendemeer.

It was a similar story for yearling steers as a run of Angus/Santa Gertrudis steers offered by T and T Martin, Guyra, topped the sale at $2300, up from $1940 at the last sale.

Ian Morgan Livestock stock agent Ben Goodman, Quirindi, said most steers sold from the $2300 high to as low as $1100.

"The best of the yearling steers were some Angus-cross steers which made $2300 while the best weaner steers made $2130 for some Angus weaner steers," Mr Goodman said.

"Although the market was strong, there was still the ability to buy cattle for between $1100 and $1400, which producers are finding helpful.

"There was some strong competition mainly made up of locals with some orders from away including the Central Tablelands and western NSW.

"With the value of cattle at the moment, producers are able to buy some cattle at a reasonable dollar rate to get a good return."

It was a similar story in the heifer category, which Mr Goodman remained strong despite slipping from a $2200 high at the last sale to a top of $2150 for "some nice black heifers" which were also offered by T and T Martin, Guyra.

Most heifers sold for similar prices to the steers and ranged from the $2150 top for yearling heifers to about $1200.

Despite steers and heifers making up the majority of Friday's yarding, prices for the limited number of cows with calves as well as pregnancy-tested-in-calf cows remained strong.

"Purtle Plevey Agencies, Manilla, lead the best of the cows with calves which made $3325 (a unit) for some Charolais-cross cows out of CTK Cattle Company, Barraba," Mr Goodman said.

Much like the cow and calf market, which was up from $2900 at the previous sale on August 24, PTIC cows were also up from $2675 to a top of $2825 for two-year-old Santa cows pregnant to a Santa bull offered by Spring Creek Santas, Crooble.

Other auctions highlights during the sale of the limited PTIC yarding, which sold from about $2500 to the $2825 top, included a draft of Angus cows pregnant to an Angus bull offered by the Clarke family, Narrabri, which sold for $2670.

The auction was conducted by selling agents from the Tamworth Livestock Selling Agents Association operating at TRLX.